Will the Citizenship (Amendment) Bill, 2019 Sail Through in the Upper House This Time? 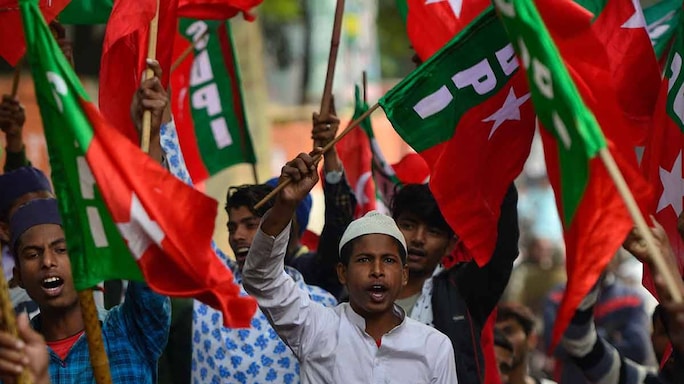 Supporters of Social Democratic Party of India (SDPI) shout slogans during a protest against the Citizenship Amendment Bill, a bill approved by India's cabinet to give citizenship to religious minorities persecuted in neighboring Muslim countries, in New

Cleared by the Union Cabinet on December 4, 2019 the Citizenship (Amendment) Bill, 2019 (CAB) is due to be tabled in the Parliament during its winter session on December 9. Let’s take a look at how political parties and their stands have ebbed and flowed on this controversial legislation.

The proposed Citizenship (Amendment) Bill, 2019 (CAB) aims to  amend the Citizenship Act, 1955 and change the definition of an “ illegal migrant” by granting Indian citizenship to undocumented persons from six non-Muslim religious groups—Sikhs, Hindus, Jains, Buddhists, Parsis and Christians—belonging to neighbouring Pakistan, Bangladesh and Afghanistan. The new draft legislation cleared by the Cabinet introduces certain new clauses and exclusions. Sixth Schedule areas in Assam, Meghalaya, Mizoram and Tripura and states with the Inner Line Permit (ILP) provisions—Arunachal, Nagaland and Mizoram—have been exempted from the law’s purview. The draft legislation has set December 31, 2014 as the cut-off date for non-Muslims from Pakistan, Bangladesh and Afghanistan, who do not have documents, to claim eligibility for Indian citizenship. This reduces the eligibility criterion for citizenship from the earlier 12-year period of stay to five years. The draft Bill also proposes that on commencement of the new Bill, all cases related to illegal migration and citizenship against non-Muslim illegal immigrants will stand abated. It also provides for persons of Indian origin to apply for citizenship by naturalization on completion of six years residency. The earlier form of the Bill—the Citizenship (Amendment) Bill, 2016, which though passed by the Lok Sabha, was blocked due to a lack of majority in the Upper House; didn’t contain these provisions.

Unlike the Citizenship (Amendment) Bill, 2016 which saw the opposition employ political will to force the institution of a Joint Parliamentary Committee and was greeted with a dissent note by almost every opposition party, the new draft, observers say, could sail through the Rajya Sabha this time. The Bill will be passed in the Lower house, where the BJP enjoys a large majority and with the political opposition to the Bill cracking, it looks unlikely to face stiff opposition in the Rajya Sabha.

Here is how political tack has shifted from the last time when the Citizenship (Amendment) Bill, 2016 was tabled.

India’s Grand Old party, which mounted a vociferous opposition to the Bill, seems to have softened its stand. Adhir Ranjan Chowdhury, the Congress leader in the Lok Sabha issued a statement at a press conference saying that the Congress would make a decision on its stand regarding the Bill after studying the Bill’s form and manner. Voices of dissent were clearer from Congress leaders Shashi Tharoor and former Assam Chief Minister Tarun Gogoi. Tharoor denounced the Bill as “fundamentally unconstitutional” and reiterated that “religion cannot determine nationhood”. Gogoi’s contention was that the passage of the Bill would affect culture and political power dynamics in Assam and indicated that the party’s state unit would move the Supreme Court against the Bill as it was in violation of the provisions of the 1985 Assam Accord.

However, the strongest note of dissent was issued by the CPI(M) general secretary Sitaram Yechury, who attacked the CAB on the grounds that it was “aimed at destroying the basis of India”. He tweeted, “India’s citizens are its citizens, irrespective of what faith they follow or don’t, what they eat, what work they do, their caste, creed, place of residence, gender or colour of skin.”

Those Backing the Bill

Coalition partners of the Bharatiya Janata Party (BJP), the Shiromani Akali Dal and Lok Janshakti Party are expected to back the Bill. The Shiv Sena, the BJP’s oldest ally, until the recent power struggle in Maharashtra, continues to back the Bill. The Akali Dal has also stated its support for the Bill. The Biju Janata Dal, Telangana Rashtra Samithi and Yuvajana Sramika Rythu Congress are expected to lend support to the Bill. The Bodoland People’s Front and the Naga People’s Front with one member each have voiced their support, following Home Minister Amit Shah’s assurances of protection of Sixth Schedule areas from the purview of the Bill.

The Trinamool Congress, which had staunchly opposed the Bill thus far, has refrained from stating its position, with floor leader Derek O’ Brien stating that the party’s position would be “shared on the floor of both Houses”. The AIDMK has also refrained from expressing its stand before obtaining a copy of the Bill. Key ally Nitish Kumar’s Janata Dal (United), which had staged a walkout during the passage of the earlier draft of the Bill in the Lok Sabha seems to have changed tack following discussions with parties from the North East and is speculated to either abstain or walk out, helping the passage of the Bill.