Why We Can't Spell

English is filled with foreign words, multiple ways to spell the same sound, and general weirdness. We do very well, considering all that. 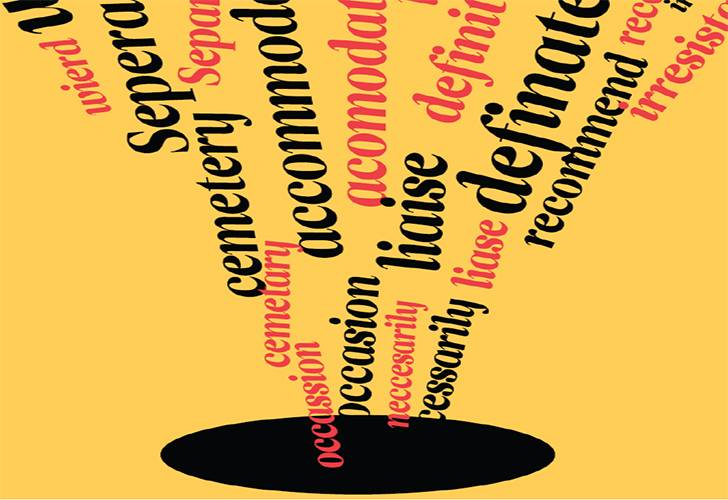 People in my line of work are meant to be pedantic about spelling, but I can't do it. English is so filled with ridiculous ways to spell words that it's really a wonder any of us can spell anything at all. Consider that we read a book, or have it read to us, but we lead a horse, or have it led to us. Most of us say dis-sa-pear, but it's spelled dis-ap-pear; same for the words we often hear as seperate and definately, but which are spelled separate and definitely. Basically and publicly sound as though they should have the same endings, but don't, while clever, kind and quite start with three different letters, but the same consonant sound.

There are three reasons for all the complexity. The first is that English is a hodgepodge language: some words have been imposed upon us by sundry invaders (Romans, Vikings, Normans, and, socially, Americans); others begged, -borrowed or stolen as required. It's not that there aren't rules, it's just that there are rules that apply only to the Latinate words, or the Germanic words, or French words… Actually, for a lot of Old English words, it is that there's not much in the way of rules-they were spelled however seemed right and no one argued the point because most people couldn't read and those who could all had swords.

But while we, for example, might think that a good general rule is "add an S to make a plural," a lot of Greek and Latin words change their ends for plurals instead: bacterium becomes bacteria, medium/media, basis/bases, stimulus/stimuli.

Many Germanic words that came into English early on use vowel shifts to make their plurals: man becomes men, mouse becomes mice, goose becomes geese. Moose, on the other hand, is an Algonquin word from the New World, so it doesn't become meese. English-French words tend to have plurals and, indeed, general spellings that have been made more "English," but only recently. Peers of Jane Austen would be forgiven for writing "she felt a strong connexion with the owner of so many chateaux" rather than -connection and chateaus. In fact, most "odd" letter combinations in English often come -directly from the root languages. If you know that manoeuvre comes from the French, it's easier to guess how it's spelled, because you're more likely to think of combinations like ma(i)n (hand) plus oeuvre (work).Similarly, those tricky -ible endings go with most Latin words, while -able endings go with almost all others. The word diarrhoea* seems unnecessarily cruel in English, but is spelled in a way that would make perfect sense to an ancient Greek.

It's still happening. Recent loan words like furore have the same problems as older ones. In many -traditional parts of the Anglosphere, it's pronounced fu-roar-re, which is close to the original Italian and a good clue to spelling it. Speakers in other parts of the world say something closer to 'few-roar', but only the Americans drop the final E to spell it furor.

While making it hard to spell, this kleptomania has at least made English easy to learn: most speakers of other languages can find a few words and rules they already know.

The second reason is English's unwillingness to ever let go of a spelling once we've got it right. Just look at the Germanic plurals-children, teeth, oxen-that were popular enough to survive intact through centuries of language reforms under Viking and then Norman invasions.But it also appears in words like knight, which was once pronounced k'nich-t. Back then, what looks like a ridiculously complicated way to spell the word we say nite was a genuine guide to pronunciation.

Food, good and blood all have -different vowel sounds to modern ears, but for centuries they rhymed. A process called the Great Vowel Shift was responsible for this change, and it's the reason we could probably -understand Shakespeare as read in the 16th century without much effort, but not Chaucer as read in the 14th. A great many words with similar spellings once also sounded the same, even though their sounds have since changed, which is why love and prove are frequently rhymed in Elizabethan plays and poetry, but now just confuse people learning to spell them.

Out to Trick You

And then there's the final reason spelling is hard: a lot of the "rules" are more in the way of guidelines. Even the -ible, -able distinction mentioned earlier has a number of exceptions like dependable.

Some "rules" are really just big fibs, like "I before E except after C". Weird, eight, beige, foreign, seize, -leisure, deity, their, ancient, -glacier, science, society and species are just 13 of the many words that put lie to that one.

And as if all this wasn't enough, there are two major competing "brands" of English on the market, British and American. Both have their pluses: the US-style of using the one practice for all occasions is perfectly sensible, as is center over centre (though why they ditch French spelling and then say 'erb for herb is beyond me). Losing all those extra U's and -me endings must save a lot of paper over the course of a year.

But UK leukaemia gives you a better guide to pronunciation than US leukemia and the US maneuver is still hard to spell while losing all the French clues for manoeuvre. And while the argument for standardizing offense and defense to go with -se endings like sense looks as though it's reasonable, they still write fence.

So What to Do?

In many ways, we are more literate these days than we have ever been. Sure a search for definately gets 7.6 million Google hits, but the top ten are all saying "it's DEFINITELY!" With spellcheck and dictionaries more readily available than ever before, do we still need to learn to spell?

Yes and no. Mistakes aren't -indicative of intelligence: geniuses can be dyslexic, even Shakespeare was rubbish at spelling. And a lot of errors are down to inattention or poor typing.

Informally, in notes, SMS and blogs, it matters little as long as it doesn't create confusion: "I fel out of the bote" is perfectly clear, but "I hid to go to cawt" is much less so. Standardized spelling's greatest strength is that it brings clarity.

The thing that accurate spelling does show is diligence. If you're willing to take the time to learn liaise and not liase and the difference -between compliment and complement, then you're someone who cares about details and who will take time to check them. And if you're writing a job application, or a formal letter, or an article on spelling, then that matters a great deal.

Good spelling also reassures us when it comes from an "authority": a book, a magazine or the government. If they have taken the time and effort to spell well, then we believe they've also checked their other facts and figures. Bad spelling in the same contexts makes us suspicious.

But even there, I still think no one should be expected to spell diarrhoea correctly on the first go.