Why Are India's College Campuses Erupting In Protest? 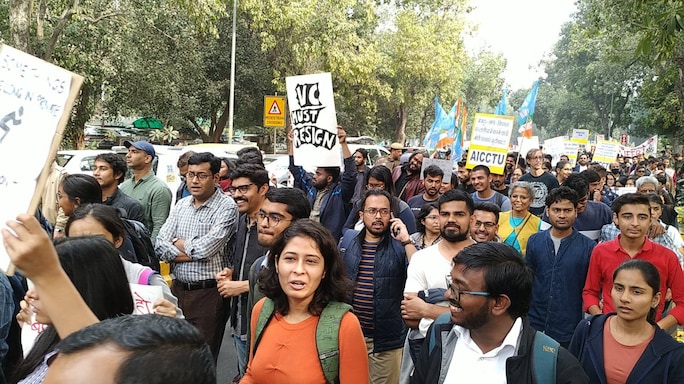 As Delhi’s Jawaharlal Nehru University protest against the 300 per cent fee hike enters its fifth week, the JNUSU (Jawaharlal University Students Union) has appealed to all students and youth across India to join them to mark the ‘National Protest Day’ defending affordable and accessible education on November 27 and to organize any form of democratic protest at their respective institutions or areas. Last Friday students formed a human chain within the campus, demanding a complete rollback of hostel fees As hundreds of students, academics and members of civil society raised slogans and marched towards the Parliament against the hostel and mess fee hike in JNU last week, not very far away from the venue, at the All India Institute of Medical Sciences (AIIMS) the Resident Doctors Association strongly opposed the proposal to review tuition fees and user charges for various diagnostic procedures. Social media and news channels were abuzz with images and video clips of Delhi Police “brutality”—the image of the visually challenged student Shashi Bhushan being kicked and punched, and reports of young women being pushed and groped are still raw and alive. Delhi’s student protests—especially that in JNU and AIIMs—get a lot more airtime, however the truth is that students across the country are up in arms protesting against policies that would affect the student community adversely and also defending rights, such as the one of a Muslim professor to teach Sanskrit.

Here are some other student protests from around India that you must know about.

Earlier in November, M.Tech and PhD students at IIT Bombay staged a protest against reforms approved by the IIT Council in September, which recommended that M.Tech tuition fees be raised from ₹ 20,000 and ₹50,000 to ₹2 lakh gradually. The council also decided that it would stop the monthly stipend of ₹12,400 given to M.Tech scholars despite qualifying for it on the basis of the Graduate Aptitude Test in Engineering (GATE) score. The students of IIT-Bombay organized a meeting in solidarity with students from IIT-BHU who had called for a national level protest against the M.Tech proposals, a day ahead of HRD Minister Ramesh Pokhriyal’s visit to the campus. A petition has been filed on change.org demanding a rollback, calling the council’s decision detrimental to research and higher education.

Ayurvedic Colleges In Uttarakhand Protest Against 170 per cent Fee Hike:

Different private Ayurvedic medical colleges in Uttarakhand have been protesting for weeks against an almost 170 per cent fee hike, implemented with retrospective effect. Even though the Uttarakhand High Court had last year ruled that the fee hike order should be reversed and the amounts already paid by students should be refunded, the order has not been implemented. The tuition fees for Bachelor in Ayurvedic Medicine and Surgery (BAMS) taught in 13 private institutions had been increased from ₹80,000 a year to ₹2,15,000.

Two Indian Institute of Technology (IIT) Madras students were on indefinite hunger strike after first-year student Fathima Lateef committed suicide on November 9, demanding that the college management conduct an internal inquiry as sought by the family of Fathima Lateef. Fathima’s father, Abdul, in an interview had said Fathima had not left any suicide note but her sister had found notes on her phone in which some professors were blamed for ‘harassing’ her on the basis of her religion, which could have pushed her to take the extreme step. Even though the hunger strike has been called off after the institute agreed to get the matter investigated, the students have demanded that the report be made public and have launched the ‘Forum for Justice’ to address and give voice to their grievances.

In a bizarre turn of events, a group of students started protesting against the appointment of a Muslim applicant (Firoze Khan) as an assistant professor in the Sahitya department of the Sanskrit Vidya Dharm Vigyan (SVDV) and made headlines for their open communal bias. However, they called off their demonstration after their meeting with BHU Vice-Chancellor Rakesh Bhatnagar, said that Khan’s appointment was in “accordance with BHU Act and central UGC guidelines.” Even as religious prejudice thrived, another group of students marched on campus in support of Firoze Khan.