It seemed impossible that anyone could be left alive. But an inner voice kept telling Nico that there was hope The handsome 30-foot-long cabin cruiser bobbed at anchor in the crystal-blue water of the Adriatic, about 180 metres off the southern Italian coast. “You’ll see, it’s an incredible sight,” Antonio Giovine was telling his German friend Horst Hartmann. The day before, Antonio had gone scuba diving off the small coastal village of Polignano a Mare where they were vacationing. In an underwater passage in the reef, he had found a cave where fresh and saltwater mixed, creating strange optical effects.

On board the boat with Antonio and Horst was a group of relatives and friends, including Luciano, Antonio’s brother and the owner of the boat. Horst, a cheerful airport employee from Frankfurt, Germany, and Antonio, both 27 years old, had been friends for years and often spent holidays together. Both shared a passion for scuba diving. Antonio was self-taught, while Horst had completed a diploma course back home.

Luciano and Antonio had double air tanks, holding around 100 minutes of breathing time. Horst and a German friend had only one tank, or 50 minutes’ worth of air. But since they would dive no deeper than 30 feet, it was more than enough to take a quick look at the cave and get back to the boat. Horst was bringing his underwater camera and a flashlight. It was 3:30 on a beautiful August afternoon.

“Okay, let’s go!” Antonio shouted, flipping backwards over the side. With Antonio in the lead, the four divers moved parallel to the reef for almost half an hour, while Antonio searched for a gap. He was about to give up when he found it and signalled the others to follow. Now they’d been underwater for 45 minutes. Horst and his friend were already using their emergency air supplies.

Antonio pointed to the tunnel as if to ask, “Are you going in?” Horst’s friend shook his head and motioned he was going back to the boat. Luciano would go with him. But Horst nodded enthusiastically. Antonio hesitated, but decided there was no problem. The cave was only a few metres inside the tunnel. It would take his friend little time to reach it, shoot a couple of pictures and resurface.

Antonio remained below, and watched Horst approach the cave entrance and switch on his flashlight. Then, with a thumbs-up sign to his friend, he slid into the inky darkness. As the minutes went by, Antonio started to feel a hard ball of tension in his stomach. Horst is sure taking his time, he thought. What on earth is he doing? Has he forgotten he is on reserve?

Kicking out with his fins, Antonio started into the hole. Just then he caught a glimmer of light ahead. It grew stronger. It was Horst. Thank God ... Antonio started to think but stopped in mid-thought. Horst was only three or four metres away, but the flashlight beam was dancing erratically. There is something wrong!

Before he knew it, the German was on Antonio, grabbing for his air hose, trying to pry it from his mouth. Instinctively Antonio tried to pull away. Then he realized Horst wanted to share his air. It’s called buddy-breathing—one mouthpiece is passed between two divers, one exhaling while the other breathes in. He must be out of air, Antonio thought. He opened his mouth to release the hose, but Horst, in his frenzy, knocked Antonio’s mask off. Unable to see or breathe, his lungs almost bursting, Antonio turned to his last resort: sucking the air directly from his reserve tank.

On the verge of blacking out, Antonio wriggled out of his backpack harness and opened the tap on the tank. A jet of air geysered out. He tried to inhale it but coughed on a mixture of air and water. The regulator’s outlet valve must have gotten fouled. Antonio pulled on his air hose, and it came back. He inserted the mouthpiece but immediately started coughing again. He couldn’t last much longer. Where is Horst? He prayed his friend had made a breath-held dash for the surface.

Paddling through the muddy water, his backpack clutched to his chest, Antonio found Horst’s flashlight, lying on the bottom, and picked it up. Ahead the tunnel floor sloped gently upwards. It had to be the way out. His legs thrashing, Antonio made for the exit. Any moment he would see daylight.

The tunnel began climbing almost vertically. Antonio sucked hard on the mouthpiece, but there was nothing left. He dropped the useless tanks and swam for the exit with his last strength. Antonio’s head broke the surface, and he gulped huge breaths of air into his burning lungs. But where was the bright blue summer sky? Looking up, he saw only solid rock. The space around his head was not much larger than an upside-down wash­basin. He’d taken a wrong turn and emerged in a tiny air pocket in the reef. Without air tanks, he was trapped. He could only wait for death. He started to scream and went on screaming until he had no voice left. 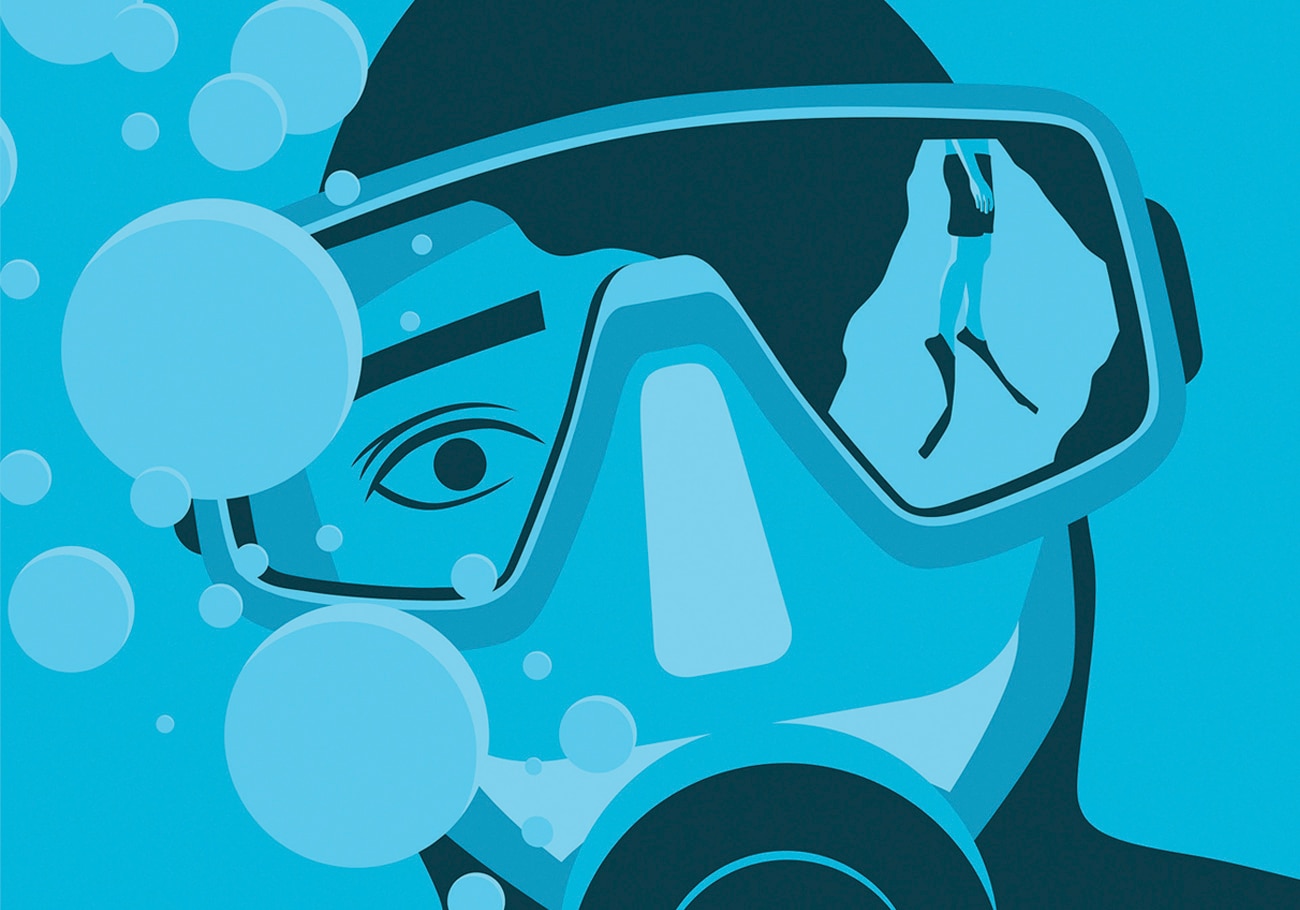 As the minutes passed and Antonio and Horst failed surface, Luciano knew he had to get help. He swam back to the boat and used his cell phone to call the nearest rescue squad, the fire brigade in Taranto, some 64 kilometres away.

Shortly after 6:30 p.m., Taranto’s head diver, 52-year-old Cataldo Paladino, entered the tunnel. Twenty-five feet inside, his heart missed a beat as the beam of his flashlight caught a dark shape floating against the roof of the passageway. It was Horst. He was dead.

Cataldo, used all his strength to push and pull the body out of the tunnel. He knew two men had entered the reef, and his years of experience told him the other diver, lost even further in the maze, must be dead too. He considered going back in but decided against it because of the incoming dark, the muddy water and the lack of help. Too risky.

Nico Fumai, chief frogman with the Bari Fire Brigade, was at home on his way to bed at 11:30 p.m. when the phone rang. It was headquarters calling: “Did you hear what happened out at Polignano? “ the duty officer asked.

“We need your help,” the officer told him.

“No problem,” he replied.

He called his three other dive ­team members. “Rendezvous tomorrow morning at 5:30 am,” he told them.

At his kitchen table, Nico began planning the next morning’s operations. The muscular 45-year-old veteran diver knew that hasty preparation could be fatal. He had had narrow escapes from death in the past. Each time, though, training and a cool head had saved him.

The thought that now entered Nico’s mind struck him with the force of a falling brick. Who said there’s a corpse inside the tunnel? That guy may be alive!

He called his team again. “Rendezvous an hour earlier, at 4:30.”

By 6:41 on Sunday, Nico’s team was positioned outside the tunnel on board a 20-foot inflatable dinghy. Nico was suited up and ready to dive. He had connected two air hoses to his twin tanks, so two people could breathe off them. His deputy would stay at the cave entrance and pay out the lifeline tied to his waist. As always before a dive, Nico prayed. Then he went overboard.

Antonio ‘dreamed’ he was drowning. Then he forced himself awake to find he was gagging: his throat was full of water. His head must have slipped underwater when he dozed off. He couldn’t feel his limbs anymore. The cold was taking over his body. I’m dying, he thought. He was too tired to feel scared. Dying was like turning off a computer, he decided. You switch it off, and the screen goes blank. No reason to be frightened.

Nico turned on his flashlight and entered the tunnel. Three metres, four. A fork ahead. He caught his breath. From a hole in the rock to the right, a huge, shining black eye stared at him. A conger eel. He tugged the rope twice to let his deputy know everything was okay and, keeping his gaze fixed on the eel, cautiously advanced down the first right fork. Ahead there was something glinting on the tunnel floor. A diver’s mask. I’m on the right track, Nico thought, pocketing the mask. Then he found Horst’s camera caught under a ledge. Getting closer.

The tunnel started climbing. He should be more than 18 metres into the reef, he judged. The walls around him now widened, and he found himself inside a narrow chamber. What his flashlight beam showed next stunned Nico.

Dangling between two massive rocks above him was a pair of pale legs wearing black fins. And one of the legs was moving! When Nico reached out to touch it, a hand came down and closed around his left wrist.

Nico knew the young man must be kept from panicking. Gently he passed the mouthpiece of his reserve regulator up over his head, through the surface of the water to where Antonio’s face must be. He heard him take a couple of breaths before handing the air hose back down. Antonio is trying to buddy-breathe with me, Nico realized. How incredible that, after 17 hours in this hole, he is still lucid!

Nico had to show Antonio he could keep the hose. He took the mouthpiece out of his own mouth and, holding this and the reserve, passed them both up. This time Antonio kept one hose and handed back the other. Pulling on Antonio’s arm, Nico coaxed him underwater. Now he saw the young man‘s face: pale, boyish features with a stubbly beard and flowing, shoulder-length hair. Antonio shook his head, his eyes wide with terror, and retreated back to the surface. Nico understood. Antonio wouldn’t submerge unless he could see where he was going. Luckily there was the mask he’d found. He handed it up. Antonio put it on and returned under the surface.

Nico slipped the guide rope into Antonio’s hand and pushed him headfirst into the tunnel. Antonio hadn’t enough strength to swim, so Nico had to keep pushing him from behind, checking at the same time that he was still breathing. The guide rope stayed taut as, outside the tunnel, his deputy picked up the slack. They made agonizingly slow progress. Linked to the same tanks, they had to move like Siamese twins. Finally, they came to the eel, which surveyed them from its den. Seconds later they were out in the blue-grey light of the open sea.

“He’s alive! He’s alive!” Nico screamed as they broke the surface. “Get some warm clothes.” The frogmen lifted Antonio’s limp body from the water and radioed for an ambulance. As they waited, the men rubbed and massaged Antonio. “You can’t die now,” Nico told him. “You’ve got to live.”

At the closest hospital, Antonio was treated for exposure, exhaustion and an oedema caused by near drowning. Doctors said he would not have survived more than another hour in the cave—hypothermia would have stopped his heart. When Nico finally climbed back into his van to head home, he doubled up, sobbing. He felt he had taken part in a miracle. Somehow an unseen hand that had guided Antonio to a tiny air pocket had guided him there too. Where he should have found death, he had met life.

On 13 September 1992, Nico Fumai and his men were awarded the prestigious international ‘Captain Courageous prize for bravery at sea. This article originally appeared in the June 1994 edition of Reader’s Digest.