Justice Bobde will be in office for the next 18 months 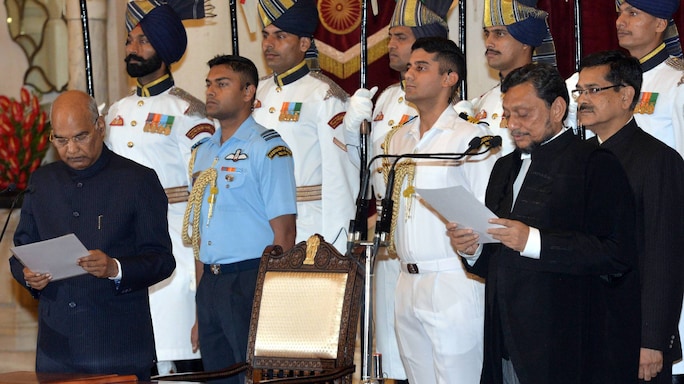 The President, Shri Ram Nath Kovind (left) administering the oath of office to Justice Sharad Arvind Bobde (right), as the Chief Justice of India, at a swearing-in ceremony, at Rashtrapati Bhavan in New Delhi on 18 November, 2019. (Photo credit: PIB)

President Ram Nath Kovind administered the oath of office of CJI to Justice Bobde at 9.30 a. m. today. Following the former Chief Justice Ranjan Gogoi’s retirement on 17 November, 2019, Justice Bobde had been recommended by his predecessor and will hold the post until he retires on 23 April, 2021. Hailing from a family of lawyers from Nagpur, Maharashtra, this dog-lover and photography-enthusiast is the son of eminent senior advocate, Arvind Shriniwas Bobde. Chief Justice Bobde, who is currently functioning as the Chancellor of Maharashtra National Law University, Nagpur, has been involved in some of India’s landmark judgements including the recent Ayodhya verdict, Aadhaar, Right to Privacy and Right to Life. Here’s a quick look at the top five judgments he was involved in.

1. The Ram Janmabhoomi-Babri Masjid Case or the ‘Ayodhya Verdict’

CJI Bobde was on the five-judge constitution Bench that rendered a unanimous verdict on 9 November, 2019, thus bringing the curtains down on the prolonged, politically sensitive and divisive legal battle. The subject of innumerable acrimonious debates and speculation, this case, which is also India’s most controversial land dispute, had been pending in the courts since 1950. The ex-CJI Gogoi-led Bench pronounced the previous decision vacated and ruled that the land belonged to the government, per tax records. It ordered for the land to be handed over to a trust to build a Hindu temple and the Sunni Waqf Board to be allotted an alternate five-acre tract of land to build a mosque.

In October 2019, a two-judge Bench headed by Justice Bobde directed the Committee of Administrators (CoA) headed by former Comptroller and Auditor General (CAG) Vinod Rai to demit the Board of Control for Cricket in India (BCCI) administration office in order for the charge to be taken by elected members to run the affairs of the cricket board. The cricket board is now being headed by the unanimously elected former Indian men’s cricket team captain, Sourav Ganguly, who has promised a corruption-free tenure, saying that “he will run the world's richest cricket body the same way he led the Indian team.”

CJI Bobde headed a three-member in-house committee that gave a clean chit to former CJI Gogoi citing that it found “no substance in the allegations of sexual harassment made by ex-employee of the Supreme Court against the CJI Ranjan Gogoi.” The committee also included two women judges—Justices Indira Banerjee and Indu Malhotra. On 19 April 2019, the woman, an ex-Supreme Court staffer, alleged that two instances of misconduct took place in October 2018, when Justice Gogoi was sworn in as the CJI. The controversial verdict came days after the complainant withdrew from the inquiry on 30 April after questioning its fairness.

In the Justice Puttaswamy (Retd.) and Anr. v Union of India and Ors.case, CJI Bobde was a member of the nine-judge bench of the apex court headed by the then-CJI J. S. Khehar which ruled unanimously in August 2017 that the Right to Privacy was a constitutionally protected fundamental right in India under Articles 14, 19 and 21 of the Constitution of India. The verdict ruled that “Right to Privacy is an intrinsic part of Right to Life and Personal Liberty under Article 21 and entire Part III of the Constitution.” The judgment was interpreted as paving the way for the eventual decriminalization of homosexuality in India.

Justice Bobde was also part of the three-judge bench which ratified an earlier order of the Supreme Court and clarified that no citizen of India without an Aadhaar card can be denied basic services and government services in 2015.