Together with the children in my medical campus, I too rediscover the Hospital Kid buried deep inside me 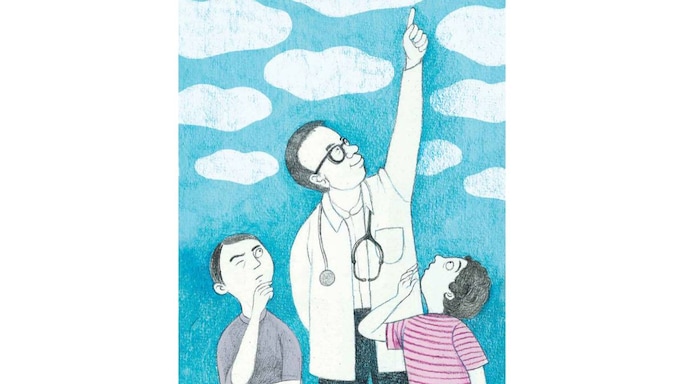 Sweety carries a tote with their belongings to see them through an entire shift and walks ahead, while Chhotu, drags a toy truck tied to a string and follows his mother dreamily. Sweety walks and Chhotu, lost in his own world of toy automobiles, sometimes entangled in the web of strings he pulls them with, follows his mother with tiny steps. Not even once does Sweety need to turn around to see if Chhotu is following her. Only an occasional prompt, urging him to walk faster, suffices: “Chhotu, Mummy has to hurry, no?” And Chhotu gets the hint and immediately steps up.

“Boom boom,” Chhotu looks at the staffer, and smiles the sweet smile of a little child, and lisps on the word ‘vroom’. There are many people at the hospital to look after Chhotu, while his mother is busy helping deliver babies or engaged in filling up registers or distributing meal coupons. There are other nurses and female sanitation staff and ward attendants who play with Chhotu to keep him engaged. Our pharmacists and dressers—young boys, all—use technology to keep Chhotu occupied, showing him videos on YouTube or simply letting him play with their phones. Sweety is a fan of Hindi serials on the Hotstar app and Chhotu is quite phone-savvy too. He can dial numbers on the phone and even take selfies! Bhutla—a term of endearment for someone cute and plump—is what Sweety’s co-workers call Chhotu.

One night shift, during the summer, it was somewhat breezy and cool in the patio—between the labour room and the emergency room—and we all sat there. It must have been around 11 p.m. and Sweety was busy in the labour room. So Mahadev, a young pharmacist looking after Chhotu, helped him search animation videos on his mother’s phone. When Sweety finished, she came and relieved Mahadev of his babysitting duty. Mahadev and I entered the emergency room when he received a call on his phone.

Mahadev too was surprised, but then he looked at the number on his screen, laughed, and showed me the caller ID: It was Sweety’s number! We both came out in the patio again and Mahadev showed his ringing phone to Sweety. Meanwhile, Chhotu was holding his mother’s phone, sitting on a different chair. Sweety took a look at Mahadev’s phone, laughed and protested, “See, I did not do it. He is calling you.” Chhotu had taken his mother’s phone and dialled Mahadev’s number!

We could not tell whether he wanted to call Mahadev to play with him once again or just wanted to speak to him, but we were all startled at the three-year-old’s ability to look for a number on the phone and dial it. And so lost was Chhotu in the call that he did not even notice that Mahadev was standing right in front of him holding his ringing phone!

If toy automobiles fascinated Chhotu, he’s equally eager to ride real ones. One of our drivers, Somu, who often takes Chhotu on rides around our campus on his motorcycle goes, “Boom boom! Bhutla, boom boom!” calling the little one. “Boom boom!” he answers, even if he is sitting on his mother’s lap inside the nurses’ resting room next to the labour room and goes running to Somu. And then both of them go on a motorcycle ride through the campus.

Not that Chhotu’s only obsessions are phones and automobiles. His mother makes sure he also learns from books and art. Sweety brings Chhotu’s alphabet books, notebooks and crayons to the hospital, makes him sit and practise alphabets and numbers or just scribble, whatever he feels like, with the crayons. I found Sweety’s method of teaching Chhotu the letters of the English alphabet quite funny. Sweety hails from Bihar and this was how she taught Chhotu:

A for apple. Apple maane seb.

B for ball. Ball maane gend.

Of all the things that I admire about Sweety, I am most impressed by how well she has trained both her children—Chhotu and her 10-year-old daughter Mini—to eat whatever food they are served. I remember myself as a three-year-old: finicky as hell. And spicy food? Goodness, no! There was a time when I did not eat even the masala tastemaker with Maggi noodles as it was too hot for me. When I contrast this with Chhotu’s attitude towards food, I feel really embarrassed about myself.

On one night shift, I hadn’t been able to cook food for myself, so when I knew Sweety was on the same shift, I requested her to bring some food for me. Sweety had cooked chicken that day, and brought me chicken and rice. The chicken was delicious—spicy with a rich gravy, just the way chicken curry should be made. In fact, it was so spicy that my nose was running, and for a few minutes, I was all sweaty. After dinner, I went to the nurses’ resting room to return Sweety’s tiffin box and compliment her on the food. What I saw shocked me. Sweety was feeding Chhotu the same rice and chicken, and Chhotu was not only eating that spicy food, he was also scooping up the gravy with his little fingers and licking it!

“He eats spicy food?” was all I could ask Sweety feebly.

“Yes, sir,” Sweety smiled. “He eats everything. Both my children eat everything I give them.”

“But what if he finds it too spicy?”

“He will ask for water. Or he will just pick up his glass and drink by himself.”

Standing there, holding Sweety’s tiffin box in my hand, I felt like running back in time and apologizing to my family for being a difficult child when I was three. Now whenever I see Chhotu stuffing himself with jhalmuri—a proper, made-for-adults jhalmuri—with chillies, onion, mustard oil and spicy masala, I feel stabbed by guilt.

I prefer to see Chhotu as one of the ‘Hospital Kids’, a term I have coined for children growing up or spending a better part of their day inside a hospital campus where their parents work. In our hospital, there are other Hospital Kids too. There is Abhi, the son of another ANM, and there is Khush, the son of our accounts manager. Abhi and Khush, about five years old, are best friends. They are seen cycling, playing cricket and exploring their world together. Abhi and Khush remind me of my own childhood, you know. I too was a Hospital Kid, having grown up in the hospital campus where my mother was a doctor. Like Abhi and Khush, I too used to hang around and play with other Hospital Kids.

And, somehow, children inevitably find their way towards a garbage vat. As a Hospital Kid, I used to find it fun to push around trolleys and wheelchairs in the hospital corridor and poke garbage with a stick even as my mother’s co-workers tried to prevent me from doing so. Abhi and Khush, now, go full steam towards our garbage dump even as we try to stop them. But children must do what they are asked not to do. The last time Abhi and Khush were poking around the cramped spaces of our office while Khush’s mother was busy, I decided to take over. I took them out of the office to show them “din mein taare”—stars during the daytime.

“But how can you see din mein taare?” they asked.

“Of course, you can,” I explained. “You need to stand at one particular point without moving even an inch, and look hard.” They were sold on my idea. I made them stand at ‘one particular point’, and asked them to focus on a faraway point in the blue sky and “stare with all their energy”. Then I escaped.

About five to seven minutes later, the boys rushed to me all hassled, but still eager. “We could not see din mein taare. Show them to us again!” Abhi pleaded with me. Our accounts manager guffawed openly and I too found it difficult—looking at the curiosity on the boys’ faces—to control my laughter. And so, with the Hospital Kids breathing new life into my mundane workday, I often rediscover the Hospital Kid in me.

*The characters in this story are all real. Their names have been changed on request.

Hansda Sowvendra Shekhar lives in Jharkhand. His latest novel, My Father’s Garden, was shortlisted for the 2019 JCB Prize for Literature.