He grabs the prized seat at last—but what happens next? 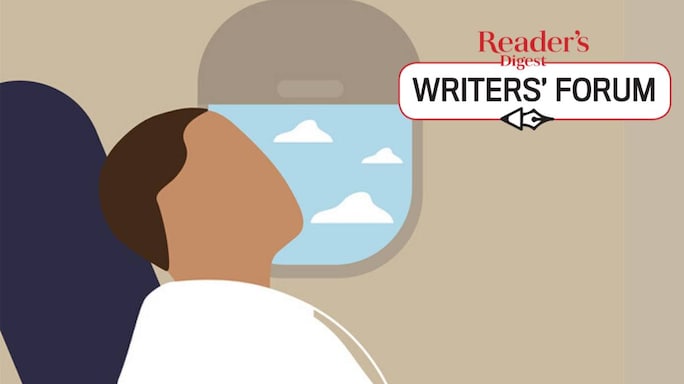 I have travelled by air several times, usually home and back from the city where I work as a middle-level manager—not for the sheer thrill of flight, but often for a pressing need to see my family.

But, each time I flew, I had this hankering to get a window seat, and to my deep disappointment, every time it turned out that I did not get the elusive seat.

So last summer when I planned my trip home, I swore to myself I would grab a window seat by checking in early and blocking one among the few free ones. I booked my tickets for a Thursday 5:30 a.m. flight so it was less crowded—and I had a better chance.

On the D-day, the alarm woke me up at three in the morning; I had slept only for three hours and was still drained thanks to a hectic day at the office earlier. I shook myself awake, and reached the airport, well ahead of schedule because, you see, I had work to do. I stood impatiently at the check-in counter as the first man to receive a boarding pass. “Excuse me, sir, can I see your ticket?” said the airline staff, and even before they could finish, I interjected, “Can I get a window seat?”

As the passengers trickled into the plane, there I was—sitting smugly in my hard-earned window seat. I was thrilled: If you want something badly, you can make it happen with the right kind of planning. I could hear the safety demonstration process in progress, but I was distracted—it must have been the exhaustion and excitement.

Then twilight slowly turned into full dawn, and the view of the tarmac from the plane was stunning. As the flight took off, I plugged in my iPod and turned resolutely towards my window—the view outside was overwhelming. During all my previous trips, I always had to peek over the shoulders of a fellow passenger to get a glimpse of this expansive view, which had always left me wanting.

As the aircraft steadied into full flight, most of the passengers including me, started to doze off. But soon, our slumber was broken by a crying child. Oh, no. I opened my eyes to see the harassed woman seated next to me who I guessed was the mother trying to pacify her bawling child.

After a bit of hesitation, I got up from my seat and offered that she could try shifting her child to my seat. I believed that my magical window seat could help.

She looked harrowed, but thanked me and asked me not to worry. But I was already up on my feet, which lent credence to my offer and so she took me up on it immediately. Quickly holding the boy's hand, she shifted him on to my seat. The effect was instantaneous.

The crying slowly faded away in the humming of the propeller engines and all of us, including the mother, let out a sigh of relief.

Separated from my window seat, I now developed mixed feelings. Did I overreact? Was I overzealous? Maybe, just maybe, I did not need to give up my prized seat—after all, no one had asked me to. Or, did I just want others to see me as a knight in shining armour? But as I sat trying to make peace with letting my seat go, it dawned upon me that I had no longer craved the window seat. Slowly I felt it was okay, and truth be told, I started feeling quite good about myself.

A few minutes passed, I tried once again to get some shut-eye, but I couldn't. I started stealing glances at my co-passengers, wondering what was running through their heads. Maybe the one in a business suit was anxious about bagging a new contract, which could swing his fortunes. Could the young fellow seated across the aisle, be worried about an unfinished project, which affected his promotion? What about the girl seated a few rows ahead—was she excited about her new-found relationship? Or was I just stereotyping them all?

As I sat wondering about my co-passengers and their inner lives, the irony of human life dawned on me. People put in hard work and drive all their efforts towards winning life’s window seat and to find happiness in that elusive little seat. For some, that window seat meant elevated status, to others it was material comfort—and for some, it could be the way to find love. But, by the time most of us won our battle to earn, protect and secure our window seats, there was very little time left to enjoy the view outside.

As these thoughts swam around in my head, my reverie was broken by the pilot’s announcement that it was time to land. As the passengers started shuffling out, and I picked up my cabin luggage to disembark, I was hit by something. Perhaps life is not even about getting a window seat or enjoying the view at all—it is about where you are headed. And if you are sure of it, the happiness or troubles of your journey cease to matter. The very thought of the destination can bring you pure joy.

The author is an architect based in Bengaluru, where he lives with his wife and two daughters. In his spare time, he can be found indulging in music, writing and graphic designing.

Do You Like This Story?
37
0
Other Stories
Please enter valid text
Must Reads
Latest Issue