The Secret Lives Of Letters

They may be small characters, but there are amazing stories behind all 26 alphabet all-stars A: The capital A hasn’t always looked the way it does now. In ancient Semitic languages, the letter was upside down, which created a symbol that resembled a steer with horns.

B: Grab paper and pen and start writing down every number as a word. Do you notice one missing letter? If you kept going, you wouldn’t use a single letter b until you reached one billion.

C: Benjamin Franklin wanted to banish c from the alphabet—along with j, q, w, x and y—and replace them with six letters he’d invented himself. He claimed that he could simplify the En­glish language.

D: Contrary to popular belief, the D in D-day does not stand for ‘doom’ or ‘death’—it stands for ‘day’. The US military marks important operations and invasions with a D as a placeholder. (So the invasion of Normandy on 6 June 1944 was D-1.)

E: Meet the ‘Smith’ of the English alphabet—e is used more often than any other letter. It appears in 11 per cent of all words, according to an analysis of over 2,40,000 entries in the Concise Oxford English Dictionary.

F: Anyone educated in today’s school system knows that the lowest grade you can get is an F. The low-water mark, however, used to be represented by the letter E. When Mount Holyoke College administrators re­designed the grading system in 1898, professors worried that students would think the grade meant ‘excellent’. F more obviously stands for ‘fail’.

G: Both g and c were originally represented by the Phoenician symbol gimel, which meant camel. It was the Romans who finally separated the two  letters, letting c keep its shape and adding a bar for the letter g.

H: The Brits have long had an h hang-up, according to Michael Rosen, author of Alphabetical: How Every Le-tter Tells a Story. They pronounce h two ways: ‘aitch’ and ‘haitch’. Accents that dropped the h from words were once considered ‘lower class’, Rosen writes. And in Northern Ireland, pronunciation distinguished Catholics (‘haitch’) from Protestants (‘aitch’).

I: Funnily enough, the dot over the letters i and j has a funny-sounding name: It’s called a tittle.

J: This is one of the two letters that do not appear on the periodic table. (Q is the other.) Invented in the 1500s by an Italian, j was also one of the last letters to be added to the alphabet.

K: With the possible exception of l (see below), k is the most notorious letter in sports. It’s how baseball fans record a strikeout. (When the first box score was written back in 1859, s was used to indicate a sacrifice; k was plucked from the end of ‘struck’.)

L: The National Football League has traditionally used Roman ­numerals to denote the number of the Big Game, but for the 50th Super Bowl, they decided to go with just the number 50. Why? Sports fans use the letters w and l as shorthand for ‘win’ and ‘loss’. Because the Roman numeral for 50 is L, the NFL worried that Super Bowl L would be, in PR terms, a big loser.

M: You can’t say the letter m without your lips touching. Go ahead and try it! 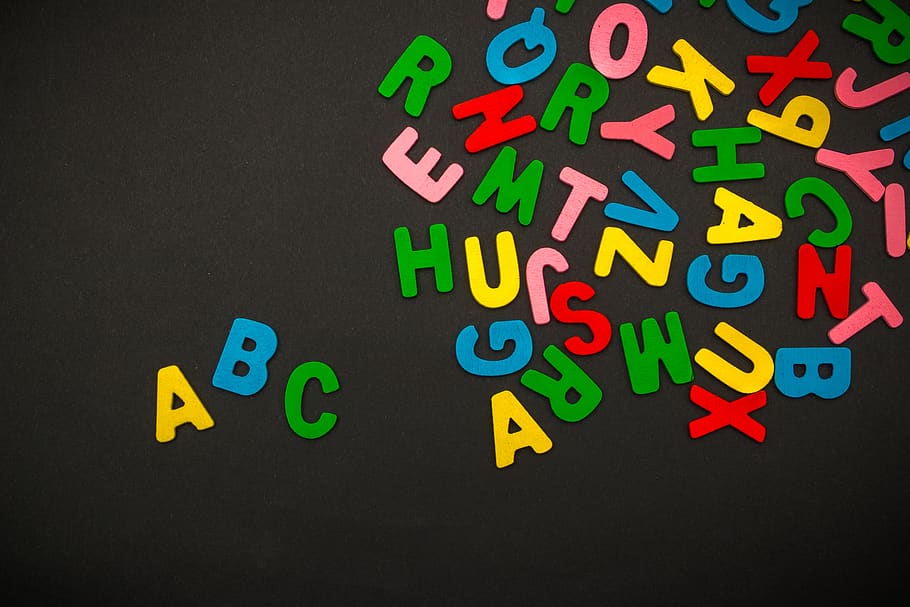 What are the secrets that the letters of the English alphabet have? (Picture: wallpaperflare.com)

N: The letter n was originally associated with water—the Phoenician word for n was ‘nun’, which later became the Aramaic word for ‘fish’. In fact, the capital N got its shape because it was a pictorial representation of a crashing wave.

O: Only four letters (a, e, l, o) are doubled at the beginning of a word (aardvark, eel, llama, ooze, etc.), and more words start with double o in English than with any other pair.

P: This may be the most versatile letter in English. It’s the only consonant that needs no help in forming a word sandwich with any vowel: pap, pep, pip, pop, pup.

Q: One out of every 510 letters in English words is a q, making it the least common letter in the English alphabet, according to a Concise Oxford English Dictionary analysis.

R: Sometimes referred to as the littera canina, or the ‘canine letter’, because Latin speakers trilling it sound like a growling dog, r gets a shout-out from William Shakespeare in ­Romeo and Juliet when Juliet’s nurse calls the letter “the dog’s name” in act 2, scene 4.

S: The English alphabet briefly included a letter called a ‘long s’. Used from the late Renaissance to the early 1800s, it resembled the letter f but was pronounced as an s. You’ll see it in various manuscripts written by the [American] Founding Fathers, including the Bill of Rights.

T: The term ‘T-shirt’ refers to the T shape of the garment’s body and sleeves. F. Scott Fitzgerald is believed to be the first to use the term in popular culture, in 1920, when the main character in his novel This Side of Paradise brings a T-shirt with him to boarding school.

U: Before the 1500s, u and v were used interchangeably as a vowel or a consonant. A French educational reformer helped change that in 1557 when he started using u exclusively as a vowel and v as the consonant.

V: This is the only letter in the En­glish language that is never silent. Even usually conspicuous letters such as j and z are silent in words we have borrowed from foreign languages, such as marijuana (originally  a Spanish word) and laissez-­faire (French).

W: Ever wonder why we call it a double-u instead of double-v? The Latin alphabet did not have a letter to represent the w sound in Old En­glish, so seventh-­century scribes just wrote it as uu. The double-u symbol eventually meshed together to form the letter w.

X: From ‘X marks the spot’ to ‘solve for x’, this is the go-to letter to represent something unknown. The idea is believed to have come from mathematician René Descartes, who used the last three letters of the alphabet to represent unknown quantities in his book The Geometry. He chose a, b and c to stand for known quantities.

Y: The switch-hitter in the alphabet, y functions as both a vowel and a consonant. The Oxford English Dictionary actually calls it a semivowel because while the letter stops your breath in words such as yell and young—making it a consonant—it also creates an open vocal sound in words such as myth or hymn.

Z: Believe it or not, the letter z has not always been the last letter of the alphabet. For a time, the Greeks had zeta in a respectable place at number seven.