Indian diplomat and politician, Vijaya Lakshmi Pandit on the lessons learnt from the Father of the Nation 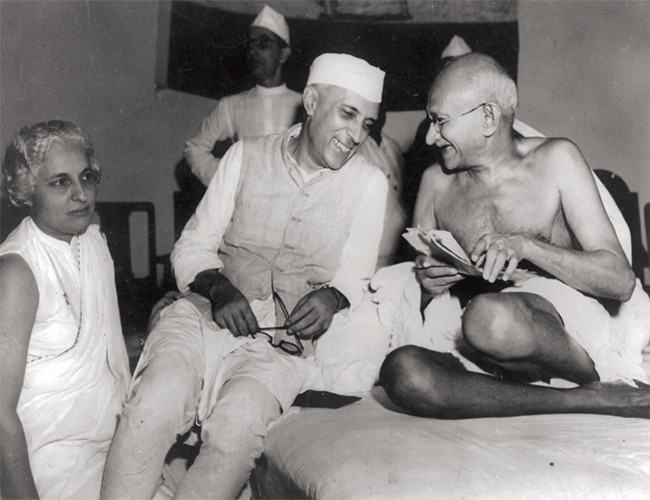 The best advice I ever had came from one of the greatest souls the world has ever known -- Mahatma Gandhi -- on a sunny afternoon a decade ago.

Most people pass through a period of anguish when their belief in humanity is at a low ebb. I was in such a period. My husband had recently died. My deep sorrow over his loss was followed by the humiliating realization that in the eyes of Indian law I had no individual existence. Along with other Indian women I had participated for years with men in the national struggle for freedom, working and suffering side by side with them until it had finally been achieved-yet in law we women were still recognized only through our relationship to men. Now as a widow without a son, I was not entitled to any share of the family property, nor were my two daughters. I resented this galling position. I was bitter towards those members of my family who supported this antiquated law.

At this time I went to pay my respect to Gandhiji and say goodbye before leaving for America to take part in a conference. After our talk he asked, "Have you made your peace with your relatives?"

I was amazed that he would takes sides against me. "I have not quarrelled with anyone," I replied, "but I refuse to have anything to do with those who take advantage of an outworn law to create a difficult and humiliating situation for me."

Gandhiji looked out of the window for a moment. Then he turned to me and smiled, and said, "You will go and say goodbye because courtesy and decency demand this. In India, we still attach importance to these things."

"No," I declared, "not even to please you will I go to those who wish to harm me."

"No one can harm you except yourself," he said, still smiling. "I see enough bitterness in your heart to cause you injury unless you check it."

I remained silent, and he continued: "You are going to a new country because you are unhappy and want to escape. Can you escape from yourself? Will you find happiness outside when there is bitterness in your heart? Think it over. Be a little humble. You have lost a loved one-that is sorrow enough. Must you inflict further injury on yourself because you lack courage to cleanse your own heart?"

His words would not leave me. They gave me no peace. After some days of severe struggle with myself, I finally telephoned my brother-in-law. I would like to see him and the family, I said, before leaving.

I hadn't been with them five minutes before I sensed that my visit had brought a feeling of relief to everyone. I told them of my plans and asked for their good wishes before starting on this new stage of my life. The effect on me was miraculous. I felt as if a great burden had been lifted and I was free to be myself.

This small gesture was the beginning of a significant change in me. A year and a half later I was in New York, leader of the Indian delegation to the United Nations. Important to us was India's complaint regarding the treatment of people of Indian origin in the Union of South Africa. Harsh things were said by both sides. I resented the manner in which my opponents made personal attacks harmful to India's prestige and to mine. I struck back with the same sharp weapons. Then, after a distressing duel of words, I suddenly thought of Gandhiji. Would he approve? To him, means were as important as the end -- in the long run, perhaps more important. What if we succeeded in getting our resolution passed by questionable tactics that injured our self-respect?

Before going to bed that night I resolved that, come what may, no word of mine would be lightly used in the UN. From then on, I lifted the debate back to where it belonged, refusing to retaliate to personal attacks or to score a cheap point. Our opponents met us on the new level and from then on we argued the case on its merits.

Before leaving the committee room on the last day, I went up and spoke to the leader of the opposing delegation. "I have come to ask you to forgive me if I have hurt you by any word or action in this debate."

He shook my hand warmly and said, "I have no complaint."

His words have helped me retain perspective even in small matters. Many women, I imagine, share with me a recurring nightmare: Someone important to you is coming to dine; the guests have arrived, it is time to eat-but there is no dinner. You wake, perspiring, relieved to find it is only a dream.

But recently it really happened to me. My guests of honour, the prime minister of Great Britain [Anthony Eden] and Lady Eden, could hardly have been more important to me, high commissioner for India in the United Kingdom. I had planned everything meticulously, from the menu to the colour scheme of the flowers and the candles. When the guests had arrived and drinks had been passed twice, I signalled the butler to announce dinner. But still we waited. When for the third time drinks came round I excused myself and ran downstairs to the kitchen.

It presented a shocking sight. In one corner stood a frightened little kitchen maid, in another the housekeeper. At the table sat my cook, waving a ladle and singing, beating time with his foot. His eyes were glazed and he was far away in some other sphere. The table was littered with pieces of chicken.

My knees felt too weak to support me, but I asked in as normal a voice as I could command: "Why isn't the dinner ready?''

I was furious. It was on the tip of my tongue to say, "Get out. You're dismissed!" when I thought of the counsel that had calmed me so many times. If I lost control, I would only hurt myself.

I pulled myself together. "Let's get something on the table," I said.

Everyone pitched in. The food served wasn't quite what the menu described, but when I told my guests what had happened there was a chorus of surprise. "If this is what your cook gives you when he's drunk," someone exclaimed, "What must he provide sober!" The relief in my laughter must have sounded a little hysterical. My perspective restored, I realized that a dinner party, however important, is not in the pivot of existence.

To retain a sense of proportion is as important as being able to keep one's heart free from hatred. For all of us, no matter what our work, the advice Gandhiji gave me is meaningful: "No one can harm you but yourself."

Vijaya Lakshmi Pandit wrote this article in 1955 when she was the Indian High Commissioner to the United Kingdom. She passed away in 1990. This story first appeared in January 1956.