Tell Me A Story: Rediscovering The Lost Art Of Oral Narrations 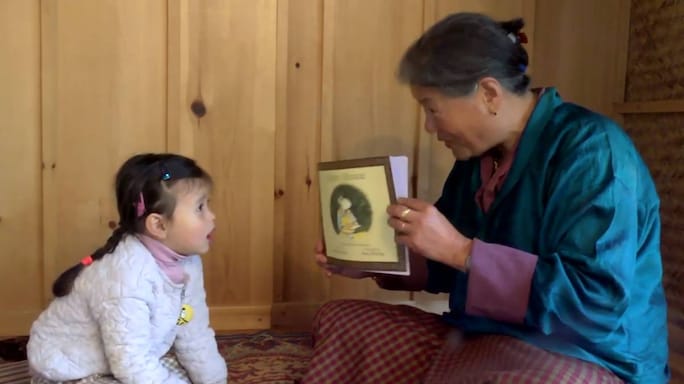 The storybook Membar Tsho: The Flaming Lake begins in the warm glow of a wood-stove kitchen, where a portly grandmother whips up a story from the beautiful Bhutanese Valley of Tang. “This story was told to me by my grandparents, who had heard it from their grandparents. And now I will tell it to you …” she says, as she takes her grandchildren on a delightful adventure, away from the bustling city of Thimphu, into the pine-forests of Bumthang. Dotted with butter lamps, prayer flags and mystical treasures, the illustrated book immerses you in the ancient traditional art of oral storytelling.

Kunzang Choden, author of the book, mirrors this scene in a video where she narrates the story of Pema Lingpa, to her three-year old granddaughter, CZ. She listens in rapt attention as the legendary figure leaps into the Membartsho Lake, crosses into another realm to reach a mysterious temple and miraculously retrieves a statue of the Buddha and a sealed skull.

The video is part of a series titled Tell Me a Story, the brainchild of Choden—one of Bhutan’s most eminent writers, the first Bhutanese woman to write a novel in English and former co-director of the erstwhile Bhutan Mountain Echoes Literary Festival—and her film-maker daughter, Dechen Roder. Streamed on social media under the production banner of Dragon Kidz, the series was created for young children stuck at home during the COVID-19 lockdown in Bhutan. These six- to seven-minute-long videos are released on a weekly basis. So far four of Choden’s five folktales have been produced.

Tell Me a Story was first conceived by Roder as a way to engage her toddler when the day-care centres in Bhutan closed during the lockdown. While visiting her hometown, Bumthang, Roder struck on the idea of making these short videos of her mother and daughter for other children similarly cooped up at home. Although her folktales have been written in English, the videos have Choden live translating them into Dzongkha to reach a wider audience.

Oral storytelling traditions are an intrinsic part of Bhutanese culture, and are quintessential to passing them down to posterity. Choden, who grew up in the ’50s, alludes to her own childhood when, in the absence of books she would, “listen to stories told by the older members of (her) family and village elders.”

According to her, Bhutan’s transition from an oral society to a visual one was rapid. “There was a real danger that oral traditions would be lost and that is why I decided to document the stories I had heard. I felt (these) stories informed identity and culture, and were like guides to character, society, (and) history.” However, documenting the folktales was not enough for Choden. “In writing them down, I somehow felt that the essential character of the story was lost. It is only in the oral rendition of the tale that much of the storyteller’s own imagination and understanding embellishes and enriches it.” The videos, she finds, are a more authentic way in which to preserve these voices.

The lockdown has been an ideal time for these videos. As Bhutan’s favourite children’s author takes the screen with her books, there has been an outpouring of excitement and nostalgia. An overwhelmed Roder adds, “I had not even thought of the larger context of a generation of writers who were inspired by my mother’s writing.” Many of these books are not even easily available anymore. Roder is, therefore, keen to release the videos on the WeChat platform as well, because of its wider reach into remote parts of the country. She also intends to include stories by other well-known Bhutanese authors after finishing the ones by her mother.

For Choden, Tell Me a Story is more than just a new project—it is special because with it she returns to the roots of storytelling in Bumthang, the very place where she first heard these stories. “I told my daughter stories, and she became a filmmaker—a storyteller in a way—and now, together, we pass on these stories to others, marrying modern technology and traditional oral storytelling. It has all come full circle,” she says.