Telepathy with My Dog?

How a puppy became a partner-in-pandemic 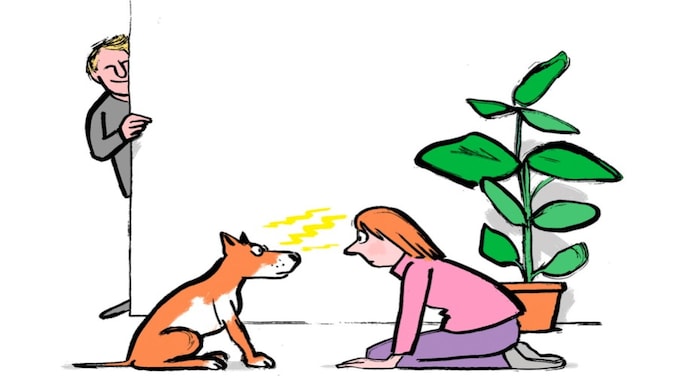 I can count a dozen friends, all in their 50s, who inexplicably reacted to the global pandemic by adopting a puppy. Actually, I did, too. Last year, paralyzed in the house, afraid to leave without donning a hazmat suit, I was suddenly consumed by the urgent desire to acquire a seven-week-old Australian shepherd. This craving will no doubt be the subject of a future study on irrational pandemic behaviour. For one thing, this breed is one of the most energetic on the planet, whereas I am bookish, lazy, and middle-aged. And I had taken this route before—with mixed results.

My trouble with dogs is that I never have the remotest clue what they want, and they never seem to have the slightest inkling of what I’m saying to them. This domestic impasse became legendary in my family when we had a dog named Kevin. He was a cross between a border collie and a basenji, which means that half of him descended from the smartest breed and the other half from, easily, one of the stupidest. He was highly alert, yet unable to grasp a single thing. Kevin’s entire communicative repertoire—whether he wanted food, exercise, permission to jump on the sofa, a toy, or, who knows, a conversation about the electric bill—consisted of padding up to me and staring. He did this about 50 times a day, just staring brightly without moving a muscle, and after years of living together, I still didn’t know what he wanted. We coexisted in a state of profound mutual incomprehension.

“Sometimes I think,” I wrote in my journal, “it doesn’t matter that I don’t know what he wants, because we have nothing in common. Whatever he wants will be something I don’t want. He probably wants me to go outside and chase squirrels. I don’t want to.

”My husband would let Kevin stare at him until his eyeballs fell out and not worry about it. He took Kevin for walks, fed him, and let him sleep on the bed. Done. But as a mother, I was wired to worry about how everyone was feeling.

So, one evening I left Kevin at home and, with about 20 other confused pet owners, attended a workshop led by a pet telepathist whom I hoped would explain the trick to reading Kevin’s mind. She was a former bureaucrat who apparently had the revelation that she wasn’t meant to file tax reports because she knew what pets were thinking. She arrived for the class carrying a slim grey cat, whom she introduced as her assistant. The cat soon shot into a closet, where he remained for the next two hours“Moose is going to be invisible for a while, but that will help you get used to communicating with pets at a distance,” our instructor assured us, beaming. We nodded, awaiting a message from Moose, such as“Get me the hell out of here.” In the meantime, our teacher explained what she knew about animal communication.

“The thing that animals want most in their life is to be heard,” she said, sitting on a desk and swinging her legs, “especially the birds. They really have a lot to say because they travel around the world.” Um, what? “Don’t analyze; don’t edit,” she warned, about receiving messages. “Just be willing to say, ‘That was real.’”She had us divide into pairs. The woman beside me was to tune into Kevin, who was at home sniffing about, and I was to pick up her cat’s thoughts. We both looked horrified, which suggested our shared insecurity about this. But we’d paid our money. So I offered that her cat was … under the bed … and wanted to go out? She countered that Kevin was … lying in front of the fireplace… and also wanted to go out. We reported our findings to the class, feeling like a pair of Pinocchios. Back home, my husband suggested I contact the instructor for a personal consultation with Kevin. “Let them go mano a mano,” Ambrose urged.“Just her and him.” I couldn’t resist.

When I introduced the telepathist to her subject, he was conked out on our dining room floor making snuffling sounds. I asked her what he was thinking.

“He says that you, as a family, should lighten up,” she reported. Otherwise, she said, Kevin is happy with his role in life: to be a teacher to us, to help us connect with our energies, “and to receive messages from him.” This is just a vicious circle, I thought. What messages?

My husband interrupted: “Ask Kevin who killed our nephew’s gerbil—him or Biscuit?” (Biscuit was my sister’s psycho-frisky golden retriever, who couldn’t be in a room for two seconds without knocking something over. She drove my sister bananas.)

Undaunted, the telepathist asked the deeply asleep Kevin if he was responsible for a certain gerbil’s corpse appearing beneath my nephew’s bed the previous summer. Then she looked at me. “Kevin says it was sad, it happened very fast, but his back was turned at the time.” Upon hearing this, Ambrose had to go outside and bray with laughter.

Meanwhile, she offered to tune in to Biscuit, because maybe Kevin was evading responsibility. Moments later, she announced that yes, Biscuit had killed the gerbil, “and she’s not sorry.”

I thanked the pet telepathist and ran to call my sister at work.“BISCUIT DID IT—AND SHE’S NOT SORRY!” My sister laughed so hard she fell off her chair.

This became a widely shared tale in the family, so everyone is preparing to be amused by how I fare with our new pup. So far, the fact that I’ve been training Ellie while wearing a mask hardly improves the odds

Do You Like This Story?
6
3
Other Stories
Please enter valid text
Must Reads
Latest Issue