Sound Smarter With These Tips

Avoid these English-language mistakes – and get ahead 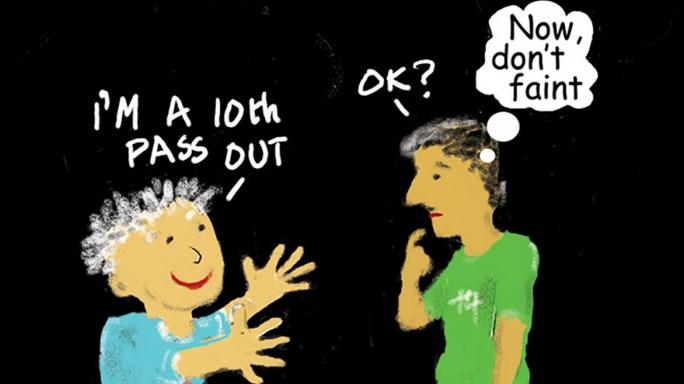 In these days of texting, Twitter and "1daful" brevity, would being grammatically correct and using English elegantly matter when you speak, e-mail or apply for a job? The other day, Reader's Digest got an application from a journalism student. It read: "I Megha Mathur* is pursuing Bachelor of Journalism … My institute has advised me to approach a well-established magazine and work their as an intern ..."

We felt sorry. I is? No commas or hyphen where needed. Work their as …? And who is this Bachelor she's pursuing? Not surprisingly, Megha's application didn't make it. So watch out for these common slips.**

Why: Even people with degrees get this wrong. It's not a plural. It's a degree that is possessed by an individual who earned it. The apostrophe indicates possession (Tommy's supper; Jack's pail). And there's just one person owning it, so don't write bachelors'. Don't write Bachelor's of Arts degree either. It's a Bachelor of Arts [Science, Engineering, etc] degree. As for our wannabe intern, she would have done better had she written: "I, Megha Mathur, am doing a Bachelor of Journalism degree ..."

Why: Way back means a long way back in time. Yet even some newspaper reports say things like "way back in 2013 ..." That would fit if we were insects that lived for just for a few weeks. There's no defined minimum number of years required for choosing this term, but "way back in the 1950s" or "way back when I was a boy" would sound quite right.

You mean: the late Mr Patel

Why: If you said "late Mr Patel" you could be implying that the dead man was unavoidably delayed and might walk in at any minute. This is probably the most common error found in our wedding cards. It's fine to say Mrs Patel's late husband (no the) but you must have the late before the name of the departed soul. Also the late … should ideally describe someone who died fairly recently-lately. Even so, it's all right to add, say, "grandson of the late Mr Arvind Patel" in a wedding card, even if Arvindji died way back in 1948.

You don't mean: my salary is very less

You always mean: my salary is very low

Why: "Less" is mostly used to compare one amount with another and is usually followed by than. Even so, this line "Investors' appetite for equity is very less..." actually appeared in a top business newspaper in June. Some idioms with less are not to be followed by than: less and less; no less; less is more. And be equally careful with lesser. Saying "lesser than" (instead of "less than") would be about as bad as saying "morer than." Lesser is best saved for phrases like lesser degree; lesser mortals; a lesser woman, lesser-known artist; the lesser of two evils. Lesser is also used to describe a species that is smaller than other similar types, as with "the lesser goldfinch."

You don't mean: I have taken many leaves

You only mean: I have been on leave many times

Why: Although certain human resources (HR) departments, too, have started wrongly using "leaves" in memos and interviews, you'd leave a sorry image if you said so. Leave, when it means "days when you are allowed to be away from work," is best left like that be it for one day or many. Otherwise you'd be plucking leaves off a tree.

You don't mean: we bought some furnitures

You always mean: we bought some furniture

Why: Furniture is both singular and plural just like sheep, equipment, aircraft, deer, fish (although fishes is right for different kinds of fish just like peoples is sometimes used to cover races or nationalities), offspring and several other such words. For more on this, google irregular English plurals.

You mean: I'm an IIT alumnus

Why: Alumnus, like several other words that came from Latin, can be confusing. Alumnus is the singular, and the word refers only to a former male student of a school or university. A lady would be an alumna, and the feminine plural used to be alumnae. But alumni is accepted collectively for both men and women. Watch out for other words from Latin like data and addenda (already plural, so don't say "datas" and "addendas").

You don't mean: With regards to your work ...

You mean: as regards your work ...

Why: Regards is used to convey good wishes, as in "Give our regards to Auntie" or when signing off a letter "with kind regards." But "as regards" means concerning something or somebody, much like "with regard to." Even so,  "with regards to your work" is getting increasingly acceptable, especially on account of its wide use in North America.

You don't mean: basis our discussion

You always mean: on the basis of our discussion

Why: Simply because it's in every other office memo there's no reason to accept it. Using it means you'll give the impression that you've learnt your English from semi-literate memos rather than from good books. Basis should have some basis in grammar. Use: "on the basis of your qualifications"; "on the basis that…"; "will form the basis for…"

You don't mean: he is a faculty

You always mean: he is a member of faculty / the faculty

Why: This used to be heard among students. But now those same students have evolved into journalists and editors, and a professor or lecturer is called "a faculty" in multiple news reports. Funny, considering that the first and most important meaning of faculties denotes physical or mental abilities. So if you are in full possession of your faculties, you can hear, speak, see, smell, understand, etc. But at a university, the faculty describes all the teachers there. Not a single faculty member!

Why: When you start a sentence with that phrase, it means you're seeking a transition, and are preparing your listeners to expect that you may contradict yourself, maybe in the interest of logic and accuracy. Having said that, why must you avoid it as far as possible? Because if you google out any list of the most irritating phrases in English, you will find it there!

You SAY: He's a 10th standard pass out

Why: This usage is more than "faintly" clumsy. Yet it's increasingly seen and heard everywhere. Avoid it. One reason, because it's only acceptable in a phrase like "passing-out parade." Otherwise, "pass out" means to fall unconscious.

You say: I went to USA

You must say: I went to the USA

Why: With the names of certain countries and provinces, you need the definite article (the). "If so, why not the India?" you could ask. It may seem a bit mad, but there's method in it. The United States of America describes a certain union of states. You'd use the if you spelled out our full name too: The Republic of India. The same rule holds for the United Kingdom, the Netherlands (means the low countries), or the Punjab (the five rivers).

Why: Every language has filler phrases, and to be honest would make your English sound quite natural. It's usually a way of starting to give your frank opinion, which might cause some mild surprise or offence. "To be honest" could sound like your normal behaviour is far from it. (Warning: Never say it to the authorities if you're the subject of an investigation.)

Why: Don't utter that irritant unless you're doing a thesis on relativity, or writing a line of poetry that rhymes with a word like grime. People who use "at this moment in time" instead of "now" are padding their speech to buy themselves time-they'd get about five times as many moments to think. But you'll sound far less annoying if you paused and resumed with "Now ..."

Why: After he wrote Hamlet, Shakespeare could have said, "According to me, brevity is the soul of wit." But you don't have to say that unless you, too, have an immortal quotation of your own. Or you'd only reflect the wit who wrote: "According to me is the only 'according to' that matters."