Reunited By Science: Bond of Brothers 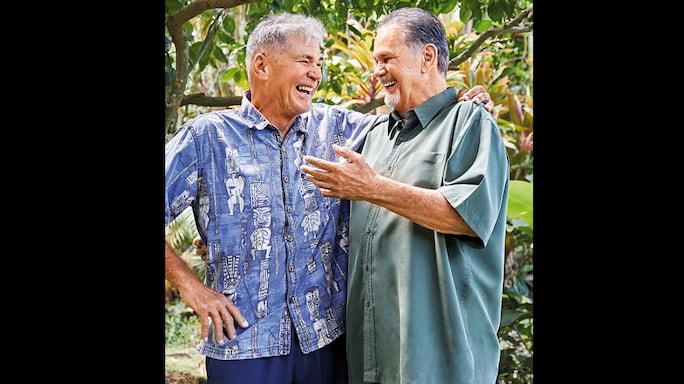 Walter Macfarlane, 76, and Alan Robinson, 74, have been friends for more than 60 years. They grew up a few miles away from each other in Honolulu, Hawaii, and met in sixth grade. They played high-school football together. They are so close, they’re Uncle Walter and Uncle Alan to each other’s kids. So imagine their surprise when they discovered they were in fact biological brothers.

“It did feel natural,” Walter says of the revelation. “We knew each other so well.”

It came about, as so often happens, by accident. Walter, a retired math and physical education teacher, knew that he had a complicated family tree. His mother had been young and unmarried when she gave birth to him during World War II, and because she couldn’t raise him on her own, the family pretended that his grandmother was his mother and his mother was his sister. Walter didn’t learn the truth until he graduated from high school. Even then, his mother never told him (or anyone else) who his father was.

So in 2016, when commercial DNA-testing kits were starting to take off, Walter’s daughter, Cindy Macfarlane-Flores, suggested he try a couple. When Cindy logged on to ancestry.com to check the results, she saw that a user named Robby737 and her dad shared enough DNA to be half siblings. When Cindy asked her parents whether they knew anyone who could have that username, her mother immediately thought of Walter’s friend, Uncle Alan. His nickname was Robby, and he used to fly 737s for Aloha Airlines.

Could that really be possible? Walter wondered. He spent 10 minutes trying to get his friend on the phone. When Alan finally answered, he confirmed to Walter that his username was Robby737.

“I’m trying to act cool,” Walter says. “But I’m so excited inside, I’m gonna burst out. I think I said, ‘Oh, I think we’re brothers,’ in just a casual manner.

“I was in denial,” Alan says. “We’ve known each other for so long, I thought he was just joking around.”

But Alan knew it was possible. He had been adopted as a baby by Norma and Lawrence Robinson. Several years before, Alan had taken the same DNA tests that Walter did to learn more about his ethnicity and medical background. But he’d never talked to Walter about it.

Soon after the phone call, the men compared their test results on 23andme.com and found that they shared several identical X chromosomes, meaning they had the same mother. “If I wasn’t in that database, this never would have happened,” Alan says. “It was meant to happen.”

However, one person apparently worked very hard to make sure that it never happened: their mother. Walter knew his mother’s name was Genevieve K. Paikuli, but Alan’s birth certificate lists his mother as Geraldine K. Parker. The identical initials in the name listed as Alan’s mother led the men to believe that Genevieve had used a pseudonym when she gave Alan up for adoption. Alan also believes that his adoptive parents, the Robinsons, knew Genevieve was his birth mother and didn’t tell him out of respect for her wishes.

Neither brother knows why no one ever told them they were related, but they attribute it to the era’s social norms and the turbulent times surrounding the attack on Pearl Harbor and the war, which was still being fought when both men were born.

“We don’t know what transpired, but [we have] no bad feelings,” Walter says. “At that time, you had your own reasons why you did what you did.”

But they have gained much more than they lost. Thanks to their DNA test results and research by Cindy, they learned who their fathers were—both were military men from the mainland who had been stationed in Hawaii. Those discoveries led to more: Walter found out that he has four more half-brothers and has since travelled to California to meet them in person; Alan has two half-sisters and a half-brother. “It’s mind-boggling,” Walter says.

Now that their family searches have come to a close, Walter and Alan just want to make up for lost time. They had fallen out of touch after high school, and although they eventually reconnected, they still didn’t see much of each other because they were busy raising their kids. “If we had known sooner we were brothers, we would have been contacting each other all the time,” Walter says. They are now. Both still live in Honolulu, about eight kilometres apart, just like when they were kids. They talk on the phone weekly and go to lunch regularly. They’re even planning to take a cruise together.

“Our mother lived to be 92,” Walter says. “We have a few more years, hopefully. We have good genes.”