Reunited By Science: A Royal Revelation 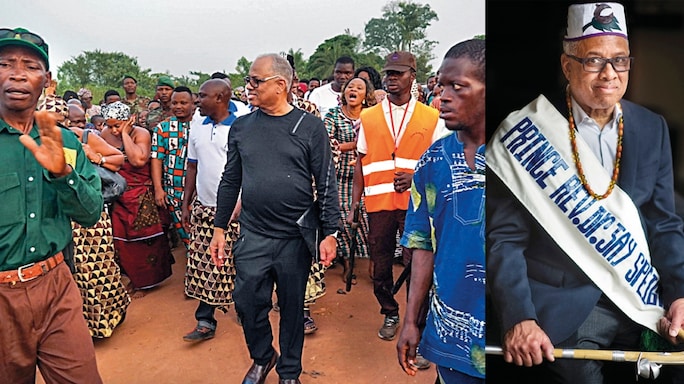 As a descendant of slaves, Jay Speights had struggled to find written documentation of his family history. He spent years looking, as his father had before him, but he was 64 before a DNA test offeredta solid lead. The pastor from Rockville, Maryland, learned that 30 per cent of his DNA was from Benin, a country located to the west of Nigeria, about which Jay knew next to nothing.

At the urging of a friend, he turned to a database called GED Match, which has had success connecting African Americans and their African relatives, to learn more about his link to Benin. After uploading his data to the site, Jay saw a surprising DNA match. The website listed a man named Houanlokonon Deka as his distant cousin. Next to the listing were the words ‘royal DNA’. Beninese royalty? Jay was stunned. He had no idea what to do next.

But fate—or maybe even divine ­intervention—kicked in a few months after Jay learned of his royal lineage. At the New Seminary in New York he met the leader of the West African religion Vodun, who had travelled from his home—in Benin. Jay told the man and his group his unusual story, and one of the Beninese men immediately replied, “I know your king. Here is his number.”

“I mean, how could that possibly happen?” Jay says. “After all these years of going through my father’s search, going through files ... it just fell in my lap. That’s the hand of God.”

The first time Jay called King Kpodegbe Toyi Djigla, the traditional ruler of the kingdom of Allada in southern Benin, the king hung up. The second time, the king handed the phone to his English-speaking wife, Queen Djehami Kpodegbe Kwin-Epo. She and Jay started messaging each other online. She told him he was a descendant of King Deka, who had ruled Allada centuries earlier. “We would be delighted to welcome you to your home, dear prince,” she wrote.

And so Jay went. On 6 January 2019, his late father’s birthday, he landed in Benin. Posters written in French, the country’s official language, greeted him: “Welcome to the kingdom of Allada, land of your ancestors.” At least 300 people were waiting for him outside the airport. They danced, sang and played instruments to celebrate the return of their long-lost prince.

Accompanied by a motorcade, the queen picked him up from the airport, introduced him to local dignitaries, and showed him some historical sites. When they arrived at the palace for an audience with the king, at least 1,000 people were waiting for them. Jay was overwhelmed with emotion. “I started looking at faces and features. I’m looking for the physical connection to our DNA. Just taking it in,” he says. “You’re kind of almost dazed because you find yourself in a situation that most African Americans really believe you can never step into, that can never happen, and that’s to find the part of your DNA that comes from Africa.

Once Jay composed himself and got out of the car, people cheered and chanted his name. He smiled and waved while walking through the crowd. When he and his interpreter reached the palace, he received a quick lesson in royal etiquette—what he should do when the king entered and how he should address Beninese royalty. In the throne room, the king welcomed Jay home, and they spoke about his trip through their interpreters. Later that night, Jay participated in a ritual that was to show whether his ancestors would accept him into the family. (Luckily, they did.)

How Jay’s royal ancestors came to America from Africa remains a mystery. Benin was once home to one of West Africa’s biggest slave ports. African royalty would sell war captives into slavery, and some would allow royal family members to travel with European merchants to the New World, where they would usually end up being enslaved. Jay’s Beninese relatives told him the royal family of Allada would not have sold their own people into slavery, but they couldn’t tell him how his ancestors had ended up on a slave ship. He is still grappling with being a descendant of slaves and people who led others into slavery, but that knowledge doesn’t keep him from embracing his Beninese heritage.

“I’ve stepped into my identity,” he says. “I can point to a place on the map and say, ‘The Speights family comes from here, right here.’ We’re a royal family. We have a history.”

In fact, Jay has continued to deepen his connection to his homeland. When they met, the king gave him ‘princely duties’: Once he got back to Maryland, he was to look for ways to bring clean water to the village surrounding the palace in Allada and to promote the kingdom in the United States. Now Jay is partnering with the Rotary Club of Alexandria West in Alexandria, Virginia, to raise money to build wells in the village.

He also searches for others who have DNA from Allada (primarily through GED Match) and introduces them to their ancestral home. After all, not everyone can be lucky enough to be handed the king’s phone number.