President Trump described the country as “very aggressive”. A writer familiar with it couldn’t disagree more 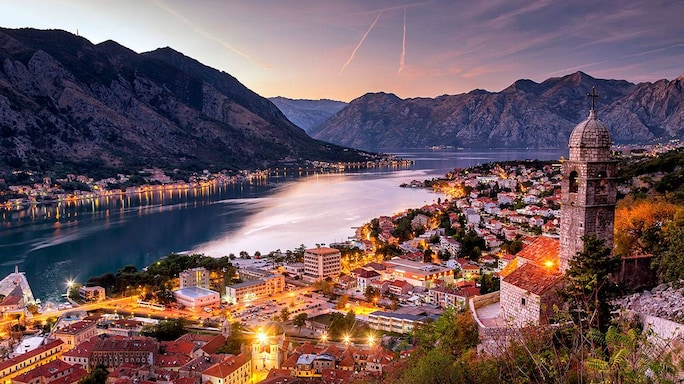 When planning a family trip to Montenegro last spring, I found myself telling perplexed friends, who knew next to nothing about the Balkan country: “Imagine yourself in Venice, sail down the Adriatic coast, look to your left and stop before you reach Albania.”

But since President Trump described the country, in a televised interview in July last year, as a possible trigger to World War III and Montenegrins as “very aggressive”, the questions have trended from ‘Where is it?’ to ‘What’s there?’

For starters, there is dramatic natural beauty, including the imposing mountains that wall the coast and inspired its name Monte Negro, or Black Mountain, in the 13th century. More invested in tourism—which accounts for over 20 per cent of the economy—than war, Montenegro attracted two million visitors last year, more than three times its population, according to the national tourism office. 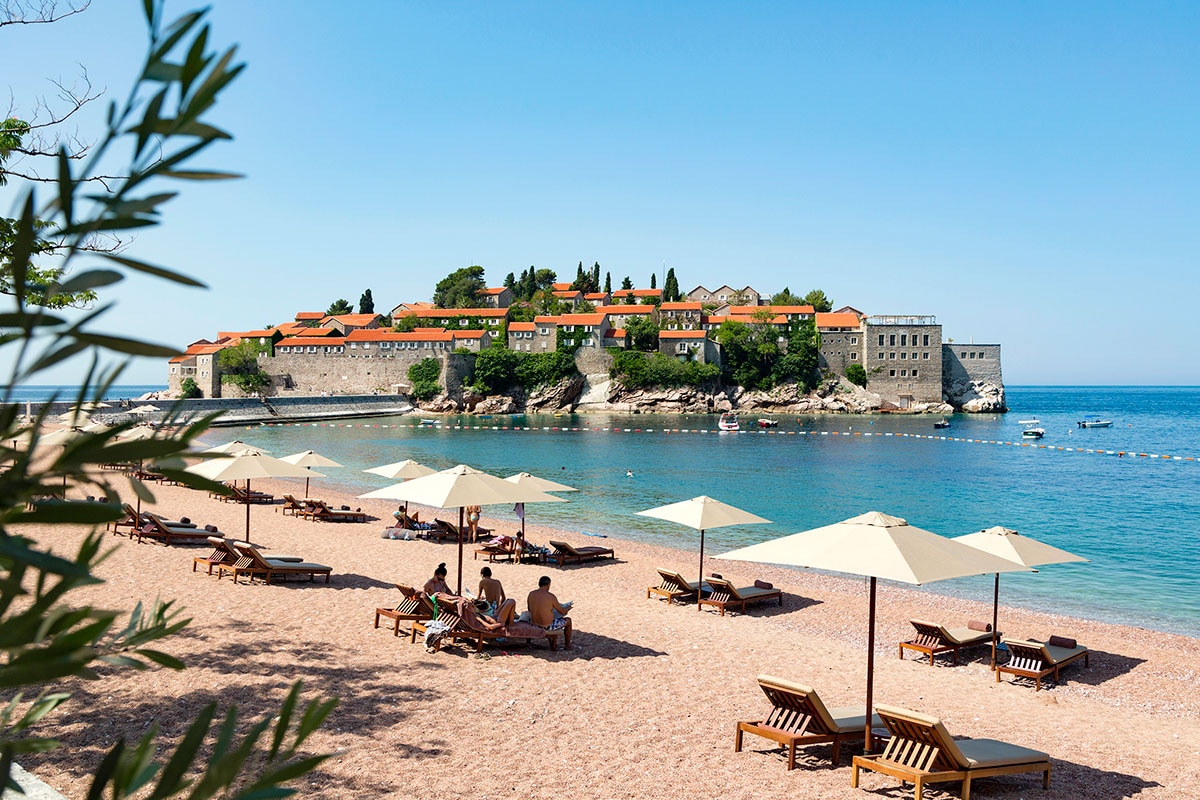 The beach at Sveti Stefan, a peninsular village-turned-luxury-resort

A statement from the government in reaction to Mr Trump’s characterization cited Montenegro’s “peaceful politics”, noting that during the Balkan Wars of the 1990s, the country was “the only state in which the war didn’t rage during disintegration of the former Yugoslavia”, of which it was a part.

As the granddaughter of immigrants from Montenegro and a repeat traveller in the region, my experience of Montenegrin aggression is limited to receiving large portions of food and admonishments to clean my plate.

President Trump wasn’t wrong about the country’s size though. NATO’s newest member, which declared independence from Serbia in 2006, is indeed small. Less than half the size of Belgium, it is diminutive, but it’s just right for a time-pinched vacation, which, in our case, was eight days in May.

“You cannot imagine how such a small country has everything: national parks, mountains, beaches, nightlife, history, Orthodox monasteries,” said Nina Batlak, a Dubrovnik-based product manager for Super Luxury Travel, which offers trips in Montenegro. “Everything fits in such small borders.”

Many travellers set out from Dubrovnik, the popular walled city on the southern Croatian coast, about an hour’s drive from the border. But we found that flying into the capital of Podgorica put us >within easy striking distance of a variety of attractions: the Dinaric Alps in the north, the Adriatic coast to the south and the cultural treasures of mid-Montenegro.

Most visitors come for the sea, a crowd-eluding alternative that historically has been popular with Russians and Ukrainians seeking warm weather. Compared with its neighbour across the Adriatic, it’s “a more affordable Italy,” said Joanna Millick, director of sales and private journeys at MIR Corporation, which offers Balkan tours.

Ancient towns, from Herceg Novi on the edge of the Bay of Kotor to walled Ulcinj near the Albanian border, dot the 80-kilometre coastal drive. Construction is rampant, suggesting more, if not mass, tourism isn’t too distant. We found crews restoring the Venetian palaces lining seafront Perast.

Those, along with the forts strung along the coast, testify to the centuries-long fight for control of this strategic region by the great seafaring powers of the 14th century through mid-19th century. Montenegro only began to gain its shore from the Ottomans and the Austrians in the late 1800s.

Not that tourism is exactly new: After all, in the 1960s and 1970s, celebrities like Elizabeth Taylor and Sophia Loren vacationed at Sveti Stefan, a peninsular village-turned-luxury-resort, now run by Aman hotels and still favoured by the glitterati (the Serbian tennis star Novak Djokovic was married here in 2014).

But more recent foreign investment has fuelled its expansion, with luxury developments like Porto Montenegro in Tivat, home to a Regent hotel and a yacht marina, and the Miami-like high-rises that surround the walled heart of Budva, now filled with restaurants and cafes.

As you push farther south, and mosques begin to mingle with monasteries, time and tourism seem distant. At Stari Bar, an ancient ghost town that was once traded between the Venetians and the Turks, we scrambled around the deserted ruins and found a cat nurturing a litter of kittens in an ancient urn. Alley with shops in the old town of Budva

By the time we got to southernmost Ulcinj, we had the walled city virtually to ourselves, from a museum of archaeology, ethnology and the arts, filled with ceramics, coins, and carvings from the Romans through the Ottomans, to the new Pirate seafood restaurant overlooking the sea.

Many visitors arrive by ship, sailing through the fjord-like Bay of Kotor to the walled city of Kotor, long under Venetian rule, with the winged lion of St Mark on its sea-facing gate to prove it.

Cruisecritic.com named Kotor the second most popular port in the eastern Mediterranean, after Dubrovnik last year. We found ourselves in Kotor, along with thousands of passengers from a Celebrity Cruises ship, snapping pictures of the stray (but evidently well-fed) cats that stalk the cobblestone plazas and nap on stone staircases.

A series of these steps climbs a mountain to the fortress of St John, a medieval stronghold improbably guarded with walls that ascend nearly 900 feet. It’s an exhausting post to reach, but one that rewards you with sunset views over the bay-plunging mountains.

When the ship sailed out that evening, romance returned to candlelit restaurant terraces within the walls, and Nikšicko beer-drinking yacht crews filled the outdoor tables in view of a 17th-century clock tower.

Behind the coastal mountains of Montenegro, via a dizzying switchback road, lies an entirely different country that is rugged, largely undeveloped and a real bargain, as epitomized by the six-inch-high cevapcici sausage sandwich at Kole Restaurant in Cetinje, which costs 2 euros [Rs 159].

Cetinje, the former capital of the Montenegrin kingdom, established in the 15th century, remains the country’s cultural heart. A cluster of pedestrian-only lanes, where art students paint en plein-air, surrounds a series of national museums devoted to art and history. A joint ticket (10 euros; Rs 792) provides entry to six museums, including the Biljarda, the 19th-century residence of Montenegro’s favourite ruler, the poet and philosopher Petar II Petrovic Njegoš, and named for his billiard table, the country’s first. He died in 1851 and is buried in a monumental mausoleum onMount Lovcen outside town.

Its last ruler, Nikola I Petrovic Njegoš, inhabited a modest palace across from the Biljarda until he fled the country in 1916, as Austrian forces invaded during World War I. Now known as King Nikola’s Museum, it is filled with treasures, including antique Chinese urns, Persian carpets, Venetian mirrors, Indonesian furniture and royal portraits from families across Europe. That the royal collection survived the World-War-II occupation of Montenegro by Italian forces is miraculous.

“He was known as the father-in-law of Europe,” said our guide proudly, explaining that five of the king’s daughters had married into royal families across the continent, including Princess Elena, who wed an Italian royal and earned an in-law’s respect. “Because they were family, the Italians preserved the home.”

From coastal isles to Alpine valleys, Orthodox monasteries are strewn across the country, many covered in vivid frescoes of elongated, big-eyed saints depicting stories from the Bible. But the most impressive are in central Montenegro.

The Ostrog Monastery, for example, is shallowly built into a cliff face at 900 metres, and reached from the highway between Podgorica and Nikšic by a slim, shoulderless, zigzagging road that we nervously shared with intrepid bus drivers. Barefoot pilgrims walk an even more vertical path there, culminating in a dark, rock-hollowed room in the monastery housing the tomb of St Basil, where a priest blessed each visitor individually. The faithful kissed an icon, offered coins and walked from the room backward—so as not to turn their backs on the holy site—past radiant mosaics placed into the cliff walls. Ostrog Monastery is built into a cliff face at 900 metres.

Many roads to the region are precipitous, narrow, and distractingly scenic, including the stretch from Podgorica north along the Moraca Canyon to Kolašin. A new highway, expected to open this year[*], should expedite travel from the city to the slopes. Ample Airbnb inventory supplements the ski chalets of Kolašin and Žabljak, another nearby ski town and the gateway to Durmitor National Park, the largest of Montenegro’s five national parks. We provisioned our rentals at frequent roadside stands selling home-made wine, honey and cheese.

The turquoise Tara River slices through these Dinaric Alps, creating Europe’s deepest canyon at some 1,300 metres, and thrilling white-water paddlers. Overnight rafting trips take in the deepest section of the Tara Canyon, while popular day trips bump over roiling Class-III and -IV rapids, depending on the time of year.

On the suggestion of our Airbnb host in Žabljak, we signed up with Rafting Tara—Triftar, run by Goran Lekovic. Our excursion seemed to encapsulate Montenegro with its mix of entrepreneurial gamble and sincere hospitality. An inscrutable van driver—likely limited by the language barrier—distributed well-worn wet suits and mismatched neoprene bootees to us and a backpacking couple from Switzerland.

The turquoise Tara River slices through these Dinaric Alps.

At the river launch, rival guides with emergency radios and the muscles of seasoned river runners pushed off in profiles that were in stark contrast to our captain, Mr Lekovic himself, who chain-smoked, wore loafers and limited his safety instructions to “Team, paddle!” on approaching the rapids. Despite appearances, he competently navigated the turbulent, high-water rollers as we rollicked for the next few wet hours.

The lunch promised in the excursion turned out to be a three-course home-made feast featuring roast lamb on the nearby Lekovic farm, followed by warm offers of Turkish coffee and cigarettes (trips are priced between 45 euros and 190 euros; Rs 3,500 and Rs 15,000).

The river curves through the northern section of Durmitor National Park, home to 48 peaks above 1,800 metres. Here, bare limestone crests shade pockets of snow, and scree slopes run down to glacier-carved lakes and wildflower-filled meadows. Over the May holiday celebrating Montenegro’s 12-year independence, we hiked lightly travelled but well-signed paths, forded streams, crossed under waterfalls and picnicked on lakeside boulders in fragrant pine groves.

“New country,” smiled the park attendant at the admission booth, granting us, like everyone else, free admission on the holiday. “But old place.”

Populated, I might add, by people curious about outsiders, rather than aggressive towards them.

There are airports at Podgorica and Tivat, or fly to Dubrovnik in southern Croatia and catch one of seven buses a day to Herceg Novi and Kotor, or two buses a day to Podgorica.

The rail network is limited but bus service is reliable and affordable. Driving can be challenging—many roads are extremely narrow and cling to the sides of mountains.

In Podgorica, Hotel Podgorica was recently updated; doubles from Rs 8,500.

In Cetinje, La Vecchia Casa is within a lush garden; rooms about Rs 2,700. In Kotor, Hotel Astoria is in a restored 13th-century palace; rooms from Rs 9,900.