On a Clear Day

Those four words can be a traveller's boon or bane. 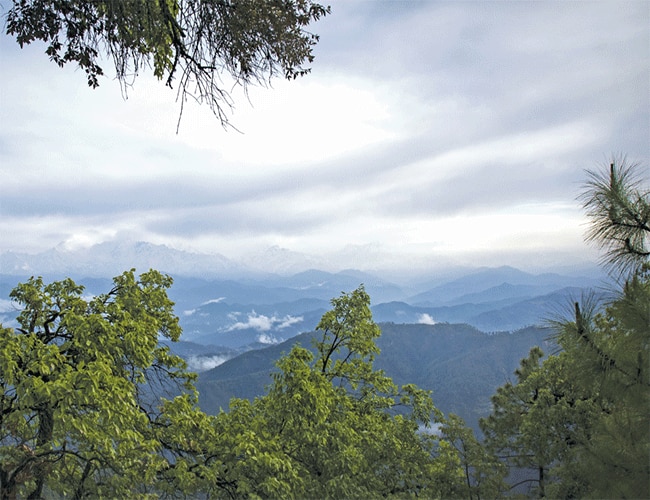 It is the nature of the footloose traveller to muse, to ponder, to introspect. As one of the tribe, I find myself thinking deeply about one set of four one-syllable words that hold in them much hope, despair and patience.

On a clear day. This was the leitmotif of my travelling life. Wherever I went, whatever I saw, however happy I was to see what I saw, there was always someone in the vicinity who shook his or her head slowly, smiled in commiseration and began a brief monologue with "On a clear day ..." At the core of the monologue was all the wonders I was missing, of course.

A trip through Tuscany had us crossing what looked like snow-clad mountains. Not just the peaks, the whole range seemed covered in white. A closer look revealed that we were passing the mountains from where the famous Carrara marble, colours that ran the gamut from warm ivory to clotted cream, was quarried. I could have managed a great photograph, but alas it was a hazy day. And sure enough, the Italian next to me said, "Ah, on a clear day, the white of the marble would have dazzled you. You'll find it everywhere in the vicinity: statues, cathedrals, benches, sculptures, pavement, fountains." However, despite the pang that inevitably accompanies those who are not able to take an Instagram-worthy picture, I was able to shake it off and admire the statues, cathedrals, benches, sculptures, pavements, fountains instead.

At the Golden Gate Bridge in San Francisco, it hit me harder. We'd made quite a few trips to the carmine-coloured marvel, but the infamous and all-too-frequent fog held strong and ensured---whenever we went, however long we waited---all we could see were the looming pylons of the magnificent structure. Sure enough, an American friend accompanying us uttered the mandatory words. Apparently, on a clear day, I could see the tallest bridge in the United States in all its stupendous detail, its rivets, its suspension cables, its roadway that flexes in the wind. Oh, and it didn't help that no photos worth sharing on my social networks could be taken here, either.

The old Pink Floyd song 'Obscured by Clouds' became my personal refrain. Up on the skydeck on the 103rd floor of the Willis Tower, aka the Sears Tower in Chicago, I saw nothing much---but I sure heard all about what I could have seen on a clear day … right across Lake Michigan to Indiana, Michigan and Wisconsin. Well, whatever.

The jinx continued to hold, and my nascent reputation as an Instagram-photographer was taking a hit. When we flew over Switzerland, we flew over the prettiest puffs of cloud cover that, well, covered everything at ground level. In Beijing, as a series of smog-filled days enveloped the city, my young hostess looked wistfully down the 24 floors of her building and remarked, "On a clear day …" I held my breath. She continued, "We can see clearly into the food court downstairs. We can see if a rack of lamb has been put on the grill and decide on our dinner menu."

The same thing happened on the viewing platform of the Empire State Building in NYC, at Victoria Peak in Hong Kong, up on the Catalonian mountain of Montserrat, atop the Lion's Rock in the ancient Sri Lankan city Sigiriya and through most of the Scottish Highlands. Sometimes it was cloud, sometimes it was haze. Whatever it was, it fogged up my sightseeing well and good.

In Bhutan, it was the height of summer and at the Tiger's Nest monastery, perched in its lofty redoubt, I couldn't catch a glimpse of even one snow-clad peak. Yes, it was the haze in action---or rather sluggish inaction. Watching my increasingly despondent neck movements, "Ah, but on a clear day in winter," a passing lama told me. Words of wisdom from the wise.

In Uttarakhand, I was visiting a friend who'd built herself a log cabin with views of the Inner Himalayas from her veranda. From her veranda! It couldn't get better, could it?! Except, when I visited, the view was blurred by mist and cloud and haze---so basically a triple whammy. I'd wake up at dawn, I'd go climbing some levels above the log cabin, I'd strain my eyes till they'd start to water … but nary a look-see of Nanda Devi, Nanda Kot, Chaukhamba, Trishul, Shivling or  Panchachuli. I soon became a familiar sight to passing shepherds, to Mohan Master---a retired schoolteacher well known in the hamlet, to the volunteers who worked hereabouts. The shepherds would tell me, "Achche din mein pahad saaf dikhai deta hai," the Hindi version of 'on a clear day'.

"Let's try the Binsar Hill," my friend suggested. "It's ringed by the mountains, a stunning sight." So we set off and by late afternoon, we were at the spot, staring at the horizon. But everything was wreathed in an impenetrable haze. "The mountains lie just beyond," said my friend, and it was true, I could sense them looming unseen but breathing quietly. "Now, on a clear day," she began, then stopped, encountering my look.

I stayed a week in the foothills of the Inner Himalayas but didn't see anything beyond momentary glimpses of white. And then I became a cloud-whisperer. Without a clear view, I learnt to appreciate the oblique view. I watched with elation when the clouds cleared but with no real dismay when they gathered afresh. 'It is how it is' became my mantra.

Then, one lovely, bright day atop the Harbour Bridge, lovingly called The Coathanger in Sydney, our guide began, "On a clear day …" I scanned the sky; it was cloudless. "It is a very clear day," I informed the man. The affable Aussie said, "Yup, that was what I was saying. On a clear day like this, you can see forever."

And you know what, you could too. It's all a matter of perspective.