Not Ones To Cop Out, Policemen Jump In With Innovative Measures And Win Hearts

Extraordinary times require extraordinary measures. Indian police are showing that they can think out of the box to spread information and some much needed cheer 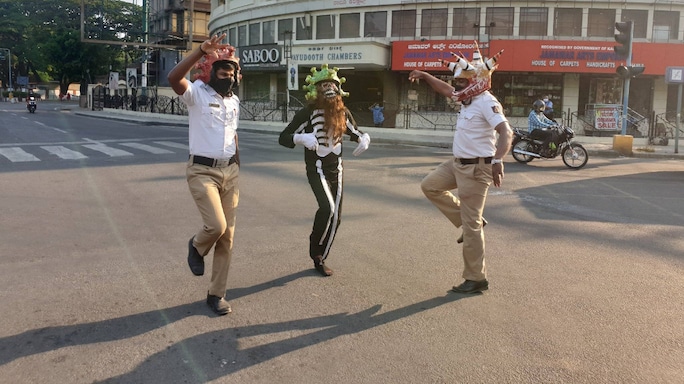 Cops around the country have got a bad rap for their aggressive behaviour in recent times, even if it was to enforce the lockdown. But certain officers, who are also gentlemen, have found innovative ways of spreading information, and have struck a chord in the public, spreading some much-needed cheer. In the process, they may have done a bit of damage control for the bad press attracted by their too-tough colleagues.

Last Thursday, a group of Kolkata Police officers from the Gariahat Police Station, entertained the residents of a south Kolkata neighbourhood with a popular Bengali rock. It was a modified version of the Bengali singer Anjan Dutta’s hit song 'Bela Bose'. They sang to its tune, replacing the words that roughly translated, would mean, “Bela, we will soon be free of corona, let us wait for these 21 days to end”. Residents of Mandeville Gardens were seen cheering the cops lustily from their balconies, as the men in white uniform belted out the popular number, with modified lyrics in the videos that went viral.

In another part of the city, the Rabindra Sarobar Police Station put up a similar performance, this time modifying a song from the iconic Satyajit Ray film Goopy Gyne Bagha Byne. The underlying message was similar: “We shall fight coronavirus together.” According to Kolkata Police, this was an initiative to "alleviate distress" of the people who have to stay in their homes under lockdown after the coronavirus outbreak.

Music in the time of CoronaNothing better than music to heal the stressed mind. KP attempts a musical connect to pep up fellow citizens forced to stay indoors in these trying times. pic.twitter.com/W2AUejrGHq

‘Goopy-Bagha' in fight against Corona!Yet another musical effort by KP personnel at Rabindra Sarobar PS area to enliven another stressful day of fellow citizens with a deftly modified song from the iconic Satyajit Ray movie ‘Goopy Gyne Bagha Byne’ pic.twitter.com/BGq2EEhMMV

How could the Punjab police stay behind when it involves dance or music? A policeman, Baljinder Singh, recently released a bhangra pop music video to spread awareness. It impressed the Punjab Chief Minister Amarinder Singh so much that he shared the video on his social media. The video has now gone viral. Another clip of Punjab police dancing to a rehashed version of the popular folk song 'Bari Barsi' has also won hearts and gone viral. The modified lyrics of this song also talks about the virus and the precautions people should take.

A song on precautions against Coronavirus by SI Baljinder Singh of @PunjabPoliceIndia. A creative way of spreading awareness on #COVIDー19. pic.twitter.com/Qvbc9bMWo1

However, Kolkata and the Punjab police are not the only ones adopting novel ways to educate, entertain and warn people about the novel coronavirus. Police forces in other parts of the country have adopted out-of-the-box means to drive home the message on the gravity of the pandemic. The Bengaluru Police came up with their own innovative way to spread awareness about COVID-19 and how to maintain social distancing. Traffic constables and officers wore helmets resembling the coronavirus to educate those on out on the streets, despite the lockdown. The videos of traffic police, with their coronavirus helmets, running towards the bikers and cyclists imitating a virus attack have gone viral on social media.

The police in Chennai too have resorted to the 'corona helmet' to spread awareness about the disease.

Since the coronavirus has led to tens of thousands of deaths worldwide, the Andhra Pradesh cops focused on this aspect to drive home the message. They dipped into mythology and brought to life Yamraj, 'the lord of death' and his assistant Chitragupta. A man dressed as Yamraj sat on the Kurnool's rural police vehicle and went around warning the public that they should stay indoors since Yamraj was roaming the streets.

In the same district, another police officer was seen riding a horse that was covered with what looked like the coronavirus. This may seem a bit creepy or irk animal rights activists, but there is little to suggest that the animal was harmed in any way.

Along with health professionals, it is the police that have been at the forefront of fighting the invisible enemy currently. They are generally at the receiving end for their behaviour towards the public in general, but with these innovative ways, they have shown that there is a beating heart within that cares.