Metronomics: Types of People You Meet on the Metro

The metro can be a strange place: It’s a hotbed of personality types you get to rub shoulders with on a daily basis. Check them out. 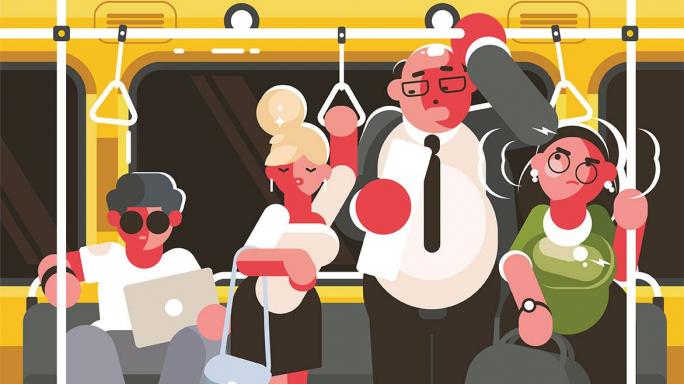 If you’re like me, whose life moves along the wheels of the metro-rail, you would know the reason why I’m telling you this. The metro’s easy on the pocket, usually saves you the trouble of being stuck in traffic, and if you are a people-watcher (or even if you aren’t), it’s a hotbed of personality types you get to rub shoulders with on a daily basis.

While it's usually the seat-offering-Samaritan I hope for on most days, the list of co-riders I may want to stay a metro line away has been curated after 1,280 days and 1,500 hours of riding in metro.

Read this and spot them on your next ride, dear metro rider, and make a mundane ride a lot more fun by playing metronomics.

Equipped with the keenest set of eyes and the sprightliest set of Hermes’s sandals (no, not the brand, Cher Horowitz!), the opportunist can make even the most athletic sprinter nervous. Standing slyly in the corner, they have their eyes everywhere—closing of books, dismembering of earphones, locking and putting away of phones—they are watching and they are hearing. And in the blink of an eye, they are found victoriously perched upon the just-vacated seat.

I mean, who doesn’t want to listen to other people's music, right? However, what’s more interesting than listening to strangers never using earphones is listening to them croon while they are lost in the sound of their earphones’ music. Writer’s advice: RUN!

The metro can seem nothing less than a jungle—people hunching hungrily for the next empty seat or staring endlessly, as if gauging the degree of threat you might pose, but that does not mean that kindness is dead. Big love to people who actually look out for senior co-passengers, pregnant gentlewomen, or those with weary shoulders, tired eyes, heavy-looking baggage, or maybe a child on the lap and smilingly offer their laboriously acquired seat to them.

Beware of these people! All eyes on the door, they strategically stand two centimetres away from the centre to land on the first empty seat. Blinders on, they clutch their handbags or just fold their arms in a proper-perpendicular fashion, literally elbowing their way into the train. The trick to avoid complaining later is to spot them before the train arrives and secure your place exactly behind them—mind you—never ahead, and definitely never on the side.

If you are into eavesdropping, the animated metro-riders attached to their phones could be your pals. However, if you don’t want to know why x-friend has been stealing their college notes, or how y-friend will not be able to meet them because he got sick to the bones after a night out, once again—scram!

If you are not new to having people bite off your Netflix account password you may be tolerant of this one. Imagine this—you are watching the latest episode of Brooklyn Nine-Nine and suddenly you hear a sigh followed by a ‘wow’! Who could that be? You check your earphones—snugly plugged in. You look left, nah, she is busy texting. You look right and you see a curious set of eyes glued to your phone/tablet reading the subtitles and laughing along! What to do, you ask? Try sharing a few giggles along a shared-watch and tell us how that went.

Have you ever so strategically planned your entry that you managed to nudge ‘The Elbow Charger’, stepped away from the Loudspeaker, followed the Opportunist to grab a similar opportunity, but just as you were about to lay your glorious hindquarters onto the seat, you were blocked by someone prohibiting you from sitting because they were saving that seat for their friend? Beware, ‘The Prohibitor’ is the crusher of your derriere dreams. She/he is hard to identify if one is not paying keen attention. How to spot them: Notice two or three closely located giggling or chatting or just nodding people and KNOW that they are going to be wanting to sit together.

The metro can be a strange place. As amusing as it is to come across all kinds of people, the worst of the lot is the one who reveals the dark side of metro rides (and in turn of public transport where you lose all concept of space, cramped into compartments)—the sexual harasser. A simple Quora search on sexual harassment in the Delhi metro will reveal how all genders in the metro get harassed on a regular basis. The worst part is that one finds it impossible to identify a particular face in the crowd and even if they do, it is very easy for the accused to say that it was not them. Do what you can if you are certain of the perpetrator to break the silence of abuse. Call out and take action whenever you see something like this happening to you or to someone else.

All GIFs taken from GIPHY