Khajuri Khas: A Neighbourhood In Tatters, Stalked By Fear Still

RD visits the homes and families that were ravaged by the rioters. A report from the ground 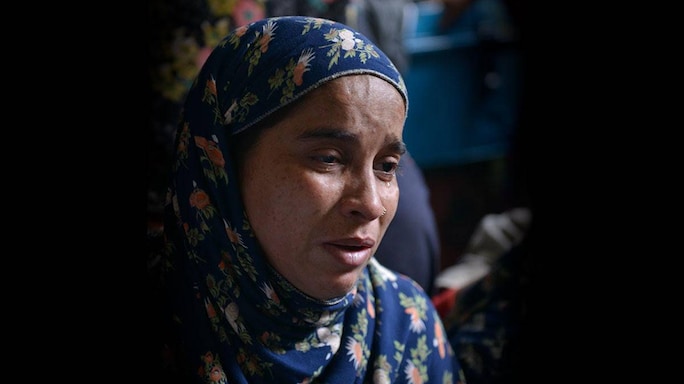 Safina, a victim of rioting in Khajuri Khas, narrates the story of their trauma. (Photo: Yasir Iqbal)

On a weekend visit to Khajuri Khas, ravaged by the February rioting, Reader’s Digest found that fears of another wave of violence around Holi, on Tuesday (10 March), have been stalking the people of this neighbourhood on the north-eastern fringes of Delhi. In the absence of any kind of reassurance from the administration—Central, State—or visits from political leaders, the residents of this area, mostly migrant labourers and working-class people from Bihar, looked shattered and panic-stricken.

To reach Khajuri Khas, you need to drive off the heart of the sprawling megacity towards its north-eastern borders. Crossing the Signature Bridge over the Yamuna, the last of the capital’s shiny structures, you enter a gritty terrain with rows of urban slums, squeezed between commercial establishments. Crossing the stench of the Chand Bagh Nala (sewage canal), and the broken roads past the Sher Pur Chowk you reach the narrow lanes of Khajuri Khas, skirted by open drains everywhere.

Even though paramilitary forces are seen on the arterial roads and in the lanes in a scattered manner, the fear and mistrust among residents persist. “On the day of the incident, the police did not take our calls. Later, when they arrived, they did nothing to stop the rioters: They either stood by watching or beat us up with their lathis while trying to evacuate us,” says Mushtari Khatoon, 42, who rushed in from Chandu Nagar, across the road, to rescue her extended family. Many of the residents of Khajuri Khas regret that their “non-Muslim neighbours” did nothing to protect them.

When Reader’s Digest approached the Hindu families in lane 39 to seek their version, they were reluctant to speak. Most of them said they had left their homes, along with their children, to avoid being hurt, and did not witness any violence.

In lanes 4, 5 and 39 of Khajuri Khas, people of both communities live cheek by jowl. “It was the Muslim houses in the area that were targeted,” say residents, and razed to ashes by rioters on 25 February, rendering them homeless. While no one was killed, the death toll from other areas has risen to 52, which includes Muslims and Hindus. In Khajuri Khas, homes and property belonging to people from the Muslim community were completely destroyed. Some homes had very basic amenities, but many of them had valuables—washing machines, TV sets and refrigerators—acquired over time. Certain homes also had cars and bikes parked close by that have been gutted.

Many of the burnt down spaces also housed small businesses, shops and workshops. Residents said they were unable to collect valuables such as jewellery and cash before they left their homes in extreme panic. None of these belongings could be recovered later—they were either looted by men who went about chanting “Jai Shri Ram” and “Dilli Police Zindabad” or were lost in the fire, residents reported. The rioters were armed with rods, country pistols and guns, according to eyewitnesses. “They flooded the lanes in hundreds, set fire to homes with petrol bombs and threw tear gas at us. Many of them were wearing riot gear usually used by policemen,” said Mohammed Shahid, 22.

Says Saleha, the teenaged daughter of Mohammad Munazir, who was supposed to be married this June: “My parents put together my dowry bit by bit, but their dreams have been turned into ashes.” Munazir tried to escape poverty by leaving his village in Bihar and build a better life in the capital decades ago. Today, standing before his gutted two-storeyed home that he had built along with his brother, he is disconsolate. His wife Nuhzat Khatoon, 35, breaks down in tears, several times, as we speak. “We built up everything with so much love and hard work, but see what they did to us. What did we do to deserve this?”

Mehbooh Alam, Secretary of the Fatima Mosque said on Saturday that relief work was patchy at best. Homeowners have been granted Rs 25,000, by the Delhi government, however, families that live on rent have not been able to access the compensation. “Another problem is that if there are many brothers in a house, only the eldest brother has got the money,” says Mohammed Shahid.

Along with material damage, it is the trauma—of turning homeless overnight, and being singed by the mindless violence—that is evident. Says Safina, 35, “My husband is so shaken, he has been bedridden and does not speak. Who knows if he will ever be alright?” Sabreen, a grade-six girl, speaks bravely, but her fear of something happening once again makes her break into tears. Their neighbour, an elderly man, it seems, has been rendered mentally disturbed and is roaming the streets speaking incoherently.

As a neighbourhood comes to terms with its loss, it is individuals and non-profit organizations that are trickling in to hold their hands and ensure they return home with dignity. But will they find the means and strength to go back home and build their lives from scratch, is the question that is writ large on Khajuri Khas.