In The Times Of Coronavirus, 5 Ideas That Celebrate Indian Jugaad

From a ‘social distancing bike’ to an e-rickshaw with four separate compartments for passenger safety, Indians are thinking out-of-the-box to fight COVID-19 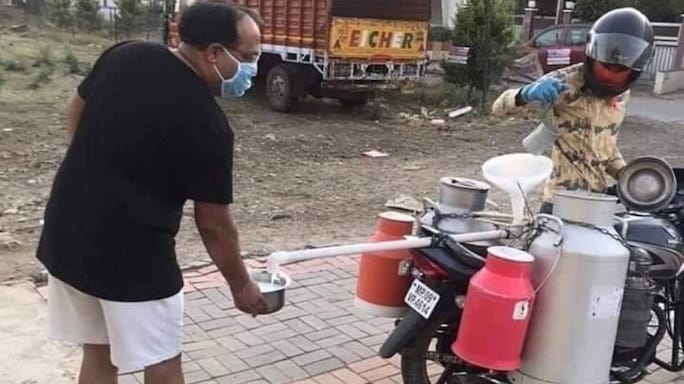 A milkman in Madhya Pradesh delivers milk to a customer from a distance. (Image courtesy Awanish Sharan/Twitter)

Necessity is the mother of invention. The coronavirus pandemic and the need to stay safe have fuelled desi jugaad (innovation, if you will) across the country. From ironing bank cheques to ‘disinfect’ them to a ‘social-distancing bike,’ little ideas that can bring significant change demonstrate the Indian genius for local creative improvisation. We look at five of these ideas that are creating a buzz:

A rickshaw with compartments

For most of us, travelling in an e-rickshaw is all about being squeezed and boxed into a corner. Social distancing is perhaps the last thing you would imagine possible on an e-rickshaw. But one e-rickshaw driver in West Bengal dared to think out-of-the-box. By placing partitions, he divided the rickshaw into four separate compartments, reducing the chances of physical contact between commuters to zero. The bright idea got a pat from business magnate Anand Mahindra himself, who shared a video of the modified e-rickshaw on his Twitter page.

The capabilities of our people to rapidly innovate & adapt to new circumstances never ceases to amaze me. @rajesh664 we need to get him as an advisor to our R&D & product development teams! pic.twitter.com/ssFZUyvMr9

Once upon a time in Indian cinema, many a romance would start with a bike ride, the heroine tightly clutching on to the hero, when out of the blue, he applies the brake (deliberately!).

However, in the times of coronavirus and social distancing, Partha Saha from Tripura’s Agartala, has come up with a battery-operated bike where the distance between the rider and the one sitting pillion is one metre. The idea came to Saha when he was worried about how he would drop his nine-year-old daughter to school in the wake of the new COVID-19 guidelines. The bike once charged for three hours can run 80 kms. The innovation earned Saha praise from Tripura Chief Minister Biplap Kumar Deb.

In the land of jugaad, a milkman, whose picture has now gone viral, can be seen selling milk while maintaining a safe distance from the buyer. The picture, likely taken in Madhya Pradesh, shows the milkman using a funnel and a long pipe to channel the milk into the container held by the customer. That way, they both avoid contact and practise social distancing.

Before him, a shopkeeper in Kerala had tried doing something similar. He used a pipe to provide no-contact delivery of essentials.

While most of us would think an old fridge is at best a converted shelf, researchers at National Institute of Technology Karnataka (NITK) have turned it into a disinfection chamber, reported ANI. The device, known as ‘ZERO-COV’ can disinfect the items placed inside the chamber, from veggies to books to even currency notes. The researchers claim if you switch it on for 15 minutes, it can kill 99.9 per cent of the germs on the surface of the items.

If you think you can use a steam iron only to iron your clothes, think again. A cashier in a Gujarat bank is using a steam iron to disinfect cheques, although the jury is still out on whether this is an effective technique or not.

In a video shared by Anand Mahindra a few weeks ago, the cashier at a Bank of Baroda branch can be seen collecting the cheque using a pair of tongs and then ironing it on both sides to ‘disinfect’ it.

In my #whatsappwonderbox I have no idea if the cashier’s technique is effective but you have to give him credit for his creativity! 😊 pic.twitter.com/yAkmAxzQJT

Do You Like This Story?
21
13
Other Stories
Please enter valid text
Must Reads
Latest Issue