How Women Have Led The Charge For Environmental Justice The climate crisis is a difficult conversation—the science is dense, the subject riddled with politics and industrial gluttony and it suffers from a serious perception problem; significant portions of the world’s population continue to view it as a distant issue. Unlike an evil dictator, who justice seekers cab rise in revolt against, climate change needs structural changes, which history informs us, takes several decades. But, women have always been up to this Sisyphean task.

Whether it is young activists like Severn Cullis Suzuki, ‘the girl who silenced the world for six minutes’ in 1992, or more recently Greta Thunberg, who led the large global marches against the climate crisis have been popular voices for change, women have always been ahead of their time when it comes to the environment.

1. Environmentalism came into existence in the early 1800s, routed through another ideology—Romanticism, which celebrated nature, underscoring its beauty, challenging the solely scientific view prevalent at the time. One of the early environmentalist advocates from this period is Mary Shelley. Her seminal novel Frankenstein, besides being a cautionary tale for the excesses of science, and a study of the relationship between human beings and nature, was informed by extreme weather. She started writing the novel in 1816, the year that came to be known as ‘The Year Without a Summer’—it snowed in July that year. Such drastic weather conditions are believed to have spurred her into writing this cautionary tale. 2. When DDT (dichloro-diphenyl-trichloroethane) was developed in the 1940s, it was a wonder chemical, a simple solution administered liberally to combat insect-borne diseases and used for controlling insect populations. This changed only after Rachel Carson’s book Silent Spring, published in 1962, drew mainstream attention to the stark dangers of what synthetic pesticides did once they were introduced into the biosphere—these pesticides not only arrested insect infestations, but impacted the food chain in a manner that threatened bird and fish populations. Though much of this American ecologist’s data was known to the scientific community, she was a trailblazer, having presented it to the general population, mapping out its grim and far-reaching conclusions. Her work galvanized the environmental movement and led to the creation of the Environmental Protection Agency in 1970 and banning of DDT in 1972, in the United States. 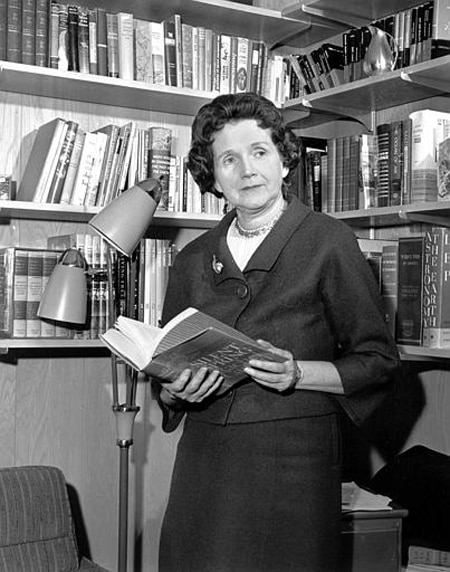 3. The climate crisis affects all, but it is well documented that women face greater risks when climate-related disasters disrupt their communities. Women accounted for an estimated 61 percent of fatalities in Myanmar after Cyclone Nargis in 2008, 70 percent after the 2004 Indian Ocean Tsunami in Banda Aceh, Indonesia and 91 percent after Cyclone Gorky in Bangladesh in 1991.Climate change is harder for the poor and women—who form 70 per cent of the world’s poor. According to UN estimates women constitute 80 per cent of those displaced by climate change.

4. The Chipko movement in the 1970s saw rural Indian women, hugging trees in the Himalayan region, now Uttarakhand, cutting a compelling, if romantic, image. But, when the Chipko Movement officially began on 24 April 1973, it was started by all-male Sarvodaya workers at Mandal, Chamoli district against government-backed logging of forests in the region. Women stepped in to lead the charge of the movement, after a sustained dialogue with the male workers. As primary caregivers in charge of cultivation, livestock and children, women understood the link between their victimization and the denudation of forest cover—they had seen lower agricultural yields, erosion, depleted water resources, and increased flooding throughout much of the surrounding areas due to other mismanaged logging endeavours in the region. Their survival threatened, women came forward in support in large numbers, transforming it into a women’s movement for forest rights. 5. Making the claim that countries helmed by women leaders do a better job at handling climate crisis is fraught with the dangers of essentializing, which has often served as a tool to hold women back in politics. Another problem is the sample size of female leaders—it is dismally small. But, there does seem to be a correlation between greater female representation in parliaments and stringent climate change policies. A 2019 study examined the legislatures of 91 countries and found that electing more female parliamentarians results more ambitious climate protection laws and even in lower carbon dioxide emissions!

6. The first African woman to win the Nobel peace prize was an environmental activist, Wangari Muta Maathai in 2004. The first female scholar from East and Central Africa to take a doctorate (in Biology), and the first female professor ever in her home country of Kenya, she started the Green Belt movement in 1977. The grassroots movement encouraged rural women to plant native trees to combat deforestation, to stem ecological decline and enable a sustainable model of livelihood. The movement contributed to the planting of over 30 million trees and expanded to train communities in democratic governance, conflict resolution and human rights. 7. Since 2014, with the rise in climate crisis movements, women have been protesting in larger numbers than their male counterparts to protect the planet. The first People’s Climate March, which attracted over 400,000 people worldwide was dominated by women.

8. Some of India’s fiercest environmental battles have been spearheaded by women. The Narmada Bachao Andolan, a people’s movement organized to stop construction of the World Bank-financed Sardar Sarovar Dam, in 1985, which displaced over 32,000 Adivasi families, who still continue to wait for resettlement even today, was led by Medha Patkar, Rashida Bee and Champa Devi Shukla in a David versus Goliath contest took on the Union Carbide Corporation, igniting an international campaign demanding accountability for the world’s worst industrial disaster—the 1984 Union Carbide gas leak that killed 20,000 people and maimed more than 150,000 in Bhopal. Both, these grassroots environmental struggles were honoured by the Goldman Environmental Prize, popularly known as the ‘green Nobel’ in 1992 and 2004 respectively.