How Books Changed Form: From Calamus To E-Books 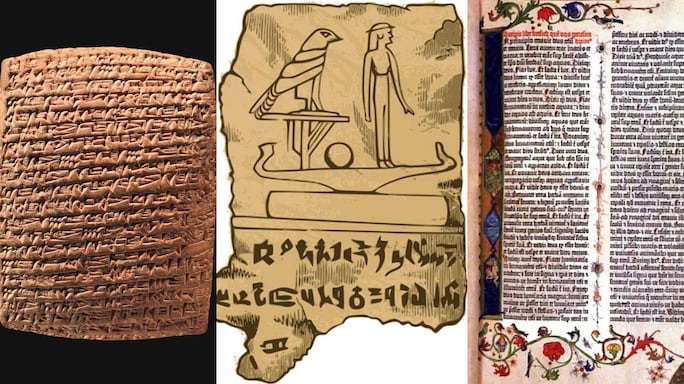 (From left to right:) a clay tablet with cuneiform characters, a fragment of an Egyptian papyrus scroll, a page from the Gutenberg Bible

To understand the evolution of books from the ancient to the contemporary, you need to be aware of the simultaneous development of the means of writing and the mediums through which writing has found form through the ages. Here’s a look of how our beloved books, as we know them, came to be.

One of the earliest instances of humans recording information can be traced back to the third millenium BC, in the clay tablets of the Mesopotamian civilization. The Mesopotamians used the calamus, a pointed triangular instrument, to inscribe the characters on the clay tablets, which were then baked and dried. 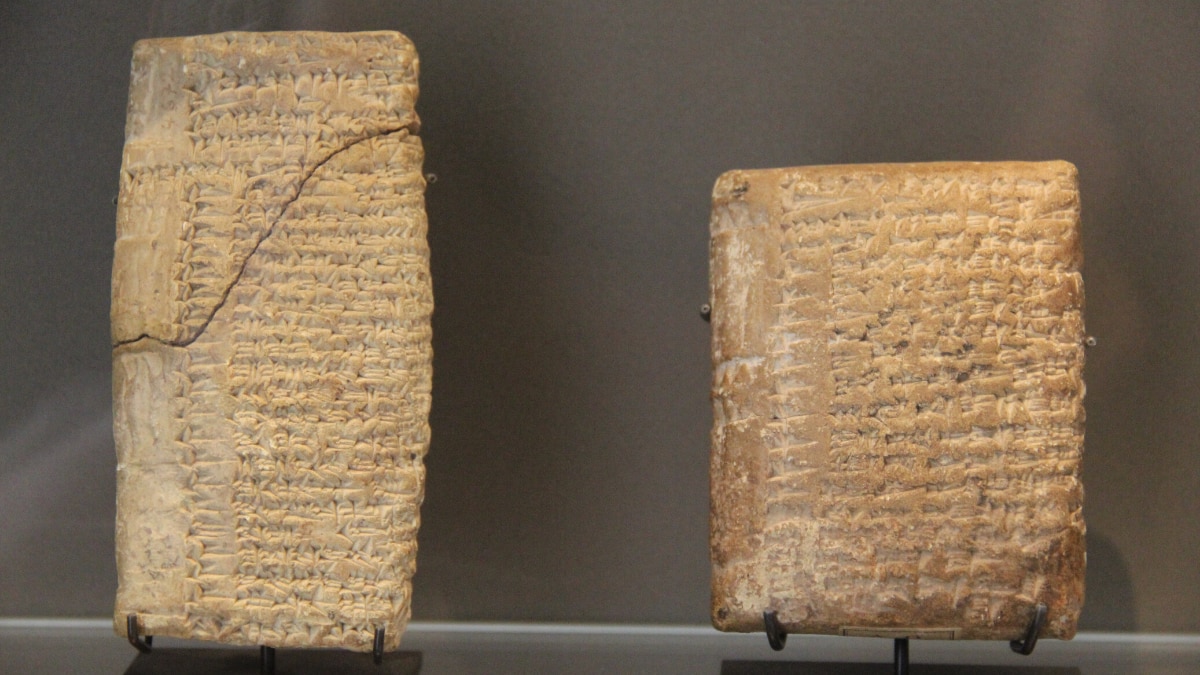 Cuneiform tablets from the 2nd millenium BC (Photo: Wikimedia Commons)

The Sumerians—a civilization from circa 4,000 BC that occupied what is now southern Iraq—developed the cuneiform style of writing, characterized by wedge-shaped marks made by an instrument called the stylus. The Sumerians were among the first to devote themselves to perfecting a ‘school of writing’, and scribe schools flourished in the region. In the early days, business transactions and contracts formed the bulk of written content, but later, stories and myths were also inscribed.

The significant discovery of papyrus as a writing medium, was made in the humid plains of Egypt, sometime during the mid-2nd millenium BC. The marrow of the papyrus reed plant was extracted, and then humidified, pressed, dried, glued and cut to form this very thick writing surface. Prayers and sacred texts form a bulk of the content of the old Egyptian scrolls, some of which stretch to several feet long.

Even though the Egyptians continued to export papyrus, the Greeks and the Romans gradually shifted to the use of parchments around the 3rd century BC. Made from animal skin, parchment was expensive but more durable, so it was easier to preserve scrolls and even erase and edit its text. As the centuries passed, both the Greek and Roman empires saw an unprecedented proliferation in writing and books, which in turn precipitated the need and development of organized libraries and scriptoriums. The Great Library of Alexandria (circa the 3rd century BC), which also had an exhaustive collection of papyrus scrolls, is probably the most well-known library from this period. Both Greek and Roman libraries became invaluable archives of ancient knowledge and literature of all kinds, most of which was tragically lost during the Dark Ages.

Meanwhile, in India and across South-East Asia, the ubiquitous presence of palm trees led its inhabitants to create their own writing surface. Creating a palm-leaf manuscript required one to first smoke and dry the leaves, which were then cured and cut into rectangular surfaces. The text and illustrations were drawn on with a stylus made of metal, bone or ivory, and the ink or colours were allowed to settle into the leaf’s grooves. The edges were perforated and strung together to form manuscripts, the oldest of which dates back to the 9th century BC. These repositories of religious teachings, scriptures as well as cultural records became treasure troves of information about these ancient societies and the times.

The rise of the modern printed book owes much to three seminal developments:

Paper: Papermaking developed in China just after the 1st century BCE but it wasn’t until the 3rd century that the use of paper as a writing surface gradually started to spread. In Europe, medieval papermakers, aided immensely by the rise of water-powered paper mills, mechanized the paper production process and since then there’s been no looking back. Papermaking centres mushroomed across Europe, and many of which offered low price compared to that of parchment. In addition to being a superior printing surface and binding material, the cheap availability of paper paved the way for its mass use among bookmakers.

Movable-Type Printing: The inherent disadvantages of the laborious woodblock printing process forced Chinese inventor Bi Sheng, in the 11th century AD, to devise a system which would allow people to copy and print any writing using a set of formed ‘types’ that replicate characters in writing. This later came to be known as movable-type printing— a typographical system that enables one to reproduce written characters using movable components instead of static ones. The earliest types were made of clay and ceramic. The oldest existing book that was printed using this technique is the late-13th century Korean book called Jikji. The Gutenberg Press: The story goes that in mid-15th-century Germany, a young Johannes Gutenberg, down and out on his luck, was looking to repay the debts he had accrued, when he came across a screw press at a wine farm. That chance encounter would go on to change the history of book printing and publishing forever. The down-on-his-luck Gutenberg pitted his future on adapting this wine-making hydraulic press for the printing process and gave birth to a book-printing machine that could typeset, print and publish pages at an industrial scale economically. He also developed types made of an alloy of lead, tin and antimony, which were far more durable and practical than ceramic and clay ones, allowing one to rectify errors in a print, by resetting the specific type for the errant portion—something that was impossible when woodblocks were used. Within a few decades, Gutenberg’s invention spread across Europe. 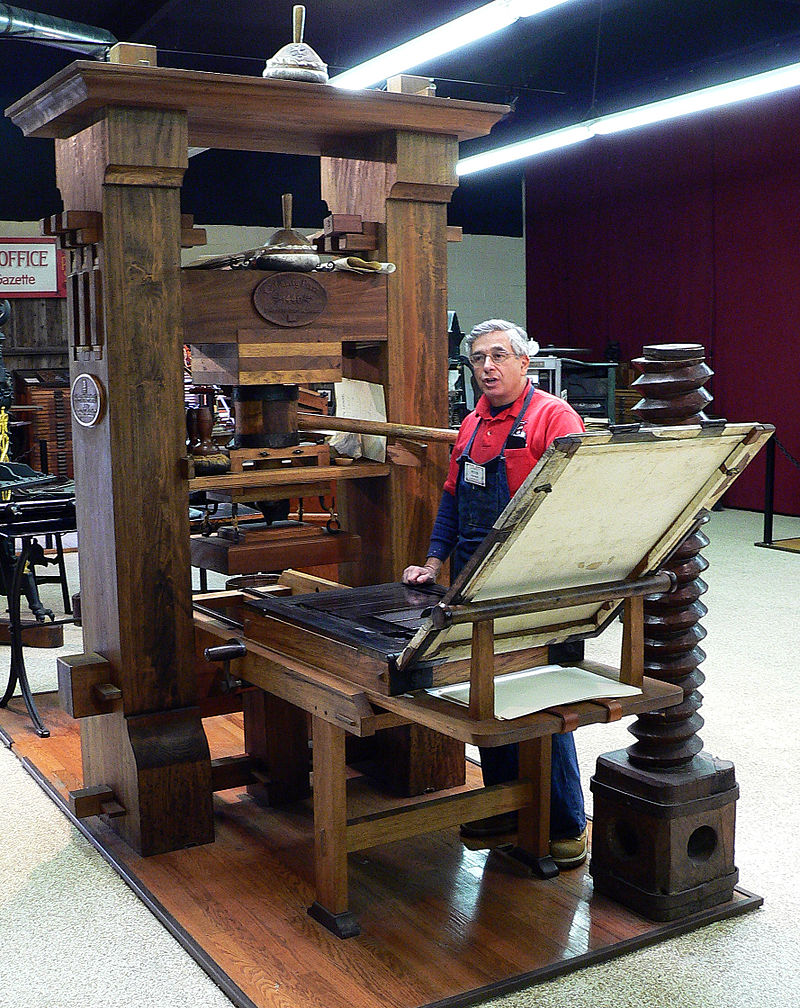 A recreation of the Gutenberg Press at the International Printing Museum, Carson, California (Photo: Wikimedia Commons)

The role of the Gutenberg press in revolutionizing the world can hardly be overstated. The Gutenberg Bible not only became a massive bestseller in Europe its popularity ensured that it would also mark the way books would, in future, disseminate knowledge and information around the world, besides influencing future editions of the Bible.

From the 20th century onwards, printing and publishing techniques changed and progressed by leaps and bounds—colour and 3D printing have played pivotal roles in not just a book’s appearance, but also its size, price, availability, and other facets that influence the global market. Add to this cauldron the advent of hypertext and the rise of e-books—and it’s a joy to behold how the written word has evolved since times ancient. One wonders what the next revolution in the book-printing and publishing would look like and how it will change the form of the book as we experience it today.