This is what I learnt when I joined EktuDeen, an initiative to stand by people pushed into poverty by the COVID lockdown 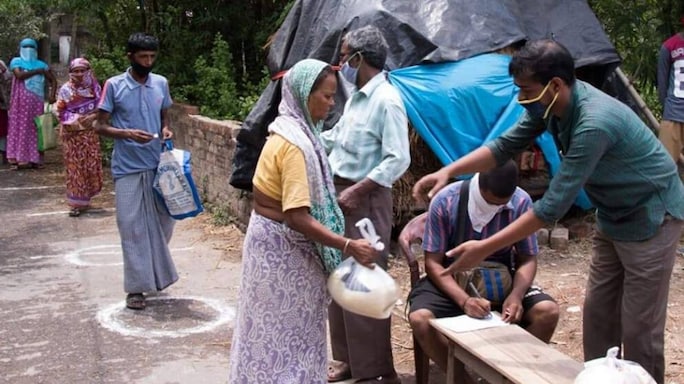 I am no stranger to poverty and hardship—having worked with slum kids to give them access to brighter surroundings to study—at least 4 hours of brightness before they go back to their grubby dark homes, lining the train tracks. And some fun and laughter, while at it.

When COVID-19 hit us, I wondered how the people I have known so well would cope. Take Namita, the homemaker in the wetlands, whose husband’s livelihood was snatched away, leaving her to feed her two little kids. Nemai, whose address was the streets near Kalighat, had no clue where his next meal would come from; Shefali, a sex worker, had to feed her aged parents, and kid, but from where?

Then of course, newspaper reports of the struggles of the helpless and deprived came at us in waves. Frustration, and the desire to do something, was killing me, but I knew I could not do anything alone.

Then one phone call from Aditi Roy Ghatak, my former News Editor in The Statesman, changed everything. My husband Biswajit and I suddenly found a purpose, and a way seemed to emerge soon enough to get help across to these desperate people.

To start with, we needed a shop, which would be able to supply the groceries we needed to distribute. Our local grocer, Bimal Shaw and his son, were willing to supply and pack the ration for us. This got us really excited, and now we had to look for a vehicle to transport them. We started off paying from our own pockets, hoping help would come in from friends and well-wishers. And it did! We learnt from our network of friends that the red light areas of the city—Sonagachhi and Kalighat—were hit very hard by the lockdown. Sonagachhi, Kolkata’s largest red-light district, houses nearly 10,000 sex workers. A local initially identified 250 of the most vulnerable families—aged people, small children who stared at an uncertain future as their source of income had dried out.

Meanwhile, a few young lawyers—Jamir Khan, Sayanti Sengupta and Advocate Shamim Ahmed—joined us on the ground and volunteered to deliver the food items. A photographer friend Ashim Dutta, accompanied them.

Biswajit and I got the orders readied and loaded the van. Each grocery packet consisted of 5 kilos of rice, lentils, atta, cooking oil, soap and biscuits.  When I saw photos of children and the families reaching out for the grocery later, I could not hold back tears. We had taken our first baby steps.

After this there was no stopping. We labelled this initiative #Givealittle or #EktuDeen. It was initially an effort at crowdsourcing—ideas were thrashed out on how to deliver relief, how and where to collect the funds to buy the provisions and medicines, information about the most vulnerable groups began pouring in—and our initiative began to grow rapidly. As we reached out on social media, volunteers came forward from across the world. They were our Shadow Warrior—silently reaching out with whatever they could spare for a fellow human.

Working from home, with almost no mobility, we kept raising funds, looking at messages to identify the needs, getting the grocer to ready the essentials, calling up friends for vehicles support, coordinating for the time and place for deliveries. A midnight call about a bunch of people near the Sunderbans got us worried: who would possibly be our contact there, who we could transfer funds to, someone we could rely on? We worked the phones and tried to tap into our network. The feeling of being able to reach out to so many in the end, when we thought we had hit a wall, inspired us to do more.

We were able to deliver ration to the remote areas of Garia, the wetlands, the Sunderbans, and covered as many ragpickers and people who lived on the streets—who had nowhere to turn to. We also reached out with support for workers stuck in other states.

All of this was just a drop in the ocean, but our friends, well-wishers, former colleagues, noticed our work and kept providing us aid and encouraged us to do more every day. The author has also worked with children at a slum school in Panchanantala, Kolkata. Photo: Indira Kanjilal

In Bengali, ‘ektu’ is a little. Just everybody contributing a little made us able to reach out to the desperately needy. If there’s been a reward, it’s the smiles on those tired faces heaving a sigh of relief to receive the provisions to tide them over at least for half a month.

We plan to continue our work—and there’s always so much to do. This time, it’s tarpaulins, for the thousands who lost their homes in the Sundarbans devastated by Amphan.

This isn’t about us at all, but somehow, our small journey has made me realize something—that to give you don’t need very much: just the will to do so and the determination to power through obstacles. But, above all, the belief that you can make a difference.