Eight Events That Grabbed The Headlines In 2019

From a terror attack to a counter offensive by India, a political landslide to a country in disarray over a new law, RD lists the defining events of 2019 Kicking Off the Year with a Quota

In the run-up to the general elections in 2019, the Modi government kicked off the pre-election sops early. One of the first steps in this direction was the 10 per cent reservation for economically backward upper castes in central government jobs. The cabinet approved it on 7 January 2019 and both houses of Parliament passed the proposal without much opposition. The new step, the government claimed, would benefit the economically backward among those castes that do not fall under the quota meant for the socially backward. Around 40 Central Reserve Police Force (CRPF) jawans lost their lives and dozens of others were injured in a terror attack in Jammu and Kashmir's Pulwama district on 14 February 2019.  Terror group Jaish-e-Mohammed claimed responsibility for the attack. A car full of explosives was driven into a convoy of vehicles that was heading from a  transit camp in Jammu and to Srinagar resulting in a huge blast. Prime Minister Narendra Modi vowed that the perpetrators of the terror attack would be punished and advocated “patience” to the public. In many ways, the attack set the tone for the rest of year. It only took twelve days for the Indian government to respond to the terror attack in Pulwama. On the early morning of 26 February, Indian Air Force (IAF) jets attacked a terror camp run by Jaish-e-Mohammed on the outskirts of Balakot town of the Khyber-Pakhtunkhwa province of Pakistan. According to the Indian government, several terrorists were killed in the attack. While there were celebrations across the country, Pakistan retaliated within a day, although no major damage was caused. Pakistan also claimed that it had shot down two Indian Air Force fighter planes, but later said that it had shot one aircraft and captured Wing Commander Abhinandan Varthaman within its jurisdiction. Tensions lasted for days before Wing Commander Varthaman was returned to India. The Balakot strikes were brought on by the Pulwama terror attack, but these were to resonate in the general elections due in a few months. Prime Minister Narendra Modi led the Bharatiya Janata Party to a landslide victory for a second term in office, leaving the Opposition dazed. The results were announced on 24 May. The mandate was huge with the BJP doing well in almost all the states across the country except for Punjab and Kerala. Even in West Bengal, where the BJP was not expected to make gains, it won 18 of the state’s 42 seats. Trinamool Congress was dragged down from 34 seats to 22 and the Left parties could not grab a single seat in their former stronghold. There were a thousand different analyses of the victory. But many agreed that the PM’s personal charisma and the Balakot strikes may have played a role in making the verdict decisive.

Yeddy: Back in the Saddle 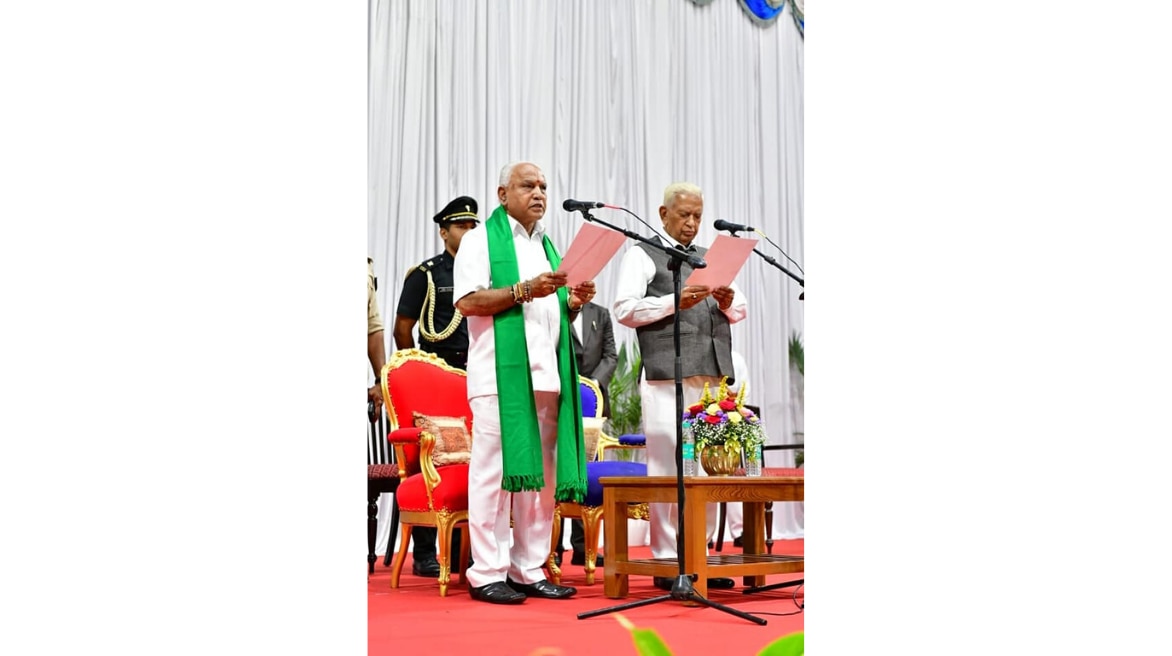 After some tumultuous months as coalition partners, the HD Kumaraswamy led Congress-JDS government in Karnataka collapsed, thanks to several members of legislative assembly (MLA) leaving the Congress. Within days of the government falling, the BJP leader B. S. Yeddyurappa, staked claim to form the government on 26 July. He was administered the oath of office on that day itself. The coalition partners alleged that the BJP was responsible for their MLAs deserting them. More recently, the Yeddyurappa government got a majority after a good performance in the by-polls. The BJP now has the majority of its own in the state. In a move that caught many unawares, the central government on 5 August announced that it was scrapping Article 370 of the Indian constitution, effectively stripping the state of the Jammu and Kashmir of its ‘special status’. Union home minister Amit Shah also said that the state wouldn’t exist any longer and that it would be split into two union territories. Soon after the announcement of the abrogation, the entire state was plunged into lockdown with several political leaders and separatists arrested. Telecommunication services were also badly affected as landline, mobile and internet services were shut for months. They were partially restored later.

Shiv Sena Forms Government, But Not with BJP Nobody saw it coming, but this happened. The BJP and Shiv Sena fought as allies in the Maharashtra state polls and won a majority together. But Shiv Sena dumped its partner of decades and joined hands with the losing parties, Congress and the Nationalist Congress Party (NCP), to form a government. On 28 November, Uddhav Bal Thackeray was sworn-in as the 18th chief minister of Maharashtra. This brought an end to weeks of political instability in the state, including the BJP trying to form a government with the help of a faction of the NCP. The 59-year-old Uddhav Thackeray is the first of his family to be the chief minister of Maharashtra. His late father Bal Thackeray founded the Shiv Sena. The NDA government led by the BJP easily passed the Citizenship Amendment Bill (CAB) on 11 December after a marathon debate in Parliament. The Lok Sabha had earlier passed it. It later got the President’s assent. The CAB provides citizenship to religious minorities--namely Hindus, Sikh, Jain, Buddhists, Parsis and Christians coming to India from Afghanistan, Pakistan and Bangladesh on or before December 31, 2014. The bill, and later the Act, triggered protests in various states in the Northeast and other parts of the country including several university campuses. The protests have already claimed 20 lives in Uttar Pradesh alone. The government that was claiming that the Citizenship Amendment Act (CAA) will be followed by the National Register of Citizens (NRC) has said it has no such plans and the two should not be linked. But a National Population Register (NPR) that the cabinet has cleared last week is seen as a precursor for NRC. The government has however denied any link between the two. Yet, much to the consternation of the ruling dispensation, the protests are continuing across the country on the CAA.

Do You Like This Story?
5
2
Other Stories
Please enter valid text
corona updates
Must Reads
Latest Issue