Crazy Little Thing Called Love: And I Love Her

Her parents insisted that she settle down with a man. She had just come out of a relationship with a woman 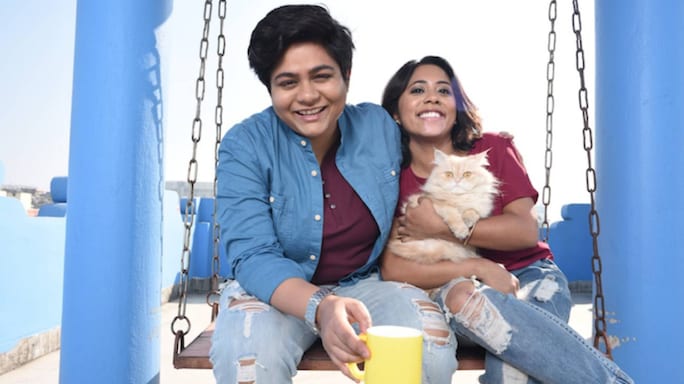 An overnight trip to Santiniketan in the scorching heat of May—that was our first date. It was the first time Suchandra and I met in person, and I knew right then—this is it.

We first connected online. I saw this pretty girl on a mutual friend’s Facebook page and instinctively pinged her. She responded and there was an instant connection. We didn’t meet each other until later, but I knew there was an undeniable chemistry between us. We talked about everything, for hours. Well, she spoke, and I mostly listened (laughs). She told me about her life, her past relationships, how nervous she was on her first date—she absent-mindedly brought home the napkin from the restaurant table! It was amazing listening to her. I knew I was falling in love.

During one of our conversations, Suchandra mentioned something—she was preparing a guest list for her wedding with a man; would I attend the event? At that point, there was no relationship—just this strong, intense attraction. Even so, the news was upsetting. I learnt that she had just come out of a relationship with a woman that ended in heartbreak. Her parents now insisted that she settle down with this man; reluctantly, she agreed. I was sure of how I felt, and sensed she felt the same, but I couldn’t say anything.

It was her life, her decision. But before parting ways after returning from Santiniketan, I hugged her and simply asked that she try to postpone her wedding, if possible.

Things took a different turn a few weeks later. Suchandra planned a staycation in the city. We booked a hotel room and spent a few days just being together, going about our day like a regular couple—a trial version of the life we could have. One evening, as we were hanging out at ‘home’, she suddenly stopped and said, “Hang on, I have to do something.” Then she called her fiancé and broke off the wedding, right there and then.

I love that about Suchandra—her courage; her guts to be totally transparent and honest with anyone. Also, she can be completely crazy! And she has a pathetic sense of humour, which I love.

With the wedding called off, we decided to move in together. Then came the tricky part—talking to her parents. Suchandra officially came out and her father asked us almost 50 questions, just like an interview—what I did for a living, what my intentions are with his daughter. We answered honestly, but it was difficult for them to accept us.

We moved in only two months after first getting in touch. So this was when we really grew in love—getting to know each other better, learning how the other feels and reacts. Every lesson deepened our connection. It’s been seven years now, and we still never run out of things to talk about. Amidst the love, there’s friendship. We spend a half-hour of ‘us-time’—me with my coffee, Suchandra with her Bournvita (yes, no joke!). It’s a deeply personal ritual: to connect at least once before we get busy with work and responsibilities. We argue differently now: there’s less ego and drama. Fights are very issue-specific, and once the issue is sorted, we move on! She complains that I never listen to her, which, of course, is a complete lie. See, she’s making faces at me now.

Before he passed away, my father told me: “Right now you’re 10, too young to think about love, but after 10 years, if you still feel the same way about women, we’ll talk about it and I promise we’ll understand.” His support gave me self-belief and self-love. My late mother was so happy when the Delhi High Court decriminalized homosexuality in 2009. Suchandra’s parents found it harder—her mother only conceded after two years of seeing us happy and committed; things are still rocky with her father. In 2015, Suchandra and I got married in a civil ceremony surrounded by our closest friends, but her parents didn’t attend.

Many same-sex couples face hate, even violence, but we have been fortunate. Barring some rude comments and stares, people have embraced us. I think we’re accepted because we are frank about ourselves. When you refuse to hide and admit freely who you are, no one has the power to corner you or gossip about you.

Suchandra’s mother hopes we adopt children soon, but for now we have a lovely four-legged baby—our Persian cat, Romeo. The adoption agency told us she was a tomcat, but the vet suggested we change the name because she was, in fact, a ‘Juliet’! For now, this ‘gender-fluid’ furball is a perfect fit to our family!

Sree Mukherjee (36) runs a start-up. Suchandra Das (34) is a photographer.

—As told to Ishani Nandi

Do You Like This Story?
0
2
Other Stories
Please enter valid text
Must Reads
Latest Issue