In light of the 2018 judgement on Section 377 of the Indian Penal Code, which made it clear that “social morality cannot violate the rights of even a single individual”, Reader’s Digest brings you a special Valentine’s Day feature 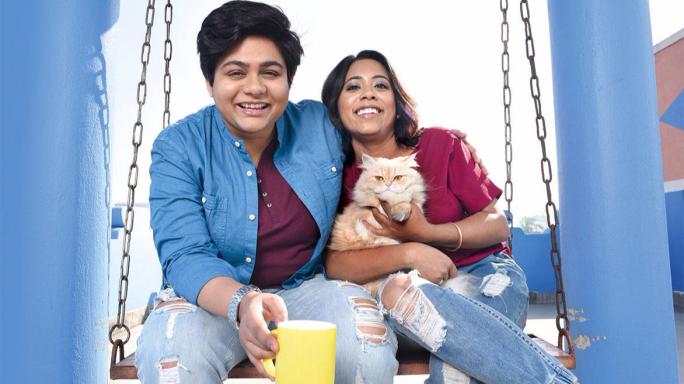 Sree (left) with Suchandra and their cat Romeo

And I Love Her

An overnight trip to Santiniketan in the scorching heat of May—that was our first date. It was the first time Suchandra and I met in person, and I knew right then—this is it.

We first connected online. I saw this pretty girl on a mutual friend’s Facebook page and instinctively pinged her. She responded and there was an instant connection. We didn’t meet each other until later, but I knew there was an undeniable chemistry between us. We talked about everything, for hours. Well, she spoke, and I mostly listened (laughs). She told me about her life, her past relationships, how nervous she was on her first date—she absent-mindedly brought home the napkin from the restaurant table! It was amazing listening to her. I knew I was falling in love.

During one of our conversations, Suchandra mentioned something—she was preparing a guest list for her wedding with a man; would I attend the event? At that point, there was no relationship—just this strong, intense attraction. Even so, the news was upsetting. I learnt that she had just come out of a relationship with a woman that ended in heartbreak. Her parents now insisted that she settle down with this man; reluctantly, she agreed. I was sure of how I felt, and sensed she felt the same, but I couldn’t say anything. It was her life, her decision. But before parting ways after returning from Santiniketan, I hugged her and simply asked that she try to postpone her wedding, if possible.

Things took a different turn a few weeks later. Suchandra planned a staycation in the city. We booked a hotel room and spent a few days just being together, going about our day like a regular couple—a trial version of the life we could have. One evening, as we were hanging out at ‘home’, she suddenly stopped and said, “Hang on, I have to do something.” Then she called her fiancé and broke off the wedding, right there and then.

I love that about Suchandra—her courage; her guts to be totally transparent and honest with anyone. Also, she can be completely crazy! And she has a pathetic sense of humour, which I love.

With the wedding called off, we decided to move in together. Then came the tricky part—talking to her parents. Suchandra officially came out and her father asked us almost 50 questions, just like an interview—what I did for a living, what my intentions are with his daughter. We answered honestly, but it was difficult for them to accept us.

We moved in only two months after first getting in touch. So this was when we really grew in love—getting to know each other better, learning how the other feels and reacts. Every lesson deepened our connection. It’s been seven years now, and we still never run out of things to talk about. Amidst the love, there’s friendship. We spend a half-hour of ‘us-time’—me with my coffee, Suchandra with her Bournvita (yes, no joke!). It’s a deeply personal ritual: to connect at least once before we get busy with work and responsibilities. We argue differently now: there’s less ego and drama. Fights are very issue-specific, and once the issue is sorted, we move on! She complains that I never listen to her, which, of course, is a complete lie. See, she’s making faces at me now.

Before he passed away, my father told me: “Right now you’re 10, too young to think about love, but after 10 years, if you still feel the same way about women, we’ll talk about it and I promise we’ll understand.” His support gave me self-belief and self-love. My late mother was so happy when the Delhi High Court decriminalized homosexuality in 2009. Suchandra’s parents found it harder—her mother only conceded after two years of seeing us happy and committed; things are still rocky with her father. In 2015, Suchandra and I got married in a civil ceremony surrounded by our closest friends, but her parents didn’t attend.

Many same-sex couples face hate, even violence, but we have been fortunate. Barring some rude comments and stares, people have embraced us. I think we’re accepted because we are frank about ourselves. When you refuse to hide and admit freely who you are, no one has the power to corner you or gossip about you.

Suchandra’s mother hopes we adopt children soon, but for now we have a lovely four-legged baby—our Persian cat, Romeo. The adoption agency told us she was a tomcat, but the vet suggested we change the name because she was, in fact, a ‘Juliet’! For now, this ‘gender-fluid’ furball is a perfect fit to our family!

Sree Mukherjee (35) runs a start-up. Suchandra Das (33) is a photographer.

—As told to Ishani Nandi 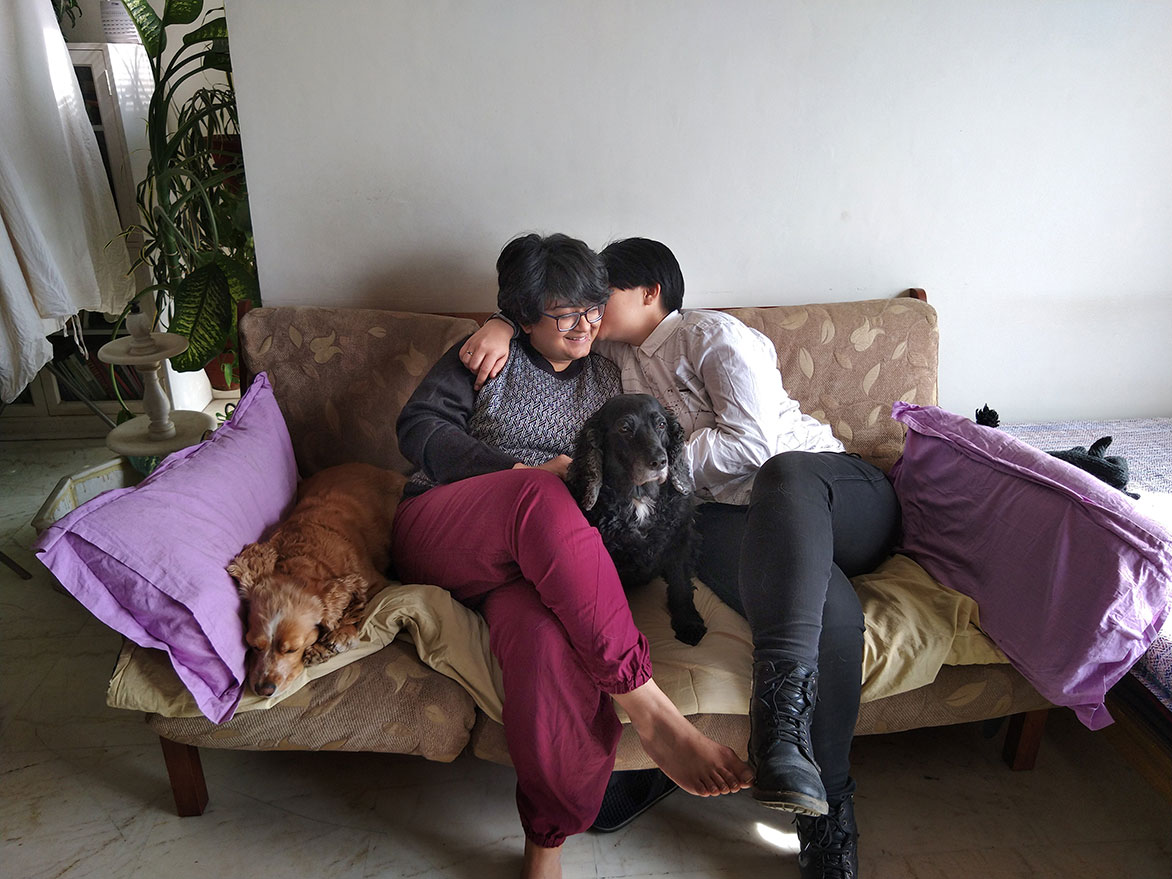 I first met Kiran* at a workshop for mental health counselling in 2016. For Kiran, it was love at first sight. For me, it started only as a happy coincidence—that day, we were the only queer persons in the session—me, an asexual woman, and Kiran, who then identified as lesbian. At the end of the workshop, out of curiosity, I chatted with them** on matters of mutual interest. For a few months after this, we talked over social media—about music, food, dogs and the subject of mental health. It started out the way it did with all of my platonic friendships.

But soon things began to change. Having spent my whole life with no interest in dating or relationships, I couldn’t understand what was happening and why I was so intensely drawn to this person. Once, Kiran instinctively held my hand in an effort to warm me while I lay beside them cold and shivering—the blanket having slid off me. For an instant, forgetting all, I hoped that moment would last forever.

After six months, in 2017, we started dating. We met during lunch and after office hours, and I began sleeping over at their house. When I informed my mother of this rather intimate relationship, she said she had known about it for months. The good news—she was very supportive, as were my close friends.

I now realize how fortunate we had been in gaining their support—it allowed us to proceed with our lives without fear. Honesty was always a cornerstone of our relationship—and talking heart-to-heart also took us in unprecedented directions. Kiran, for instance, started questioning binary gender roles and politics, and soon discovered their non-binary identity.

Starting out as awkward friends, we graduated to being awkward lovers. Currently, I think we are in what can only be described as a ‘grossly married’ phase—we live together and argue most of the time about who leaves their shoes lying around, or who forgets to turn on the water pump!

Sharing a home has increased my appreciation for the more mundane bits of our lives. Sometimes, I come across Kiran slicing vegetables in the kitchen, and something as simple as that makes me fall in love with them all over again. I have also realized that even though our relationship has come a long way (over two years now), we have much to work on if we are to carry it forward. While we have got the major issues sorted out (we see eye to eye on ideological matters and our perspectives have some similarity), we need to work on the minor issues that define our day-to-day lives. We still argue about the allocation of duties, and I still get irritated whenever Kiran tries to analyze me psychologically—something they do out of habit, as a psychotherapist.

I am extremely grateful to Kiran for the opportunity to explore a fulfilling relationship between contrasting individuals. For instance, I am given to bursts of passion and temper and I am vocal about what I believe in. Kiran is, on the other hand, calm, collected and  able to provide a balanced and nuanced perspective on things. While we share a lot of interests (so much so that we often joke that we are the same person) Kiran is almost my antithesis, but obviously in a complementary way.

One day, I sensed an irritated Kiran and immediately started worrying about our future. I went to their house tearfully asking why they were upset with me. Kiran’s reaction was one I hadn’t expected—they admitted that they were irritated with me, but that didn’t mean the end of it all. They reminded me that there was always the option of talking things out. Never before had I received such empathy—it was also the moment I realized our relationship had a future.

Empathy and humour are the two aspects that make our relationship stick through thick and thin. We revel in humour as it gives us a sense of comfort and helps us break from the stereotype of a technicolour romance, while also increasing our trust in each other. Empathy takes it a notch further. Our work often involves interacting with people from the LGBTQ community, many of whom share harrowing tales of discri-mination and oppression. While this may be depressing, it inspires us to work even harder for the betterment of the community. Right now, our goal is to keep doing the work we do, and we dream of building a life consisting of rescue dogs, evenings full of laughter and, in our own little way, making a safer happier world for other queer people like us.

Shambhavi Saxena is a journalist. She and Kiran are 25 years old.

**Kiran prefers the pronoun ‘they’ to reflect their non-binary identity.

—As told to Saptak Choudhury