Confined In A New York High-Rise, Watching The City And Its People

In a post-corona world it’s hard to recognize the city, but then some things never change 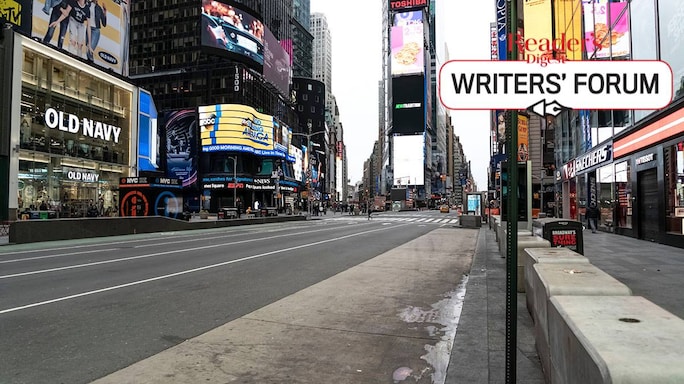 New York City feels like a ghost town, deprived of the movement, bustle and unabashed glamour that lends it a magnificence. The flowers in window boxes that would declare the arrival of spring in April are missing. The bagel and kebab carts, and the life around them, on the pavements of its long avenues are gone. There are only police patrol cars and the occasional masked pedestrian. A silent gloom hangs over its clamorous neighborhoods, reaching high up to the residences several floors above the ground.

Ever since I arrived here, I noticed in awe its position in the global networks of mobility, surging with travellers from across the globe. The cosmopolitanism that I came to acknowledge as New York’s signature trait, wasn’t just defined by the breadth of its pull: For me, it vitalized both the struggle and the thrill of living in New York and reshaped my inner world.

Confined to my ratty apartment in uptown Manhattan, this expansive imagination of the city I have come to call home, has transformed. Since late March the only sounds that have punctuated my time within my apartment have been ambulance sirens and helicopters, and the natural worry one feels when thinking about someone being rushed to their death in an ear-splitting vehicle.

As I write this, the city has crossed 11,800 deaths. In addition to this astounding figure is the New York Times’ estimate of more than 5,200 people who have died without being tested for the virus. The dot above NY on the ‘Cases’ maps is ominously large, like a seismographer’s alert to demonstrate the epicenter of a powerful earthquake. The city is paying for excelling at the one thing that enables the spread of infectious diseases— human mobility.

My once-a-fortnight runs to the grocery store have begun and ended in grim, masked queues extending into the next block. There is no conversation, no flirting and zero fashion visible. Standing in them, you gain a spot of inspiration from the empathetic nods from fellow shoppers. Most shoppers resist the urge to hoard items that everyone may need. So many of us are beginning to revive our common humanity in this otherwise compulsively egotistical city. As we stand six feet from each other near at the check-out counters, which now look like the glassy immigration kiosks at JFK, many shoppers cheer for governor Cuomo as his press conference flashes across the store’s TV. I can hear the lady in front of me saying through her cloth mask: “Thank god we have someone who can counter Trump’s insanity!”

On most other days I spend hours at home scrolling through Twitter, feeling an outrage when I see images of hundreds of migrant labourers in India walking to reach. My family and friends from India call often—it is always a relief to speak to someone from home, especially since we are experiencing morbid realities simultaneously. The worst affected everywhere are the poorest, immigrants, minorities, people who have no option but to work outdoors during such times. If anything, it is the vast inequality within the richest countries of the world, as much as the disparities in their response to this crisis, that is glaringly visible.

The viciously punctual schedules that Zoom-conferencing has enforced, on those of us privileged enough to work out of a laptop, is maddening. I climb up to the empty roof of my building and peer over the park towards the silvery, vertical Manhattan skyline. These enormous buildings once provided a distinctively cinematic endorsement to my life’s dreams. Now, I find myself yearning for the horizontal streets far below, instead.

There seem to be endless hours to rediscover myself, write and create art about the strangely secluded experience of the multiple crises around me. I want to call loved ones and pray for those who are sick or working through this pandemic. But how is one to do so without all the stimulation from strangers, acquaintances and manifest angels that one often meets in New York’s humming streets?

From my isolated vantage point, I silently cheer for the delivery folk zooming down empty streets on their electric bikes. There is an instant where I jealously cuss at the group of over 10 unmasked people who are visibly not social distancing in the park. The cherry blossoms down there have bloomed and look like bits of cotton candy from above. There are two couples soaking in April’s setting sun.

When I return to my apartment, I cook rice in the pressure cooker that has been merrily whistling through every meal cooked during the lockdown. When it is done, I drizzle a teaspoon of the ghee that my mum-in-law handed me when I left home to return to NYC. I sit by the window with my bowlful of ghee-rice and dial my mother’s number on WhatsApp. While waiting for her to pick up her phone, I look inside the apartments across the street and someone smiles back at me. That small moment of our pandemic-induced neighborliness becomes an undeniable refutation of my remonstrations of confinement. I know NYC will be back on its feet soon.

The author is a Teaching Fellow and Doctoral Candidate at Columbia University. She has been a resident in New York City since 2016.