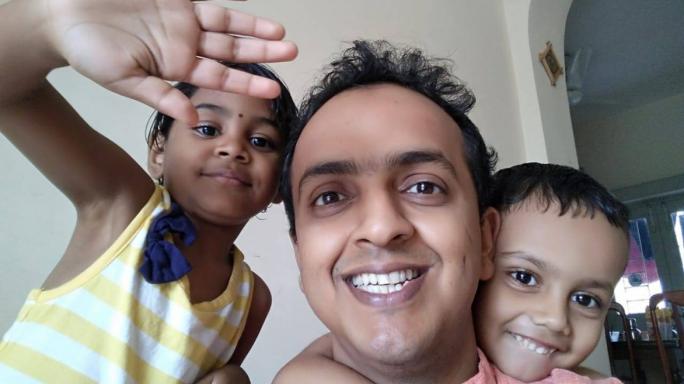 “When my son mentions that I prepared his lunch,” says Amit Awekar, Assistant Professor at IIT Guwahati, “His teacher isn’t quite sure how to react.”

Awekar is deeply involved with his children, often waking up at 5 am to help them get ready for school. He enjoys picking the best ingredients for the sandwiches he makes for them and likes preparing delicious snacks for their lunch boxes. However, he is often in the minority and like his son’s teacher, others are surprised by his active role.

“I am usually the only father at birthday parties,” he says, even though he and his wife work together to make decisions, plan, and organize the events of their children’s lives. He mentions, however, that he doesn’t like to preach to his children about equality. “They can learn by watching,” he says. Amit Awekar with his children Anjali and Maadhav

Fathers like Awekar are working against a number of factors that make it difficult for men and women to share parenting tasks equally. State of the World’s Fathers (SOWF), a global report on men’s contribution to parenting and care giving, says that social norms, workplace policies, and laws can come together and affect the distribution of caregiving.

For example, gender socialization can perpetuate the idea that unpaid caregiving must be done by women. The lack of paternity leave can force mothers to become primary caregivers.

For example, when Sid Balachandran’s wife returned to work after maternity leave, they were keen to have a parent stay at home with their son. It seemed natural for Sid to take a career break. He didn’t give it much thought initially, but over time, his unusual choice exposed him to the unequal expectations set by patriarchal social norms.

“My wife and I both knew that we were going to have to make some major adjustments to our careers,” explains Sid. “Having said that, I think women’s careers take a bigger hit after becoming a parent just because of the way our society perceives their role,” he adds.

Sid says that he realized the importance of setting the right example for his child. “As more fathers step up, more women will be able to pursue their career or at least have the choice.”

The SOWF recommends teaching all children the value of care work from an early age, and to see that care work is the responsibility of all, regardless of their gender. Modelling such positive behaviour for children can bring about deep change.

Ganesh Vancheeswaran, an entrepreneur and writer, has experienced this. He made a career switch because he wanted to give importance to his role as a father. “I was in high school when I visited a friend whose father was handling the home. I was impressed by the role reversal,” he says. Now, he challenges assumptions about gender roles openly. When his son’s friends are visiting, he is usually cooking or cleaning.

Vijay Nagaswami, psychiatrist and relationship consultant, who has authored many bestselling books on marriage in India, gives a ray of hope when he says that traditional role definitions are now giving way to fuzzier divisions of labour, especially in professional urbanized settings. “Both parents have definitive views on how children should be parented,” he says.

The SOWF report also states that economic and workplace realities also maintain a traditional division of labour within the home. When an office does not have space for young children, it is often the careers of women that are disproportionately affected.

Ayon Tarafdar, Associate Professor at the School of Planning and Architecture in Vijayawada, experienced this when he wanted to be a supportive partner to his wife. She needed to travel on work and their children needed an after-school space. Tarafdar had to create it for his children at his workplace. “I store sketchbooks and colours and puzzles in my office, and sometimes bring my children here after school.”

He is quick to add, though, that this won’t be possible in every office. “I wish it were the norm to have some space for kids,” he says. But his actions might already be having a ripple effect. “Some of my colleagues are following my example and encouraging their wives to travel. Perhaps they feel confident because have seen me with my children."

Hands-on fathers also tend to have a better understanding and appreciation of their partners’ responsibilities. For instance, Tarafdar enjoys his daily routine with his children and sees it as doing his part: “Getting my children ready for school, and encouraging them to eat their dinner is relaxing – especially after a long day in the office. And my wife does so much more”. Sharing the responsibility seems to have built a stronger bond between these parents.

Dr Nagaswami agrees: “As a rule of thumb, the fewer the conflicts, the greater the satisfaction between couples. Mothers now expect their partners to be more engaged in parenting chores—and rightly so. So when fathers are pulling their weight, the marriage also tends to be positively impacted.”

These fathers also appear to be deriving some benefits from their lifestyle choices, and finding opportunities for personal growth. Sid began to explore his creative side when he was at home with his young son. He started a blog about his fatherhood journey, which evolved into a career in content writing. “Being a parent altered my path but in an unexpectedly positive way. Truth be told, parenting has taught me a lot more than two degrees and 10 years of professional work.”

Others mention that their relationships have become deeper and more meaningful. “My wife and I have a sense of being on a team," says Awekar, “And I began to see my own parents differently. They have already done this with far less money and time.” Ganesh echoes a very similar sentiment when he says that anticipating his son’s needs has made him more empathetic towards others. “A child gives you access to parts of your personality that you didn’t even know existed,” he says.

Looks like more people are pushing the envelope on what fatherhood means and how it can affect their lives. And in the process, building happy, fulfilling lives – for themselves and their partners. We only hope many more dads take the cue and make this the norm rather than an interesting exception.

Life lessons from a stay-at-home dad

Who would have thought I’d be a stay-at-home dad? Least of all me. As an average Indian man, I was used to the household being run by my wife. I worked with the Future Group in a senior role, successfully handling their food business for Telangana, Andhra Pradesh, Tamil Nadu and Kerala. My wife managed the home and children. Life was pretty normal this way. It was when she decided to re-join her enterprise, Dirty Feet, in March 2017 that we decided to take a joint call on who will get to do the ‘home run’.

My wife and I always believed parenting should be an equal opportunity platform—where both the partners pitch in equally. So when the opportunity presented itself, I thought this was my chance to experience the everyday bliss and blisters of bringing up our little girls, something I had been missing out on until then. Chirag Mehta with his daughters

Our twin daughters, Iha and Arka, were just two and a half then. All of a sudden, I was alone at home to look after them. I had no clue where to begin, at first. My initial days as a stay-at-home dad were rough, to say the least,. It was the first time I was spending time at home all day, which in hindsight, terrified me more than the chores and responsibilities. It was also the first time I was interacting with my girls at a deeper level—beyond the ‘hello’ and ‘bye’, father-daughter chitchat and hug.

I always thought that being the breadwinner of the family was tough—you had to meet deadlines, work in a dynamic and competitive environment and constantly up your game. But nothing had prepared me for the real chaos that ensued being a full-time parent. I guess you don’t realize the trials and tribulations of a caregiver (mothers, in most cases), until you are actually in their shoes. The change was hard to adjust to, but what kept me going was the sheer joy of being with my daughters, participating in their everyday explorations, giggles and play-acts. I was reliving my own childhood through their antics.

Every day is a new learning with them around. I used to be an immensely restless and impatient person when I began my parenting journey. Being with Iha and Arka has taught me how to prioritize and multitask and has improved my decision-making capabilities. I learnt to let go of my own biases because I realized that children are intuitive and emulate their parents. I didn’t want them to grow up with prejudices, so I was careful not to pass on my own biases. I have taught Iha and Arka to never give up, no matter how hard the going gets, and my most treasured moment is when my daughters exhibit this never-say-die attitude. For instance, one day I was struggling to keep up with their play pace and was generally making a mess of it. They just walked up to me, looked me in the eye and said, “It's okay Papa, take your time. Just keep trying”. And my heart just filled with pride and joy. Today, the girls call me to take them to the washroom or for any important event in their lives, even though my wife is around. I think parenting should be hands-on, organic, slow and conscious. It’s about giving space, and time and empowering them our children to explore, experience, enjoy life, and move forth at their own pace. Our only priority should be to ensure that the child in them stays alive. Our daughters are now four and a half and are yet to face any kind of formal and structured environment. So here we are, content in our own chaotic and cosy world.

Chirag Mehra chronicles his experiences and learning on his blog mydaughtersandme.com