The cyclone brought devastation to this iconic street, detroying small book stalls. But many proud Kolkatans have jumped in to save it from ruin College Street or Boi Para (roughly translating to ‘the neighbourhood of books’), Kolkata's one-stop destination for books and an intellectual hub for the city's authors and bibliophiles down the years, now wears a deserted, desolate look. If the coronavirus lockdown brought the bustling place to a standstill, with business shutdown for almost two months, cyclone Amphan devastated it physically. Hundreds of shops were waterlogged and thousands of books destroyed, floating out into the street even days after the cyclone.

"The losses are staggering. I couldn't bear the scene of people weeping in front of their shops and picking up soggy books in thousands and shoving them aside," says Indrani Roy Mitra, who runs a large, well-known publishing house on College Street.

The scenes of devastation here, once the centre of the city's thriving reading culture, has touched a chord in people who may be living far and wide, but have a strong nostalgic bond with it and have always been part of its living heritage. Many proud Kolkatans⁠—from across India and around the world⁠—have expressed anguish and have jumped in to help turn things around. In fact, in the past few days, varied groups of people have started raising funds to help the beleaguered book stall owners, publishers, and others affected by the cyclone.

Mitra, in association with Kolkata Literary Meet (KLM), has been raising funds through Milaap, a crowdsourcing platform. The Publishers and Booksellers Guild of Kolkata, too, has launched a fund of its own, as have the students of Presidency University, a haloed institution on College Street, running a campaign to bring some relief to those affected.

"Boi Para has a special place in the heart of every Kolkata resident, past and present, who has been to this place. It is the many bookstalls and publishers that have made it into an iconic place. We cannot bear to see it lose its status. That was the overriding reason for launching our relief fund," says Mitra. Says Malavika R. Banerjee, director, KLM that has joined hands with Mitra in her efforts: "When we heard about this tragedy I immediately felt like doing something. We had an internal discussion. On the 23rd, I spoke to Indrani, and when I heard from her about this initiative, we wanted to contribute." Besides contributing money, KLM is urging people associated with it to come forward with their support. The online fund has already raised more than ₹10 lakh within a few days.

Banerjee believes this can be an opportunity for achieving greater things for College Street. "I interviewed Amitava Ghosh recently and he said that the storm has caused great destruction, but it is also an opportunity for regeneration. We should see this as an effort not only to rebuild the place but also enhance Boi Para to a higher level," Banerjee says.

Meanwhile, the Publishers and Booksellers Guild, Kolkata, has launched a relief fund of its own. The guild estimates that the total loss stands at more than ₹5 crore. "Since we are a registered organization boasting a membership of hundreds of publishers and booksellers, we are in a position to assess and identify the people who are in need of help," says Tridib Chatterjee of the Guild. He emphasizes that Boi Para will need help from other quarters too.

Many affected people are welcoming the efforts. "My shop was under three to four feet of water for two days. All the books that were kept at this height have been completely destroyed. There are hundreds like me who need help, and we need all the support that we can get,” says Ranjan Dutta, who runs Balaka Book Stall on College Street. 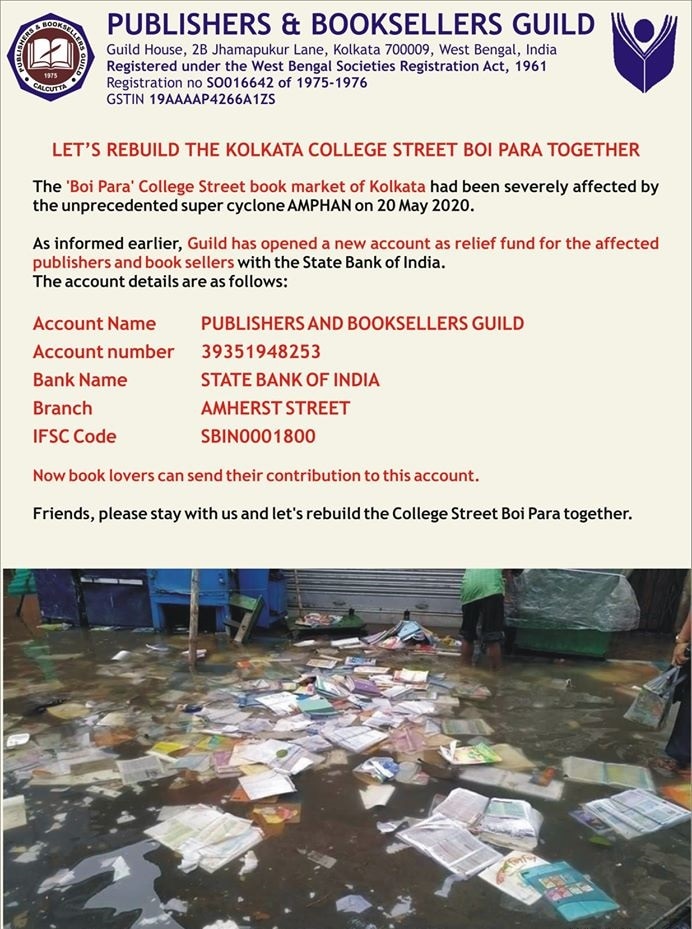 While Mitra and others hope to raise more than ₹25 lakh through crowdsourcing, the guild has contributed ₹5 lakh from its own budget. It has also appealed to the state government and non-government bodies to donate generously for the cause. Both the funds promise complete transparency in the disbursal of funds to the affected people.

For now Boi Para may be down, but there is hope in the horizon for its small publishers and booksellers. It seems the love for books and reading can build back what has been lost.

If you wish to donate to help the ailing booksellers and publishers of College Street, head over to this link.