At The Museum Of Memories Impressions of the underwater creatures my sister (Mugdha Agrawal), my mother (my mother) and me coloured together. Pic Courtsey: Author

In 2019, just before the pandemic broke out and all international travel came to a halt, my Singapore-based younger sister insisted my mother and I join her for the Christmas holidays. My mum, whom I’ve always perceived as a fearless woman, would get strangely nervous on flights, overwhelmed by the long-winded onboarding procedures and endless travelling hours. Perhaps the only thing that convinced her to overcome her fears was the fact that it would give us a much-needed chance to piece together our flailing bond, fraught by a galaxy of differences.

There was another highlight to the trip for my mom—a return to the place where she spent her honeymoon in 1989. Back then she was four months pregnant with me. Now, fast-forward 30 years, she would be walking down nostalgia lane with her now grown-up child. “I never imagined I'd ever revisit Singapore, let alone with you,” she remarked.

Growing up, moments with Mum were painfully short-lived because we spent most of the year at our boarding school in Darjeeling, reuniting only during the holidays. Every year, she would eagerly await our return, which would always lead to a deluge of pampering the likes of which we missed sorely while away. I remember chilly days when she would smear us all over with good ol’ Figaro olive oil as we basked gleefully in the warm, mellow, winter sun. Afterwards, there would be a solid scrub down with powdered wheat husk and a hot bath that soaked her as much as it did us. Looking back, these motherly pampering and indulgences replaced other, more conventional expressions of affection. Instead of hugs, kisses, or ‘I love yous’, we wrapped ourselves in wellness regimens and bouts of TLC over and over again. 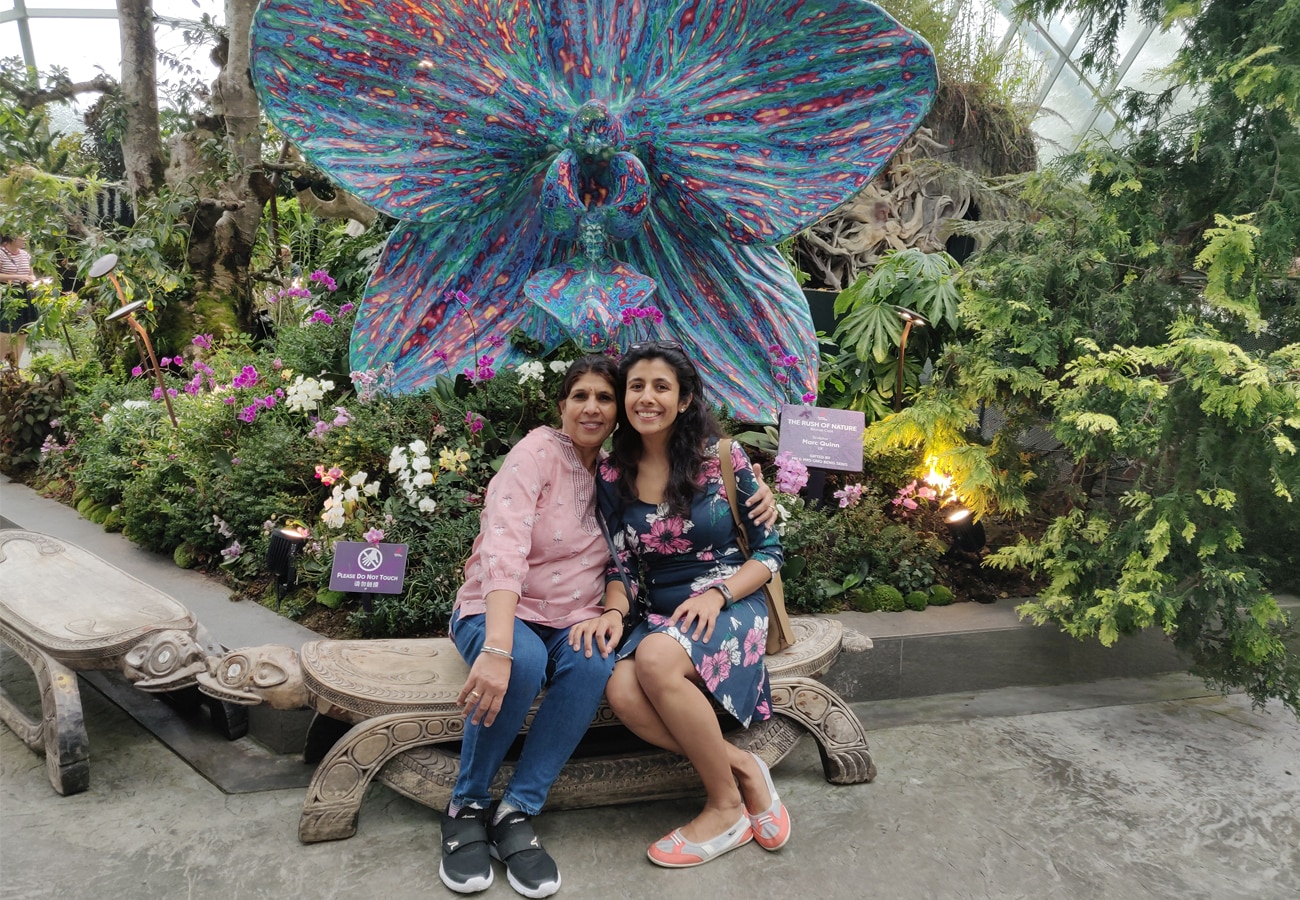 My mother and me during our visit to Singapore in 2019.

Mum never regaled us with stories from her own childhood in detail. “I lost my mother when I was barely one and a half years old. I would search for her in the bathrooms to check if she was hiding there,” she recalled, misty-eyed. When I first heard this, I felt a twinge that was hard to name: what do you call the feeling of building with your children a world of affection that you had only ever dreamt of?

Those sweet, cherished moments gradually waned as I grew older and moved further away from home for higher studies. Soon, our relationship became unusual, strained. Weekly phone calls filled with small talk were too rushed and perfunctory to ever mature into real talk, real feelings. The tension led to arguments instead. To me, she seemed unable to comprehend that I was no longer a kid. Her stubborn, rigid points of view and old-fashioned advice on righteousness ignited the rebel in me, forcing me to hold back information or even lie frequently. But the more I pulled away, the more I felt an emptiness, a longing for the bond that had grown so dim. Perhaps Singapore would give us a chance to breathe it back to life.

I assumed the immersive exhibits at the famed Art Science Museum would rejuvenate my mother, who was an art student. I was surprised, then, when she said “A lotus blooms in the muck,” without pausing to admire the Bruges Whale, put together using plastic waste to raise awareness about ocean pollution. “It's strange for a piece like this to be installed in such a gorgeous setting,” she added. 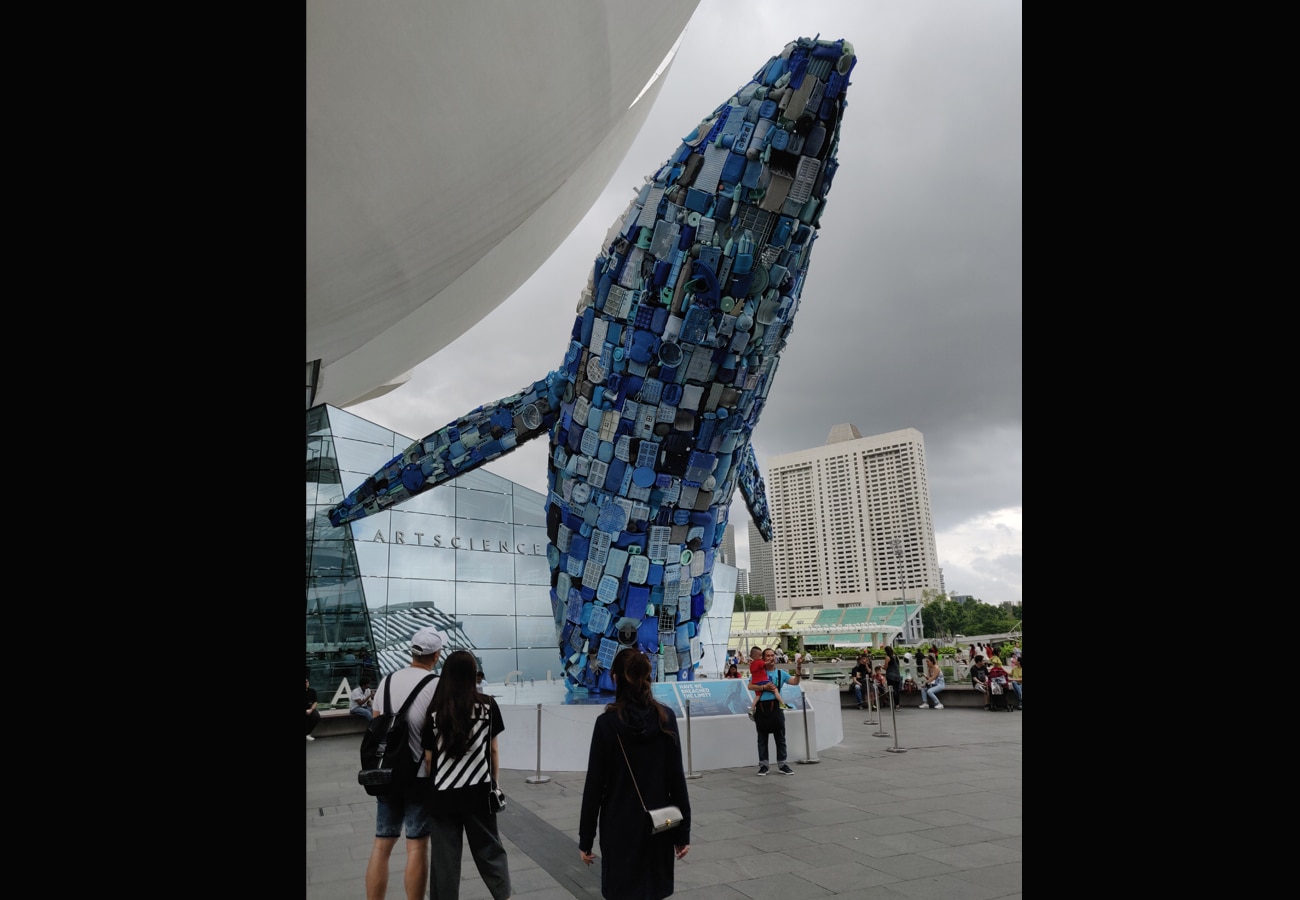 Bruges Whale on display at the Arts Science Museum, Singapore, in 2019

“It’s art, Mum! You have to be more appreciative of it,” I defended. Her critique seemed to reinforce just how different we were. Disappointed, and disheartened by the reminder of the space between us, I led her to the kid's zone, calming myself down and trying not to let my hopes for a renewed bond sink. Looking for a leveller to ease things, we signed up for a joint sketching activity. Secretly, I hoped producing something together would help us connect. As our creative juices flowed, our faded relationship began to take on the hues and shades of something sincere and beautiful. 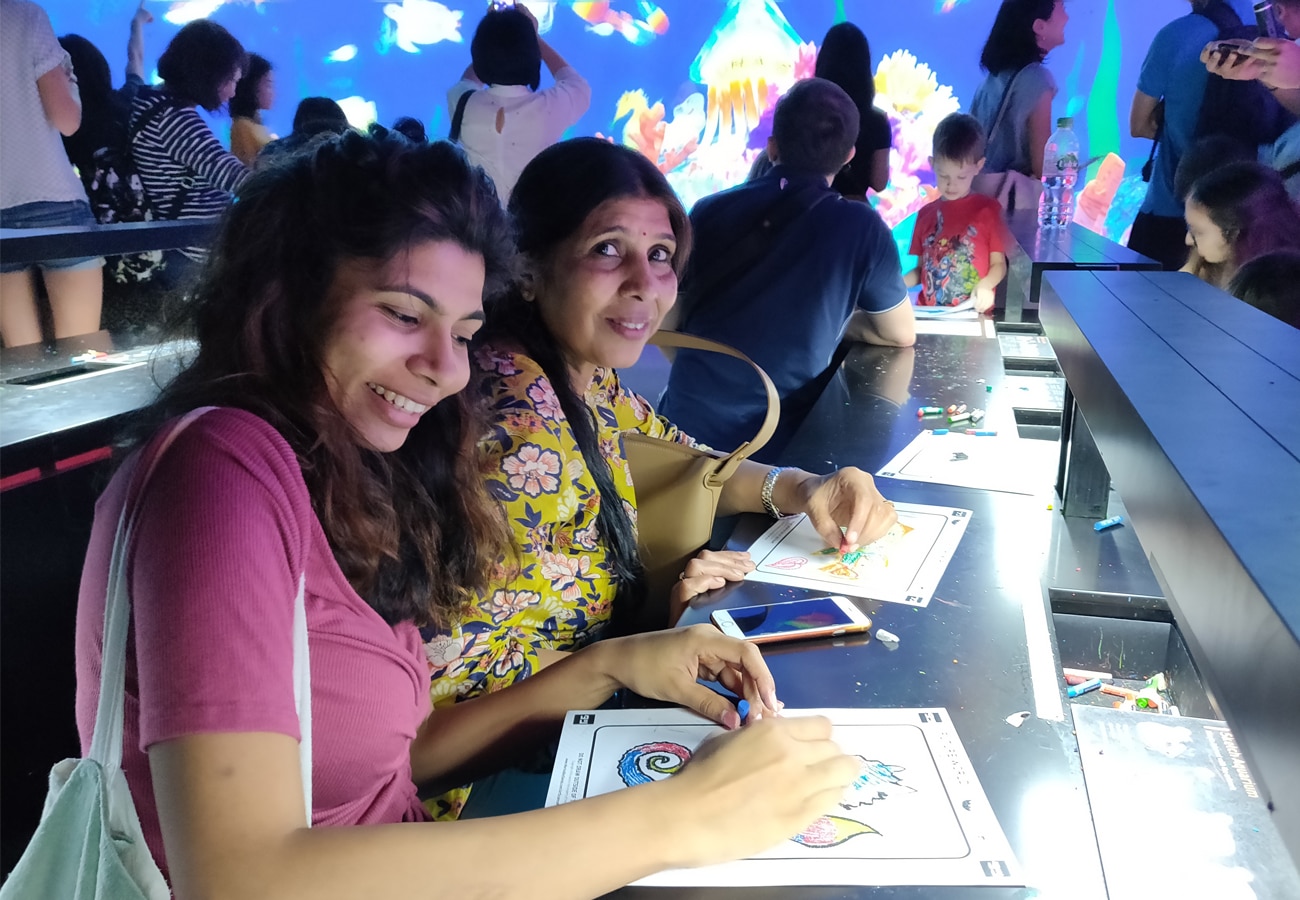 My sister and my mother immersed in the colouring activity

“Look there!” she said excitedly, pointing towards a digital screen that displayed our creations. “That one’s ours.” The fish we had drawn, with its big black eyes against lemon-yellow scales, was emblazoned with our names—our family of four. Her eyes filled with a distant look, Mum went up to the screen and reached out, touching the fish as if doing so would bring it to life. We watched as it flexed its tail back and forth, propelling itself into the crowded virtual tank. My mother points at our creation on the digital aquarium.

Looking around the arena, I saw other children sharing moments with their parents, and my own childhood flashed before my eyes. That momentary glimpse of my mother’s childlike curiosity, that rare instance where she let slip an inner innocence and delight at a new experience revealed the little girl in her, who like me, had lost a vital connection to the trials and responsibilities of adulthood and motherhood. “Our time together was like that of friends," she remarks, as we look back on our trip. "You were my mother, and I a child who followed you around.” Life had indeed come full circle.