At Home in a Shrinking Wilderness

A famed author-naturalist on the creeping effects of climate change. 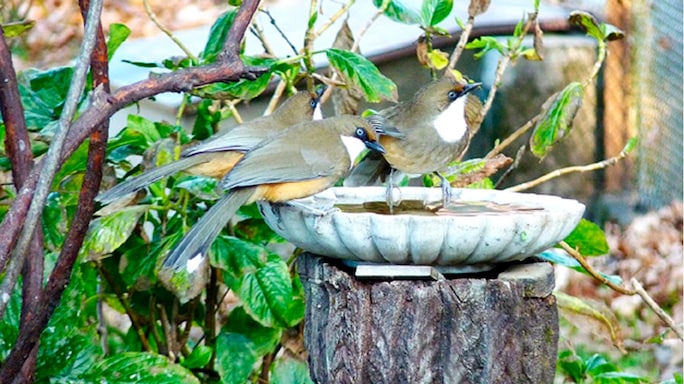 A flock of white-throated laughing thrushes arrive at the birdbath in our garden for their morning ablutions, splashing about with a flutter of wings. On a bush nearby, a pair of rufous sibias await their turn while a hunting party of tits, warblers and nuthatches search for insects in the branches, leaves and bark of maples, rhododendrons and oaks. Langur monkeys lurk in the trees above waiting for me to step back indoors so that they can raid the beds of nasturtiums and other edible flowers.

Overhead, griffon vultures and crested serpent eagles wheel about in the sky as a pair of yellow-throated martens slip through the underbrush at the edge of the yard, searching for eggs, fledglings and mice.

I am fortunate to have a home in the hill station of Mussoorie, where I can experience and enjoy the natural world, even if it is increasingly threatened by environmental degradation, climate change and pollution. The dense forests, steep grasslands and free-flowing rivers that I remember as a boy, growing up in these Himalayan foothills, seem to be shrinking every day.

Conservationists use the term ‘habitat compression’ to describe the increasing pressure of human activity and pollution that endangers wild places. For me it is a very personal reality, as I find myself retreating into our garden and the few remaining acres of forest surrounding our house.

Many of the mountain paths I used to walk less than 20 years ago have been widened into motor roads. Almost every level patch of ground along these routes is now the site of a makeshift settlement or Maggi Point, often illegally constructed, with no consideration for the natural environment.

Of course, people in remote areas of the mountains need access to markets, medical care and education, which roads provide. Yet, the jeeps carrying passengers and produce from villages to towns also bring with them a number of unwelcome consequences from erosion and deforestation to exploitative property agents, who speculate on the value of agricultural land, buying up fields from subsistence farmers and selling them to wealthy clients from the plains who want to build holiday homes in the hills. Though I cannot begrudge villagers an opportunity to break out of the poverty and isolation of rural life, the incursion of poorly planned construction adds scars to the mountains and puts pressure on limited resources, especially water.

The loss of natural habitat for wild mammals, birds, reptiles and insects, reduces the diversity of species and cuts off migration routes, as well as access to food and water. This pressure is not just from human beings but also invasive or exotic plants that crowd out less resilient indigenous species. Even when I was growing up in these mountains, 50 years ago, no true wilderness areas existed near Mussoorie, unaffected by our human presence. But now, even the most denuded and fragmented forests are threatened.

Being a longtime resident, I am often asked if I have observed any evidence of climate change during my lifetime. It’s a difficult question to answer because there are so many factors at play, and environmental changes are never isolated events. The one example I often give is that certain species seem to have moved up to higher altitudes in recent years. The black kite is a common bird of prey on the plains, scavenging near rubbish heaps in cities like Delhi or Dehradun. Until two decades ago, I don’t recall seeing the distinctive notched tail and dark brown silhouette of this graceful raptor circling over Mussoorie, but it has now become a familiar sight. Perhaps a rise in average temperatures may be responsible or, simply, a greater availability of garbage strewn about the town. Whatever the reasons, human beings have caused shifts in behaviour and distribution of birds and animals.

Another apparent symptom of climate change is an increase in forest fires throughout the lower Himalayas. This is probably connected to decreasing levels of humidity, reduced rainfall and warmer temperatures. Whenever the forests ignite, during the dry months of spring and summer, the first hint of danger we get is the scent of charred leaves in the air. From the edge of our yard, I can see dark skeins of smoke unraveling into the sky and advancing ribbons of fire at night. Chir pine forests on the surrounding slopes are usually the first to catch because of dry needles and pinecones that act as kindling. These trees, planted by the forest department during the last century as a source of revenue, have flourished, taking over large areas of the mountains that were once covered with grass. The wildfires add to a feeling of being besieged with a suffocating haze of smoke.

It is important to remember that almost every fire is lit by human beings. Often, villagers burn off old grass, hoping for an abundant supply of fresh fodder during the monsoon, and the fire spreads out of control. Sometimes, a carelessly discarded cigarette or bidi is responsible. I have even seen tourists starting fires intentionally for their own amusement. On rare occasions, lightning strikes can set a forest ablaze though I’m not aware of this happening in the Himalaya where thunderstorms are accompanied by rain or hail, which would douse the flames.

During the past three years, several ancient deodar and cypress trees near our home have been struck by lightning. More than a century old, they stood taller than any of the other trees nearby, but in a brief flash, lasting no more than a second or two, their massive trunks were splintered, as if by a giant axe. Dismembered branches were tossed aside, while long strips of bark peeled off as a powerful current of electrostatic energy surged through each tree. The blinding, white bursts of light were accompanied by explosions so loud they made the thick masonry walls of our house tremble. For several months after these strikes, the trees struggled to survive but eventually their green needles turned brown and they became skeletons of their former selves. As a writer and naturalist, I’ve often puzzled over our impulse and motives for conservation, which is, at heart, a struggle against change, or at least those changes in the natural world that human beings have set in motion. It also comes from a desire and longing to restore denuded landscapes to their original state. As a species we may have dominated the earth but we are still subject to the laws of physics and the evolutionary imperatives of biology. That’s why we need to be deeply concerned about something as apocalyptic as climate change as well as habitat compression. These days, as wild spaces shrink and disappear, I feel as if the man-made world is closing in around me.

Increasingly, it is obvious that our future as a species depends less upon human enterprise or industry and more upon accepting our responsibility for the pace and scope of environmental change—both global and local. We are an integral part of the earth’s complex diversity and the urge to conserve nature is not just an altruistic ideal but also a practical and instinctual strategy for our own survival.

Stephen Alter is the author of more than twenty books, including Wild Himalaya: A Natural History of the Greatest Mountain Range on Earth.