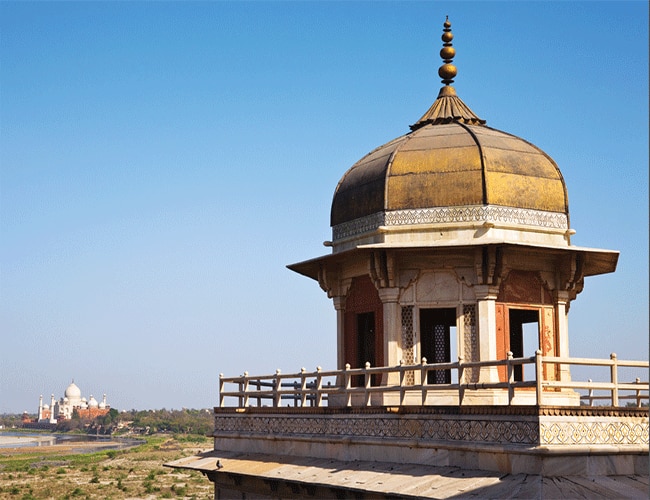 All my life I've wanted to travel on the Darjeeling Himalayan Railway (DHR), one among the three Mountain Railways of India, a UNESCO World Heritage site. I have read so much about the toy train's Batasia Loop, a tricky passage spiralling down to a lower gradient, that I feel I've actually been on it. Last year, during the agitation in Darjeeling, the DHR was damaged, leading to fears that it might lose its World Heritage site status. This should remind us about the importance of treating our heritage sites with care.

To get a spot on the coveted list is not easy. There are 10 broad criteria but that's just the outline. There is a 300-page docket defining the operational guidelines of what finally makes it to the list. The status is coveted as it not only means that the UNESCO helps protect these heritage monuments and sites, but also that tourism gets a huge boost, as people from the world over travel especially to witness the chosen marvel. India has 36 heritage sites so far, and here are five of them that you must visit soon.

When it comes to Uttar Pradesh, the star is definitely the Taj Mahal, on the checklist of every traveller. But sitting quietly in its neighbourhood is the Red Fort, also known as Agra Fort, a monument to Akbar's great sense of aesthetics, which does not get the attention it deserves. One of my earliest memories is of standing on one of the fort's terraces from where you can see the Taj Mahal in the distance.

The legend goes that Shah Jahan, who added his bit to the fort by building marble palaces, was imprisoned here until his final days by his son Aurangzeb. The broken, tragic Mughal wrote from a room in the fort with the Taj Mahal always in view. I could imagine the whole scene, described by local guides, play out in front of me -- a forlorn Shah Jahan, deprived of power but in all his finery, grieving for his begum and coming to terms with his son's treachery, soothed only by the sight of the Taj Mahal. For me, history has never come to life like it does at the Agra Fort.

Built by Akbar over eight years, from 1565-1573, Agra Fort was declared a World Heritage site in 1983 in category III: "to bear a unique or at least exceptional testimony to a cultural tradition or to a civilization which is living or which has disappeared". Indeed, to be alive in the time of Akbar was to witness a great cultural tradition, one that, hopefully, will not disappear from our country anytime soon.

A sprawling monument in red sandstone, Agra Fort is a fine example of Mughal architecture. The fort's walls spread over 2.5 km, and soar up to 21.4 m in height. Within, they hide 94 acres covered with many beautiful palaces, including Jahangir's Palace, halls such as the Sheesh Mahal, decorated with mirrors from wall to ceiling, several vast courtyards and two mosques -- in fact, Agra Fort is often, aptly, described as a walled city.

On a clear winter day, as you walk through its courtyards and explore its vast premises, you can feel the palpable history resonating through its walls. Emperors, like Akbar, Jahangir and Shah Jahan, built the fort bit by bit and their greatness lives on with the Agra Fort.

As you drive along the scenic Coromandel Coast, along the Bay of Bengal, just about an hour out of Chennai, you come to the pretty seaside town of Mahabalipuram, popular with weekend tourists from Tamil Nadu's capital. Named after the legend of Lord Vishnu defeating the demon king Mahabali, the town's name was later changed to Mamallapuram in the seventh century by the Pallava king Narsimhavarman I, who went by the title of Mamallan, or the great wrestler. However, the town is still better known by its original name.

Sea and sand are Mahabalipuram's modern-day attractions, but the biggest draw for the traveller is the intricately carved rock-cut sanctuaries dating back to the seventh century. Built during the reign of the mighty Pallava kings, known to offer patronage to the arts, the rock carvings and monuments here are often referred to as the world's largest open-air museum of rock relief. Among them, the most notable is the large 'Descent of the Ganges', measuring 96 × 43 ft, and depicting the myth of Bhagirath leading the holy river Ganga to earth. Carved on two boulders, the details will take you hours to absorb. Thousands of sculptures and temples sing homage to Lord Shiva, among which is the Shore Temple, called so as it is located on the shores of the Bay of Bengal. Carved out of dressed stone and granite, the temple was built by Narsimhavarman II in the eighth century, and rises 60 ft high, casting its shadow on the sea. A classic example of Dravidian style of architecture, a bas-relief [a kind of carving where the shapes are slightly raised from a flat background] panel inside the temple depicts Shiva's family, with Parvati and son Karthikeya. Apart from these two, another important feature at this site is the cluster of five chariot temples, known as the Pancha Rathas, each named after the Pandavas, carved out of a single rock. The group of monuments at Mahabalipuram was enlisted in the UNESCO's list in 1984 under categories I, II, III and VI, and remains one of the most beautiful architectural marvels of southern India.

Located 10 km from Mumbai on the Elephanta Island, and accessed by a ferry from the Gateway of India, this cave city is a mysterious and beautiful world full of rock paintings, carvings and inscriptions believed to date as far back as the fifth century.

Declared a UNESCO World Heritage site under categories I and III in 1987, Elephanta is a network of sculpted caves divided into two groups: western and eastern, or Hindu and Buddhist caves. The origin of the caves is still a matter of debate -- legends credit the Pandavas and Bansura, a demon devotee of Shiva, with the construction, and, while art historians believe these caves date between the fifth and sixth centuries, there is no official date or attribution. Some locals believe that these caves were not sculpted by man at all, that they are a natural wonder sculpted by time itself.

Whoever dug out these cave sanctuaries was an artistic genius, a fact evident in the intricate carvings, sculptures and the remains of rock paintings inside the caves. The two islands of Elephanta are divided by a ravine, with five rock-cut temples in the western hill and a Buddhist stupa on the eastern hill. Cave 1, in the western hill, is identified as the most important site. It houses the 'Sadashiva', also known as the 'Trimurti', the 7 m high masterpiece in stone dedicated to Lord Shiva, depicting Shiva's three avatars: the Creator (Brahma), Preserver (Vishnu) and Destroyer (Mahesh).

Together, the caves in the western and eastern hills, cut out of solid basalt rock, represent an important developmental phase of rock-cut architecture, which earned their place on the World Heritage list.

One of the most famous monuments in India, the Sun Temple of Konark, located near the shores of the Bay of Bengal, is a fascinating study in Kalinga temple architecture. An ode to the sun god Surya, this stone monument is shaped like a chariot driving Surya across the heavens, featuring 24 giant pairs of wheels driven by seven horses. Built in the 13th century by king Narashimhadeva I of the Ganga dynasty, the chariot and its wheels are intricately carved and, though much of the temple now lies in ruin (thanks to its proximity to the sea), you can still admire the stone carvings and the sheer scale of the structure.

Poetry in stone, the structural flow of the temple depicting a chariot in motion is admired by architects and art historians the world over -- its exquisiteness enhanced by the natural beauty that surrounds it, the swaying casuarinas lending the monument more fluidity.

Considered a creative masterpiece both in concept and execution, it was declared a UNESCO World Heritage site in the categories I, III and VI. Of the many unique features of the monument, perhaps the most remarkable are those depicting daily life, as well as motifs illustrating changing seasons. The wheels have a 3 m diameter, the scale unimaginable if you haven't seen the structure, and the plinth is full of carvings of people in different moods -- dancing, singing, merrymaking (and even in erotic postures). Completed over a period of 12 years, using over a thousand artisans, the Sun Temple is a reflection of the Ganga dynasty's power and prowess -- a reminder of the many rich layers of history that went into the making of India.

Today, there is much more to draw the traveller to Konark: The Chandrabhaga beach is the site for an international sand art festival in December, while the temple itself hosts the world-famous Konark Dance Festival, a celebration of all forms of classical dance, every February.

The newest World Heritage site in India, declared by UNESCO in the categories IV and VI, which deal with outstanding architecture and sites that represent living traditions, the ruins of the ancient Nalanda Mahavihara, or Nalanda University, have long been a revered site for historians and archaeologists.

The oldest university in the Indian subcontinent, the site of this monastic institution of learning is strewn with architectural gems such as viharas (Buddhist residences and education centres), stupas, shrines and artworks in stucco, stone and metal. It is believed that Nalanda was a centre of learning for over 800 uninterrupted years, and its excellence as an institute for Buddhist education was recorded in detail by none other than Hiuen Tsang, the Chinese traveller who visited it in the seventh century. Recent excavations revealed entire structures made of red brick, rising in rows around a courtyard. In Vihara 1, you can even see a raised podium from where teachers would've once addressed the students, and a semi-intact statue of Lord Buddha. Often claimed to be the first residential college in the world, with students coming in from Buddhist countries, like Japan, China and Korea, Nalanda was under the patronage of the Gupta kings and had over 2,000 teachers and 10,000 students at its peak. Built in the old Kushan architectural style, the remains of the Nalanda Mahavihara speak of a golden era of learning and education, and emphasize how Buddhism is an intricate part of the country's religious fabric.