A String Of Blue Beads

The most precious gift to give or receive is love 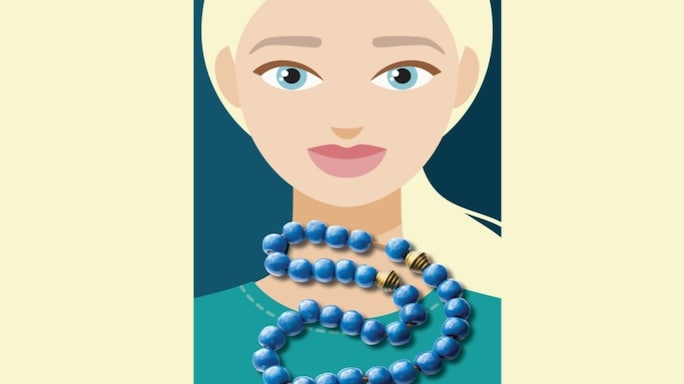 Pete Richards was the loneliest man in town on the day Jean Grace opened his door. You may have seen something in the newspapers about the incident at the time it happened, although neither his name nor hers was published, nor was the full story told as I tell it here.

Pete’s shop had come down to him from his grandfather. The little front window was strewn with a disarray of old-fashioned things: bracelets and lockets worn a century ago, gold rings and silver boxes, images of jade and ivory, porcelain figurines.

On this winter’s afternoon a child was standing there, her forehead against the glass, earnest and enormous eyes studying each discarded treasure, as if she were looking for something quite special.Finally she straightened up with a satisfied air and entered the store.

The shadowy interior of Pete Richards’ establishment was even more cluttered than his show window. Shelves were stacked with jewel caskets, duelling pistols, clocks and lamps and the floor was heaped with andirons and mandolins and things hard to find a name for.

Behind the counter stood Pete himself, a man not more than 30, but with hair already turning grey. There was a bleak air about him as he looked at the small customer who flattened her ungloved hands on the counter.

“Mister,” she began, “would you please let me look at that string of blue beads in the window?” Pete parted the draperies and lifted out a necklace.The turquoise stones gleamed brightly against the pallor of his palm as he spread the ornament before her.

“They’re just perfect,” said the child, entirely to herself. “Will you wrap them up pretty for me, please?”Pete studied her with a stony air.“Are you buying these for someone?" "They’re for my big sister. She takes care of me. You see, this will be the first Christmas since mother died. I've been looking for the most wonderful present for my sister.”

“How much money do you have?”asked Pete warily.

She had been busily untying the knots in a handkerchief and now she poured out a handful of pennies on the counter.

“I emptied my bank,” she explained simply.

Pete Richards looked at her thoughtfully. Then he carefully drew back the necklace. The price tag was visible to him but not her. How could he tell her? The trusting look of her blue eyes smote him like the pain of an old wound.

“Just a minute,” he said, and turned towards the back of the store.Over his shoulder he called, “What’syour name?” He was very busy about something.

“Jean Grace.”When Pete turned to where Jean Grace waited, a package lay in his hand, wrapped in scarlet paper and tied with a bow of green ribbon.“There you are,” he said shortly.“Don’t lose it on the way home.”

She smiled happily at him over her shoulder as she ran out of the door. Through the window he watched her go, while desolation flooded his thoughts. Something about Jean Grace and her string of beads had stirred him to depths of a grief that would not stay buried. The child’s hair was wheat yellow,her eyes sea blue, and once upon a time, not long before, Pete had been in love with a girl with hair of that same yellow and eyes just as blue.And the turquoise necklace was to have been hers.

But there had come a rainy night—a truck skidding on a slippery road—and the life was crushed out of his dream.Since then Pete Richards had lived too much with his grief in solitude. He was politely attentive to customers,but after business hours his world seemed irrevocably empty. He was trying to forget in a self-pitying haze that deepened day by day.The blue eyes of Jean Grace jolted him into acute remembrance of what he had lost. The pain of it made him recoil from the exuberance of holiday shoppers.

During the next 10 days trade was brisk; chattering women swarmed in,fingering trinkets, trying to bargain.When the last customer had gone, late on Christmas Eve, he sighed with relief. Itwas over for anotheryear. But for Pete Richards the night was not quite over.The door opened and a young woman hurried in. With an in-explicable start, he realized that she looked familiar, yet he could not remember when or where he had seen her before. Her hair was golden yellow and her large eyes were blue. Without speaking, she drew from her purse a package loosely unwrapped in its red paper, a bow of green ribbon with it.Presently the string of blue beads lay gleaming again before him.

“Did this come from your shop?” she asked. Pete raised his eyes to hers and answered softly, “Yes, it did.”

“Are the stones real?” “Yes. But not the finest quality.” “Can you remember who it was you sold it to?”

“She was a small girl. Her name was Jean. She bought them for her older sister’s Christmas present.”

“ How much are they worth?”

“The price,” he told her solemnly, “is always a confidential matter between the seller and the customer.” “But Jean has never had more than a few pennies of spending money. How could she pay for them?”Pete was folding theFROM 1951gay paper back into its creases, re-wrapping the little package just as neatly as before.“She paid the biggest price anyone can ever pay,” he said. “She gave all she had.”

There was a silence then that filled the little curio shop.In some far-away steeple, a bell began to ring. The sound of the distant chiming, the little package lying on the counter, the question in the eyes of the girl and the strange feeling of renewal struggling unreasonably in the heart of the man, all had come to be because of the love of a child.“But why did you do it?”He held out the gift in his hand.

“It’s already Christmas morning,” he said. “And it's my misfortune that I have no one to give anything to. Will you let me see you home and wish you a Merry Christmas at your door?”And so, to the sound of many bells and in the midst of happy people,Pete Richards and a girl whose name he had yet to learn walked out into the beginning of the great day that brings hope into the world for us all.