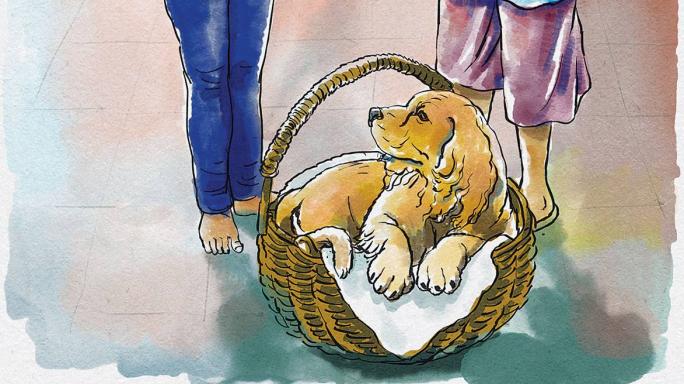 “I can’t believe we have a dog, Mum!” my daughter Ananya exclaimed, watching our new puppy curled up in her basket. I couldn’t believe it either. Ever since she was little, Ananya had always wanted a pup. I was often tempted to get her one, but how could I ever forget that day when, at five years old, her terrified howls had us running out in a panic, only to find that my sister’s dog had gotten a bit too close! Clearly, she was yet to get comfortable with a four-legged friend.

But one day in the summer of 2015, Ananya, all of 12, walked into the room and asked for a dog once more. “I’m not frightened any longer,” she announced. This time, my husband David told me that he was going to get Ananya the dog she wanted so much. I froze. David was terminally ill with a condition that was sapping all his strength and energy. “How can I look after you and a new pup?” I asked him. Growing up with dogs, I knew how demanding a pet could be. We didn’t need a puppy. Not now. But David was determined, and began looking for one.

As the disease progressed, however, the quest for a new puppy was forgotten. All through David’s illness though, I watched our little girl. She was busy with school and extracurricular activities, but there was confusion in her young eyes. When we lost him eventually, Ananya retreated into a shell. She grew quiet and pensive. I’d find her staring at the TV screen, but lost in a world of her own. I held her close, her young friends comforted her in the way that 12-year-olds do, teachers watched over her and my large family tried to keep things normal. Nothing seemed to work. I have to do something, I told myself. I felt so helpless. And then it struck me. The dog her father wanted to get her! It didn’t matter whether she was frightened of dogs or not; she needed a distraction.

And so I picked up the hunt. There were so many things to keep in mind. I had an ageing mother-in-law. Would she be able to handle the endless energy a young dog brought with it? We lived close to a busy street in a building where the gate was never shut. What if the dog bolted out and into traffic? Male or female? And which breed would best suit a family with a young child and a senior? Golden retriever or German shepherd? The hyperactive beagle or an enthusiastic boxer? I was confused. The local vet summed it up best, asking me to look ahead. “Once your daughter’s school work increases,” she said, “and she gets busy, you will have to look after the dog on your own. Go for a small breed,” she advised. That made sense. After reading about different breeds, I homed in on the cocker spaniel, a breed with a calm temperament that made for a good family dog. A year later, one sunny April day, our golden cocker spaniel puppy came home. I was reassured when her tail wagged the first time we spoke to her. She was curious about her new environment as well. All good signs, I thought in relief. I had, after all, decided on the puppy just by looking at a picture on social media. That she looked adorable, made it final. “She’s yours,” I told Ananya, “give her a name.” “Sandie,” she said after trying out a few. As I watched them run through the house, Sandie’s long, silky ears flapping behind her, I prayed that she would be the companion my 13-year-old sorely needed. My joy of adding a new member to the family was short-lived, however. Sandie was a hyperactive puppy who constantly chased us, nipping and biting at our ankles and hands. Sometimes she snarled. All this worried me. It’s normal puppy behaviour, I was told. “You’ve got a good dog,” the vet assured me, “She’ll settle down soon.” But nervous and overwhelmed, Ananya began staying away from Sandie. One day, I found her curled up in an armchair, her feet perched high up over the back of a sofa. There was no way Sandie could come close to her. Her grandma closed the door to her room and stayed there. I couldn’t believe this was happening. So this is why people abandon their dogs. They don’t think things through before bringing one home.

Sooner than anticipated, I became Sandie’s sole caretaker. My hands quickly ended up with long scratch marks, and tiny holes speckled all my clothes—an unwanted design addition made by Sandie’s teeth! I took anti-tetanus and even anti-rabies shots. Patience, I must have told myself a hundred times! Eventually, I found myself happier than I had been in a very long while. Despite the damages wrought by her wild antics, my heart melted each time I saw Sandie and her capers. My patience soon paid off; Sandie and I forged a tight bond, but, the dog who was meant to be my daughter’s companion, had become my shadow. The only time Ananya interacted with Sandie was when the plucky puppy was asleep. Still, I told myself, it’s a start.

Sandie settled down within a couple of months. She was now an even-tempered young dog who couldn’t love us enough. It wasn’t long before Ananya crept out from her safe chair and made tentative steps towards Sandie. Soon, she was running through the house, hoping that Sandie would follow. One game led to another. Before long, they were like litter mates, playfully chasing and falling over each other. I was more than delighted. And what a change had come about in my child! Ananya was now more relaxed. She laughed more, sang loudly and had a bounce in her steps. Sandie was hugged and held close, and so was I. The ice had finally broken. Suddenly, our home had come alive! The heavy blanket of sadness that had enveloped us was slowly lifting.

It’s now close to three years that Sandie has been in our lives. She’s the proverbial family dog I so desperately longed for—lively around her young mistress, and so protective about her too; calm with my ageing mother-in-law; and always watching me with something akin to devotion in her lovely brown eyes. And yet, there’s something different about this dog of ours. What is it about her that gets a school boy—a complete stranger—to reveal the painful story of losing his own pet dog, while he pats her back lovingly? And how does she know that the lonely lady next door needs more than just a wagging tail? That what she really wants is someone to talk to? What deep instinct makes her sit quietly while we pray? “Cockers are a sensitive breed,” her trainer once told me. “They pick up on emotions.”

Sometimes I’ve caught Sandie putting her nose into Ananya’s school book when studying gets too tough, or sitting next to her during piano practice, as if willing her tired fingers to continue. And then there are those times when she comes up to me when I’m overwhelmed by tough circumstances. With her paws on my shoulders, she looks into my eyes, her tail gently wagging. “If you’re feeling sad,” an animal behaviourist told me, “so will Sandie.” Over time, I stopped asking ‘how does she know?’ I realized it’s instinctive. And Ananya and I are just happy she’s around.

In October 2017, Sandie was chosen for a TV commercial. As the cameras rolled, she proved to be quite the star. What impressed me more was how Ananya, then 15, walked Sandie in front of the cameras and several onlookers. The girl who once shunned the limelight, now stood under the bright arc lights, a little nervous, no doubt, but happy and confident next to her beloved dog. As I watched the two of them, my mind went back to those days when I’d find Ananya curled up in her dad’s chair, lost and staring blankly at the TV screen, a far cry from the self-assured young lady she is today. My heart felt a little lighter, and the deep sense of powerlessness in not being able to help my child cope, faded away. As I walked over to them, I knew for certain that this was one very special cocker spaniel. Our Sandie was a dog sent to heal us.

Do You Like This Story?
35
0
Other Stories
Please enter valid text
Must Reads
Latest Issue