They loved Rama, but they did not consider themselves men, women or children. They were the hijras of Ayodhya. 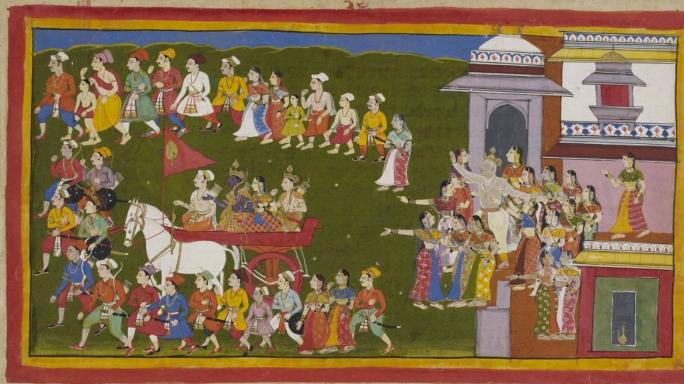 When a transwoman joins a jama’at—a household with her adoptive mother and a network of other relatives—she inherits its folklore. And the tale that sustains thirunangais, giving them a place in history and mythology, is a story from the Ramayana. This story cannot be found in most versions of the Ramayana—not Valmiki’s, not Kambar’s, not Tulsidas’s—but it is sacred to the thirunangai tradition.

When the Crown Prince of Ayodhya, Rama, was banished to the forest after a series of misunderstandings and machinations, his bride Sita and his brother Lakshmana insisted on accompanying him. So did the entire kingdom of Ayodhya. Finally, as they were about to enter the forest, Rama turned to the subjects of the kingdom and said: ‘Please walk no further with me.’

The people of Ayodhya obeyed. But they refused to leave the spot. They would wait right there for his return, due thirteen years later.

‘No,’ said Rama. ‘Every man, woman, and child who loves me must return home.’

Every man, woman and child returned home. As the crowd began to disperse, Rama, Lakshmana and Sita walked into the forest. They did not notice that some people stayed behind. They saw them again, thirteen years later, still waiting.

They loved Rama, but they did not consider themselves men, women or children. They were the hijras of Ayodhya.

Had Rama known of their devotion, known that they would not be able to choose between their love for him and their obligation to obey his commands, because he knew their loyalty was greater than that of other humans?

Or had he too, this paragon of virtue and justice and deference to the rule of law, forgotten they existed?

As they waited by the forest through thirteen long years for his return, what did those transwomen feel—elation, pride, rejection, despondency, or resignation to invisibility? The legend goes that when Rama returned, he was stricken with guilt, and rushed to embrace them, that he promised he would look after their ilk for all time, and told them they would always have a special place in his heart.

Were there only transwomen in Ayodhya, who were not-men-not-women? Or were they themselves guilty of the same oversight, to atone for which Rama swore he would protect them for eternity? In fostering this story down the generations, had they forgotten about another category of neither-man-nor-woman? Were there no transmen in Ayodhya? Or did they stand waiting too, ghosts to the very people who were ghosts to Rama?