Sold to the Islamic State as a Sex Slave : Nadia Murad's Terrifying Encounter with Militants

Nobel Peace Prize winner Nadia Murad recounts the shocking torture she faced at the hands of the militants of the Islamic State. 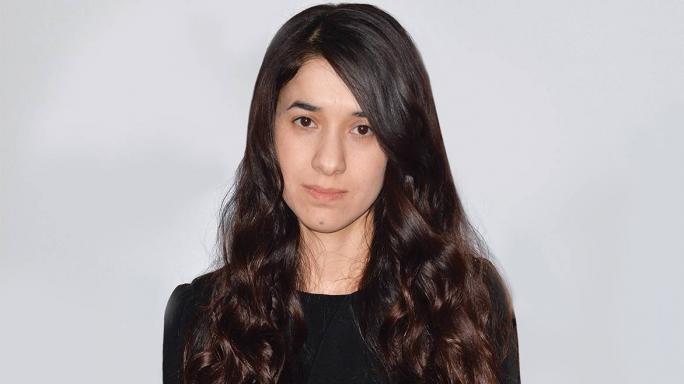 A militant pointed at where I was sitting. “Come with me,” he said, then turned and walked toward the door.

“Don’t go!” Kathrine wrapped her small arms around me, trying to keep me from standing up.

I didn’t know what he wanted, but I didn’t think I could say no to him. “If I don’t, they will just force me,” I told her, and I followed the militant.

He led me to the garage on the first floor, where Abu Batat and Nafah were waiting along with another militant. The third militant spoke Kurdish and I was shocked when I recognized him; it was Suhaib, who owned a store in Sinjar City. Yazidis visited his store all the time and I am sure many thought of him as a friend. All three men looked at me angrily. They still wanted to punish me for my outburst on the bus. “What’s your name?” Nafah asked, and when I tried to back away he pulled my hair and pushed me against the wall.

“When were you born?” he asked, and I told him. “Nineteen ninety-three.”

Next he asked, “Are you here with any of your family?”

I paused. I didn’t know if they wanted to punish Kathrine and the others just for being related to me, so I lied. “I’m here with the other girls,” I said. “I don’t know what happened to my family.”

“Why did you scream?” Nafah tightened his grip on my hair.

I was terrified. I felt my body, which had always been small and thin, practically disappear in his hands. I told myself to say whatever I had to for them to let me go back upstairs to Kathrine. “I was scared,” I told him honestly. “This guy in front of you”—I gestured toward Abu Batat—“touched me. The whole trip from Solagh, he was touching us.”

“What do you think you’re here for?” Nafah repeated what he had said on the bus. “You are an infidel, a sabiyya, and you belong to the Islamic State now, so get used to it.” Then he spat in my face.

Abu Batat took out a cigarette, which he lit and gave to Nafah. I was surprised; I thought smoking was illegal under Islamic State law. But they didn’t mean to smoke the cigarette. Please don’t put it out on my face, I thought, still concerned, back then, with being pretty. Nafah pushed the lit cigarette into my shoulder, pressing it down through the fabric of the dresses and shirts I had layered on that morning, until it hit my skin and went out. The smell of burned fabric and skin was horrible, but I tried not to scream in pain. Screaming only got you into more trouble.

When he lit another cigarette and put it out on my stomach, I couldn’t help it—I cried out.

“She screams now, will she scream tomorrow?” Abu Batat said to the others. He wanted them to be even harsher with me. “She needs to understand what she is and what she’s here for.”

Nafah slapped my face hard, twice, and then let go of me. “Go back to the other sabaya,” he said. “And never make another sound again.”

Back upstairs the room was dark and crowded. I pulled my hair over my shoulder and put my hands on my stomach to hide the burns from my nieces, and then I found Kathrine, sitting next to a woman who looked to be in her late twenties or early thirties. The woman wasn’t from Kocho; she must have arrived at the center before us. She had two young children with her, one a baby young enough to be breast-feeding, and she was pregnant. She held the infant to her chest, rocking slightly to keep him quiet, and asked me what had happened downstairs. I just shook my head.

“Are you in pain?” the woman asked me.

Although I didn’t know her, I leaned against her. I felt very weak. I nodded.

Then I told her everything, about leaving Kocho and being separated from my mother and my sisters, about seeing my brothers being driven away. I told her about the bus and Abu Batat. “They beat me,” I said, and I showed her the cigarette burns on my shoulder and on my stomach, raw and painful.

“Here,” she said, reaching into her bag and handing me a tube. “It’s diaper cream, but it might help with the burns.”

I thanked her and took the lotion to the bathroom, where I rubbed some of it onto my shoulder and stomach. It soothed the burns a little. Then I rubbed a bit more onto the parts of my body where Abu Batat had touched me. I noticed that I had my period, and I asked a militant for some sanitary pads, which he handed to me without looking at me.

When I sat back down in the room, I asked the woman, “What has been happening here? What have they done to you?”

“Do you really want to know?” she asked, and I nodded. “On the first day, on August third, about four hundred Yazidi women and children were taken here,” she began. “It’s an Islamic State center, where the militants live and work. That’s why there are so many of them here.” She paused and looked at me. “But it’s also where we are sold and given away.”

“Why haven’t you been sold?” I asked.

“Because I am married, they will wait for forty days before giving me to a militant to be his sabiyya,” she said. “That’s one of their rules. I don’t know when they will come for you. If they don’t choose you today, they will choose you tomorrow. Each time they come, they take some of the women. They rape them and then they bring them back, or sometimes I think they keep them. Sometimes they rape them here, in a room in the house, and just bring them back when they are done.”

I sat there silently. The pain from my burns built slowly, like a pot of water slowly coming to a boil, and I winced. “Do you want a pill for the pain?” she asked, but I shook my head. “I don’t like taking pills,” I told her.

“Drink something, then,” she said, and I gratefully took the bottle from her, drinking a few sips of the lukewarm water. Her baby had quieted down and was close to sleeping.

“It won’t take much time,” she continued in a softer voice.

“They will come, and they will take you, too, and they will rape you. Some girls rub ashes or dirt on their faces, or mess up their hair, but it doesn’t matter because they just make them shower and look nice again. Some of the girls have committed suicide, or tried to, by cutting through the veins in their wrists right over there,” she gestured to the bathroom. “You can see the blood high on the walls where the cleaners don’t notice it.” She didn’t tell me not to worry or that everything was going to be fine. When she stopped talking, I leaned my head against her shoulder, close to where her baby had just fallen asleep.

Excerpted with permission of Hachette India from The Last Girl: My Story of Captivity and My Fight Against the Islamic State by Nadia Murad with Jenna Krajeski; Virago Rs. 499