The Best From The World Of Entertainment, Books and Music: Annette, Shershaah, NavaRasa and More

Our top picks from movies, books and streaming 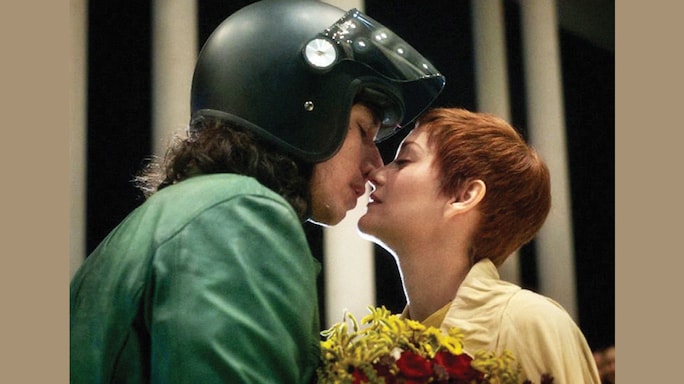 Adam Driver and Marion Cotillard in a still from Annette

ENGLISH: After its recent premiere at Cannes, reviewers didn't quite seem to know what adjectives they should employ for this film. While most called ANNETTE(streaming on AmazonPrime Video from 20 August) “beautiful”, they also thought it was “baffling”. Starring Adam Driver and Marion Cottilard, this Leos Carax rock opera is about a mysterious child who turns her parents’ lives upside down.

HINDI: There is hardly anything which Manoj Bajpayee touches these days that does not become gold. Given its high-adrenaline trailer,DIAL 100 (releasing on Zee5 on 6 August) seems to tick all the boxes an edge-of-your-seat thriller should. In an effort, to exact revenge for the death of her son, Seema Palwa (Neena Gupta)kidnaps the family of police officer NikhilSood (Bajpayee). Chaos ensues. Though it is hard to replicate the valour of Captain Vikram Batra in the 1999 Kargil War,it was, perhaps, a matter of time before the Hindi film industry gave his heroism the cinematic treatment.

SHERSHAAH, releasing on Amazon PrimeVideo on 12 August, is the perfect biopic to watch this Independence Day weekend. Siddharth Malhotra plays Batra as an ordinary man filled with extraordinary courage.

TAMIL: Even though anthology films are all the rage, NAVARASA (releasing on Netflix on9 August) promises to exceed expectations. Created by Mani Ratnam, the film’s segments each explore one of nine emotions that make up the gamut of human feeling. With directors such as Arvind Swami and Bejoy Nambiar, and a cast that includes Revathi and Vijay Sethupathi, this one cannot be missed. Modern Love Season 2:The first season of this anthology series proved not only that the New York Times column Modern Love is a great read, it is also fun to watch. With a cast that boasts of names such as Kit Harrington and Minnie Driver, this collection of love stories seems to have all the right ingredients—quirk, warmth and dollops of mush. Streaming on Amazon PrimeVideo from 13 August.

Cocaine Cowboys: The Kings of Miami: Coming to Netflix on 4 August, this series will see filmmaker Billy Corben update his 2006 documentary, Cocaine Cowboys. Fifteen years ago Corben gave us a compelling overview of cocaine trafficking, but this time he has narrowed his focus down to two notorious drug lords—Augusto “Willy” Falcon and Salvador “Sal” Magluta.

Better to Have Gone: Auroville—Love, Death and the Quest for Utopia by Akash Kapur, Simon & Schuster

John Walker, the handsome scion of an influential East Coast American family, came to India in the 1960s with Diane Maes, his Belgian hippie lover. Together they gave shape to their dream of a new world. At first, Auroville, the community they joined, seemed to have realized utopian ideal, but like with any utopia, John and Diane’s plenitude could not last. They were both found dead20 years later.Akash Kapur grew up in Auroville and later married, Aura-lice, John and Diane’s daughter. In2004, the couple return to Pondicherry with their two sons. In his memoir,Kapur confronts the ghosts of his parents-in-law, but also asks a deeper question: What price are we willing to pay in our quest for a perfect world?

The House Next to the Factory (Fourth Estate):Made up of nine interlinked stories,Sonali Kohli’s book tells the story of post-Partition India through its protagonist Kavyaand her affluent family.

Funeral Nights (Context): In Kynpham Sing Nongkynrih’s unusual and compelling novel,a group of friends find themselves lost in a jungle, swapping stories that throw light on Khasi life and culture.

Fragments AgainstMy Ruin: A Life (Context) Farrukh Dhondyis many things—television celebrity, writer, unabashed leftist and homegrown Parsi boy. This memoir is a sum of all those parts.

YOU MAY ALSO LIKE ... Discordant Notes: The Voices of Dissent in the Last Court of Resort (Volumes I & II) by Rohinton FaliNariman (Penguin): Although justice comes to rely on consensus, it is inessential that all judges on a bench are always in agreement. A dissenting judgment, for instance, records the opinion of a judge who disagrees with the verdict at which his peers arrive. In these definitive volumes, the eminent RohintonF. Nariman examines the most important dissenting judgments in the history of India’s Supreme Court.

When Amit Trivedi burst on to the scene, actors in Hindi films still pre-tended to sing on screen. Unlike today, Bollywood soundtracks were much sought after. Trivedi didn’t take long to engineer what would soon become a trademark sound. For audiences, the songs of Dev.D(2009), Aisha (2010) and Queen (2013)were at times more memorable than the films themselves. Even though Trivedi’s style is unmistakable, no two melodies of his have ever sounded the same. His is a big, profound talent.

Trivedi has always been very good at understanding a film’s context, but with the pandemic sucking Bollywood dry, he, too, has been forced to adapt.AT Azaad, his new independent label, gives Trivedi freedom to make music he likes. On ‘Churaya’, for instance, he uses the trumpet and saxophone liberally. With a video that’s as cheery as his production, Trivedi shows us that music can beat all odds. LISTEN AUDIOBOOK:Neil Gaiman’s THE SANDMAN is Bible for some comic book lovers and Audible did due justice to its cult status when assembling its audiocast: James McAvoy,Riz Ahmed and Michael Sheen.