Albrecht Dürer's Portrayal Of Christ And The Magi 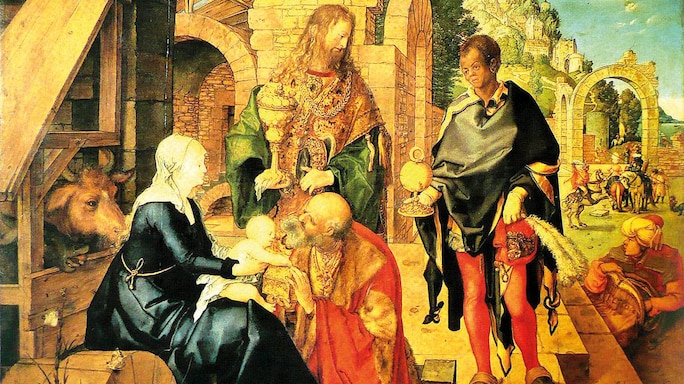 Among the legends in the history of European art, Albrecht Dürer gained fame mainly for, but not limited to, his high-quality woodcut prints, which radically opened up the potential of the medium. His oeuvre also includes engravings, altarpieces, and aintings—most of which have left an indelible stamp on Renaissance art.

The life of Christ features prominently in several Renaissance works by Raphael, Caravaggio and Dürer. Dürer’s The Adoration of the Magi (above), brings to life one of the more well-known episodes of Christ’s life: The Magi blessing and bestowing gifts on the infant Christ. The panel painting is currently housed at the Uffizi Gallery, in Tuscany, Italy.

This work exhibits Dürer’s masterful fusion of elements and conventions on use of perspective, proportions and colours from two significant branches of Renaissance art and culture.

The result is an exotic, vibrant and colourful portrait that evokes the wholesome Yuletide spirit. Architectural elements such as broken columns and pillars pervade the scene, adding to the interplay between creation and decay.

Amidst the festivities surrounding Christ’s birth, Dürer deftly weaves in a premonition of Christ’s death in the background, represented by King Herod’s horsemen relentlessly searching for the infant. It tells an entire story, in the centre of which is the figure of Dürer himself as one of the Magi, draped in green and looking away from Christ.