An accident victim's plight takes a turn for the worse, as his friends fear for his health and safety 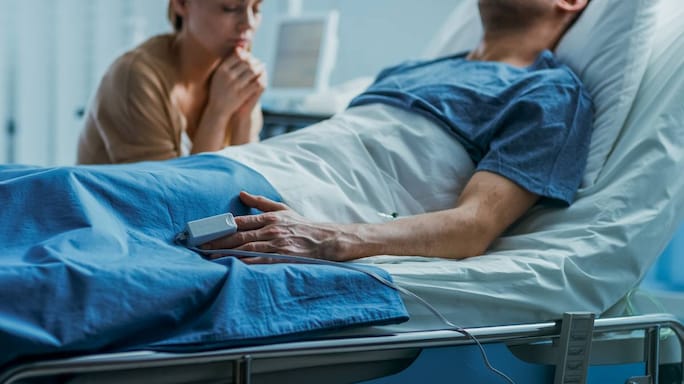 The WhatsApp message echoed like a cricket and landed on Sandhya’s phone just as she was stepping out of the lift, filled with the pride of having posed an unusual question to herself—why were large mirrors installed on the three walls of the lift?—and of having answered it with sufficient gravitas, by deciding that no, it was not to shine one’s face or pat one’s hair into place, it was to ensure that one did not feel unsettled as one travelled alone towards the sky in this claustrophobic cell by creating a feeling that one had one’s own reflection for company.

She flipped open her leather bag mid-stride and started searching for her mobile. This was such a curse. She always forgot into which pouch she’d hurriedly dropped the mobile. At times it would lie along with her lipstick, face cream, eyebrow pencil and comb in the pouch on the left side of her bag. Or in the small pouch in the middle, with her purse and the New Testament that she always carried with her which had ‘The Gideons International Gift of Love’ on the introductory page. Or with the sanitary pad and Chetan Bhagat’s novel in the extreme right compartment. In spite of wanting to find a permanent place for it every single day, she never could. Which is why she kept missing many calls. And listened constantly to complaints that she never answered calls.

She searched for her phone with the firm resolve that if it was some message which spouted stupidity, she would just delete it and exit from the group, even if it had people she was fond of. This was another curse. That bloody message would come only when she was in a tearing hurry to go somewhere. And after searching frantically, thinking that it could be something important, it would turn out to be terrible Sardarji jokes heard ten thousand times before or God’s own promoters sending prayers to be forwarded to fifteen other people. And then anger would surge through her. Many a time, she wanted to hurl the phone as far as possible, wondering why, even in this WhatsApp age, neither she nor God had any respite from being attacked by these creatures.

Finally, by the time she managed to ferret the phone out, Sandhya had reached the parking lot. ‘Midhun had a small accident. Come quickly to Medical Trust.’ That was Rithu Kurian’s message. She faltered for a moment as though a black bird had slapped her on the face. Then she tried calling Rithu—but she was not reachable. She guessed Rithu might be in a place where there was no signal—perhaps inside the hospital.

All through her scooty ride to Medical Trust, Sandhya kept trying to console herself by thinking that there wouldn’t be any problem and that it would just be something minor. She decided that WhatsApp had not evolved enough to deliver any serious message. It never grew beyond kitchen selfies, Sardarji jokes and small talk. If it had been anything serious, Rithu would definitely have called. Or sent an SMS. This was only a WhatsApp message. But just to be sure, at every red signal and at every major block, when the vehicle came to a standstill, she kept trying to reach Rithu.

Luckily, she got a call from Rithu before she reached the hospital. Rithu was waiting for her at the reception and took her to the ICU.

"The bike bumped into some vehicle and skidded on the highway. Some skin has been lost on the arms and legs. And there’s a small wound on the head. The doctors said that there’s nothing to worry about. He lay bleeding on the road for a while. That’s all. The other vehicle sped away as usual, without stopping. Anyway, in which Indian city are bikers safe? They are the lower caste that anyone can hit and run." Before they reached the ICU, Rithu Kurian briefed her about the situation in detail with a tinge of outrage. Which was probably why Sandhya did not feel very scared when she saw Midhun through the glass window, strapped to monitoring devices and medicine tubes. Not only that, she believed implicitly that the God she trusted in would protect him and keep him safe under His wings, like He protected the dove from the eagle. In fact, it was this belief that had made her force Midhun into going with her to the prayer group meeting and then work on getting him to become a part of it.

It was when Rithu and Ragesh were planning to go to a movie straight from the office that Brother Aruldas called and informed her about Midhun’s accident. They left for the hospital immediately. On the way, she WhatsApp-ed Sandhya the news. It was because she had no idea what exactly had happened and how serious things were that she chose to just WhatsApp. On reaching the hospital, she was glad that she had done so. If not, Sandhya would have really panicked.

By the time she reached the hospital, Dr John Samuel and Pastor Sam Philip were already there. And using their contacts and influence, they had ensured that Midhun got the best possible medical attention. Even in that moment of worry, Rithu felt a happiness tinged with pride about the fact that she had landed amidst people who spent most of their time for others. She could have ended up anywhere in this great big city. Even in dark alleys. But God must have decided that she should be with these people and, through them, find the path to goodness. Not just her, everyone in the group, including Ragesh.

Her only fear was that Sandhya would lose courage. But when she met Sandhya in that hospital corridor and told her what had happened, she realized that Sandhya had more courage than she thought. Not only that, Sandhya did not falter even as she stepped out of the ICU, wearing a hospital gown, after seeing Midhun during visiting hours. When Ragesh offered to stay the night as Midhun’s caretaker, she turned him down affectionately and took it upon herself, almost as if it was her right. People imprisoned in their hostels and homes had to report faithfully every night. But there was no need for Sandhya, who lived alone in a studio apartment, to do this. Her space and time were hers alone. The intrinsic value of her freedom lay in the fact that she did not have to answer to anyone. And that was probably why nobody refuted her right to stay the night. They silently agreed that it was indeed Sandhya who should be beside Midhun that night.

It was based on the reassurance of Dr Samuel and the insistence of Sandhya that they—Rithu and Ragesh—left the hospital that evening, although a bit late.

But the next afternoon, a call from a totally bewildered Sandhya reached Rithu. And it was to say that Midhun’s condition, which had been stable until then, had suddenly taken a turn for the worse, and that she was really scared. "The doctors are not saying anything definite. The nurses said that there were a few complications. I have no clue what to do, Rithu," wept Sandhya, who had lost all the courage she had had until then.

Rithu worked in an MNC that was based in Korea. One could not walk out of there with the same ease with which one could walk out of a local government office. It involved a complex process, with emails being sent giving detailed explanations and then waiting patiently for a reply to comein. But she managed to cross all these hurdles and reach the hospital in an hour. "He was fine in the morning when I saw him, Rithu. We also spoke for a while…" she cried. "The entire fellowship is praying for him. I am convinced that it will bear fruit. We were taught to believe firmly, without doubt. Then why are you so scared?" said Rithu, comforting her.

"Yes, that’s the only way ahead," said Sandhya. After a while, a dejected Dr Samuel walked out of the ICU and said, "There was an internal haemorrhage that did not catch our attention yesterday. That has become worse. There have been many instances in my life when medical science was reduced to being a helpless spectator. Only God can lead our Midhun back to life. I know many lives that God gave back. Pray hard."

Sandhya prayed. In all the languages that she knew.

Translated from the Malayalam by Swarup B. R.

Excerpted, with permission, from Body and Blood by Benyamin, published by HarperPerennial, an imprint of HarperCollins Publishers