Sandip Roy is a lapsed software engineer turned writer. His debut novel, Don’t Let Him Know, was longlisted for the 2016 DSC Prize for South Asian Literature. A long-time radio commentator in the US, he hosts The Sandip Roy Show on Audio Express, is a columnist for Mint Lounge and The Hindu and has written for various anthologies. 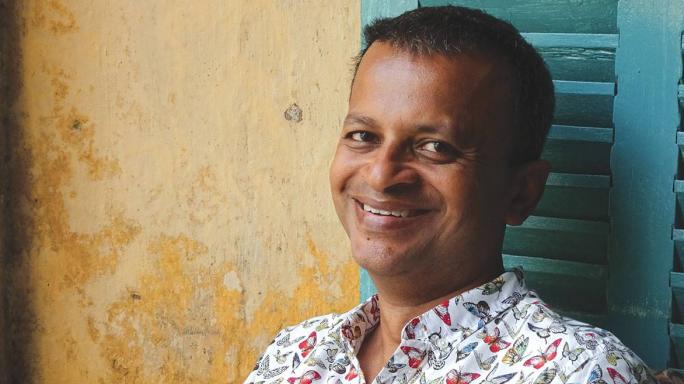 Sandip Roy is a lapsed software engineer turned writer. His debut novel, Don’t Let Him Know, was longlisted for the 2016 DSC Prize for South Asian Literature. A long-time radio commentator in the US, he hosts The Sandip Roy Show on Audio Express, is a columnist for Mint Lounge and The Hindu and has written for various anthologies.

This was the first time I saw my neighbourhood and life reflected in English fiction, and so vividly. It had a lot to do with making it seem possible that I too could write, that my experiences count.

My Family and Other Animals by Gerald Durrell, Puffin, Rs 560.

My father got me this book, and the lush descriptions of Corfu, the humour, the animals, all had me hooked. I sought out all his other books—my first for any writer. He visited our school and I got my first author autograph.

Tales of the City by Armistead Maupin, Black Swan, Rs 550.

San Francisco is a city I dreamt up through the exuberant colourful characters in this series. It’s no accident I ended up living there for two decades. It was a book that made me fall in love with a city I’d never seen.

I remember thinking I wish I had written it, though Sri Lanka during the civil war was far removed from my world. Selvadurai’s empathetic voice, his keen eye and the way he handled sexuality remains pioneering.

Video Nights in Kathmandu And Other Reports from the Not-So-Far East by Pico Iyer, Vintage, Rs 979.

My introduction to travel writing, this book did not just transport me elsewhere but also taught me how to look at the world with wry wit. Iyer’s great gift is how he straddles east and west so effortlessly.

Combining memoir, sociology and food seamlessly, it’s a book I’ve gone back to again and again—sometimes to read, sometimes to cook from—leaving its pages both dog-eared and turmeric-stained.

Hooked initially to Sedaris’ hilarious radio essays, I was captivated by his ability to alchemize crazy family stories about nudist camps, OCD and grandmothers into something funny, heartbreaking and razor-sharp. Long before literature festivals became fashionable, I went to watch a live book-reading show of his.

This saga about 19th century Renaissance Bengal has an enthralling mix of historical fact and fiction. It’s a soap opera—I mean it as a compliment—where my textbook characters sprang to life.

Just stunning. The simple line drawings hit like a hammer as the Iranian Revolution comes to scary life through a little girl’s eyes. On a related note, let me sneak in Yiyun Li’s staggering The Vagrants about the aftermath of China’s Cultural Revolution here.

I would read and reread the section that describes Virginia Woolf committing suicide and my heart would stop every time. I marvelled at how Cunningham could take the minutiae of a day and turn it into something so gripping and profound.