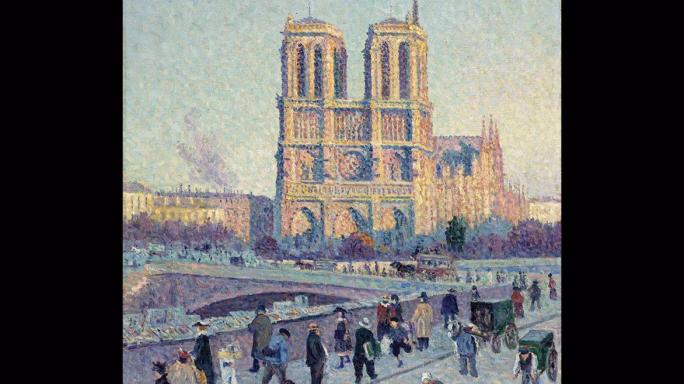 Maximilien Luce (1858–1941) was a French painter best known for his Neo-Impressionist paintings. He often used the technique of divisionism in which patches of paint are dabbed on the canvas separately but, when viewed from a distance, create the optical illusion of being painted seamlessly. Having grown up in the working-class district of Montparnasse in Paris and being a believer of the political philosophy of anarchism, Luce often peopled his landscapes with the daily routines and labours of the proletariat. In the above work, we see Parisians ranging from the well-dressed bourgeois to a baker carrying his basket on his head. Above this bustle and in the centre of the painting is the Notre-Dame de Paris, a Catholic cathedral completed in 1345 and considered one of the finest examples of French Gothic architecture, as seen from the Saint-Michel embankment. Notre-Dame, which has been the subject of several artworks over the centuries, was recently seriously damaged by fire.