How to Recognize a Trustworthy Doctor 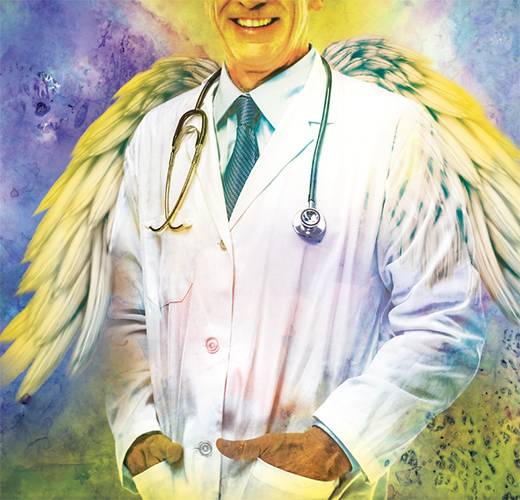 The difference between a rational, ethical doctor and one who is not can be the crucial difference between good health outcomes and bad health outcomes, and sometimes even between life and death. As doctors who have practised and interacted with many other doctors, we share clues about how to spot a good physician, not just by looking at technical qualifications, but based on their mode of interacting with patients.

The most important asymmetry between a doctor and patient is the asymmetry of knowledge. The doctor generally knows much more about what is going on in the patient's body, what needs to be done and what is the likely outcome than what most patients will ever know. Given this context, the doctor has a duty to share a small portion of his or her vast pool of knowledge with the patient--at the very least by carefully addressing the questions and doubts of the patient and caregivers; and by allowing them the autonomy of choosing appropriate treatment options, wherever possible.

One case from Dr Arun Gadre's experience is illustrative of the importance of these attributes in a doctor. A 90-year-old man was admitted at midnight to a reputed nursing home with heart failure and severe breathlessness. The relatives were anxious- even though they knew that age was catching up with grandpa, his present suffering was unbearable. The physician came and prescribed something; he was not ready to entertain any questions. His blunt response was: "What can we do for a person at the age of 90 with such severe heart failure?" When the patient's son tried to inquire about how to alleviate the old man's suffering, the rude answer came, "Do not argue with me, I have no time to answer silly questions."

Grandpa was shifted to another hospital. The new physician patiently answered all the questions and elaborated upon the nearly hopeless long-term prognosis for the elderly man, but agreed to perform a small procedure to remove the liquid that had collected around his lungs to relieve him of his acute suffering. The simple process of dialogue between the patient's caregivers and the doctor made a huge difference.

The message is simple--whenever there is a choice between two doctors with similar years of experience and qualifications, opt for the doctor who is willing to talk and explain things. The practice of medicine is not just about good technical skills, to a great extent it is also about good communication. The very word 'doctor' is derived from the Latin word for 'teacher'. In brief, whenever we are in the role of a patient or caregiver, we should try to choose providers who are willing and able to communicate--every patient deserves to be spoken to decently and given an explanation about their illness and the treatment that they are undergoing.

A rational, ethical doctor does not create fear or panic, but gives timely and balanced information.

It has been said that if you can make a person sufficiently fearful, you can get him to do almost anything. And there is perhaps nothing that induces as much fear as the apprehension of physical suffering or loss of life. When a patient approaches a doctor, there is a valid expectation that while the severity of the problem should not be underplayed, the patient should not be driven to panic and rushed into taking a major decision like undergoing an operation (except of course in the case of genuine emergencies). Unfortunately, nowadays instances of such 'panic-inducing medical advice' are becoming rather common. We have not infrequently come across situations where immediately after an angiography, the cardiologist has told the patient, "Angioplasty must be done immediately, within a few hours," and the patient has been rushed into undergoing an invasive procedure, even though the option of waiting and taking a balanced decision might have proved to be more appropriate.

A rational, ethical doctor does not pretend to know everything; the doctor can admit that there are aspects of the illness that he or she cannot definitively comment upon.

Not all doctors might like to publicly admit that in a significant number of cases, in the beginning, the doctor may be unsure of the exact diagnosis. In these situations, the doctor is acting on probabilities rather than certainties. The doctor may rule out various possibilities in the course of investigations and treatment. So when the patient or relative anxiously asks, "Doctor, what is the illness?", in a certain proportion of cases, the fact may be that even the doctor does not exactly know.

In these days of rapidly expanding medical knowledge, it is very difficult for any doctor to keep up with all the developments even in his or her own speciality, not to mention a myriad other specialities and areas of medicine. Would we not prefer a doctor who is aware and frank about his or her own limitations, who does not hesitate to take another expert's opinion or refer to an appropriate specialist, when required, in the interest of the patient?

A rational, ethical doctor does not advise additional investigations and procedures due to demands from the patient.

We live in a consumerist society, where we are often conditioned to think that 'more' is generally 'better'. Needless to say, this logic is often inappropriate, but some well-off patients tend to think that if some tests are necessary, then undergoing more investigations is even better, especially if the test is more expensive. However, the job of a physician is not to cater to each and every whim of the patient, but rather to guide the patient towards rational management of illness. Even though many laboratories give hefty commissions to doctors who refer patients to them, a rational physician would not recommend a test or procedure just because the patient asks for it.

Doctors often have to rely on information that is incomplete, while  trying to understand what is wrong with the patient. Doctors continuously deal with uncertainty and frequently work their way through the patient's illness, rather than always having an unambiguous diagnosis from day one.

The human body is an immensely complex entity, which medical science understands only partially, and there are also tremendous variations from patient to patient. The information available to a doctor may be limited, and there may be unusual, unexpected or rare manifestations of an illness that the doctor must grapple with. Hence, sometimes it may be more logical to talk in terms of possibilities and probabilities rather than pressurizing the doctor to give a completely definitive answer.

Good doctors continuously manage risk--doctors who are only interested in saving themselves may not save many patients.

Many patients have survived and are living today because the doctors treating them were willing to take certain risks. Especially doctors working in remote rural and tribal areas know that recommending a critical patient be taken away to a distant city for treatment may be the equivalent of sending the patient home, and maybe to certain death. If it is within their sphere of competence, they may need to use their professional judgement and take informed and considered risks for the benefit of the patient. Of course, doctors must never take reckless decisions or unjustified risks, or deal with matters that are beyond their competence. But a small risk taken by a doctor may make a huge difference and save a patient's life.

Doctors need to deal constantly with changing situations, both related to medical knowledge and society. They have to keep abreast of the rapidly changing field of medicine, and also grapple with the changing expectations of patients.

Fortunately, today patients are on the whole better informed about illnesses and treatments than they used to be a generation ago; think of your overall awareness about health issues compared to, say, your parents. This positive change should be harnessed so that the doctor and patient/caregiver can work together as an informed team, in dialogue with each other, and choosing the best line of treatment that is appropriate to the patient. However, there is also a flip side to such increased awareness on medical issues. While Google has literally brought us a world of information, this information may not always be of high quality or appropriate to the patient's specific situation. In some situations, patients may access half-baked information off the internet and be convinced that they need to undergo a particular line of treatment.

One of my orthopaedic surgeon friends narrated another case, which exemplifies the changing expectations of patients and the emerging perils of 'internetosis'. He was acquainted with an elderly couple. The woman was in her 60s and had mild arthritis. One day she visited him along with her husband and asked him to talk with their engineer daughter, living in the USA, on the phone. The daughter was aggressive with the doctor, and complained that he was not doing his best to relieve her mother's suffering. She asked for the his email ID, as she wanted to send him internet links related to knee replacement surgery. The surgeon calmly and firmly explained that the patient had mild arthritis, that painkillers were working well and if she were to take his advice seriously and start exercising as instructed, the painkillers could be stopped within two months. He refused to operate and asked them to see another doctor if they felt like. But the husband understood his logic, and two months later the old lady visited the him with a bright smile. She had recovered completely.