Hicky's Bengal Gazette: The Story of the First English-Language Newspaper in India

James Augustus Hicky's tale is important because it shows that when you have an independent press you can expose corruption. Around the world, freedom of the press is under attack.

Already in 2018, three journalists have been murdered in India. Last year, 11 of them were killed. Unsurprisingly, India's ranking in press freedom has fallen to 138, according to an index compiled by Reporters Without Borders. These are sobering facts, but it is even more worrying when lawmakers greet these acts of violence with silence—when they should secure the lives of people and promote tolerance and acceptance instead.

In India, "hate speech targeting journalists is shared and amplified on social networks, often by troll armies", according to Reporters Without Borders.

In the US, President Donald Trump has called the press the 'enemy of the people', the same phrase Stalin used when he targeted and killed his political adversaries. Trump has repeatedly called real news stories 'fake news' and rebuked media platforms that have criticized him. This sentiment echoes around the world—politicians with despotic tendencies have been declaring legitimate media as 'fake', undermining trust in democratic institutions and stifling free speech. Two hundred years ago, in 1780, the press faced similar issues in India when Warren Hastings, the governor general of the British-ruled provinces, tried to shut down India's first newspaper, Hicky's Bengal Gazette, because of its fearless reporting.

Not unlike Trump's tirades, Hastings' allies called the paper's founder, James Augustus Hicky, a "stupid ignorant wretch" and a "man among the dregs of the people" who acted with "unparalleled insolence" against his social betters. These phrases were the 18th century equivalent to denigrating the freedom of the press—though perhaps more refined than what we hear today.

The tale of India's first English-language newspaper is long and sordid. Although Hicky's Bengal Gazette lasted only two short years, there is much we can learn about the role of a free press in society, and what the press should—and should not—do.

In January 1780, Hicky, a poor Irishman who had recently been freed from debtors' prison on inflated charges, announced that he would be launching India's first newspaper. He promised a "rigid adherence to truth and facts" and that "nothing would be inserted" without authentication.

Hicky largely kept true to his word. But later that year, friends of Governor General Hastings announced they were going to publish a rival newspaper called the India Gazette. When Hicky found out that Hastings would allow the India Gazette to mail its newspapers to readers for free, Hicky saw his livelihood challenged.

At that moment, Hicky began to expose corruption that ran deep through the English East India Company. He reported that the only reason he had not received free postage (compared to the India Gazette) was because he had not paid a bribe to a top East India Company employee named Simeon Droz and to Marian Hastings, the governor general's wife.

"A few days before I published the first number of the Bengal Gazette, Mr Droze in company with two other gentlemen came to my house," Hicky wrote. They told Hicky to meet Hastings' wife to secure the perk, but he refused. "I told him that I could not think of doing such a thing as that," he later wrote.

After Hicky's expose, Hastings and his allies moved to punish him, hoping to stop his reporting. Hastings first forbade Hicky from mailing his newspaper through the post office, forcing him to hire his own private mail carriers. But this act only strengthened his resolve.

These were powerful statements, and Hicky soon made good on his promise to expose corruption. Over the next six months, he printed many articles, including ones that claimed Hastings had bribed the chief justice of the Supreme Court of Bengal and handed out corrupt contracts. The reporting was too much for Governor General Hastings to stand. In June 1781, Hastings sued Hicky for libel. He was found guilty in front of the Supreme Court and sentenced to jail. When Hicky refused to moderate his writing, even printing his newspaper from jail for nine months, Hastings sued him again. By March 1782, the Supreme Court ordered his printing press to be seized, shuttering Hicky's Bengal Gazette for good.

To be clear, Hicky was provocative for his time and that may have contributed to his downfall. He also began to report things that may not have been verifiable, such as questioning Hastings' manhood and talking about the sex life of one of Hastings' top military commanders. He even printed articles threatening insurrection if Hastings continued his tyrannical practices. Of course, these articles did nothing to endear him to the establishment.

Hicky fought to the end, printing his newspaper up to the moment the Supreme Court seized his printing press. He meant every word that he would fight for his right to print a newspaper, whose voice no company, nor any king, had the right to silence.

Ultimately, his fight was not in vain. Through his reporting, the scandals of top Company officials in India became widely known. Back in England, Parliament recalled both Hastings and Chief Justice Elijah Impey to face impeachment trials. Although Hastings and Impey were eventually acquitted, their reputations never quite recovered, due, in part, to Hicky's reporting.

Hicky's tale is important because it shows that when you have an independent press you can expose corruption. If we let power-hungry politicians declare what is news and what is not, if we let regimes determine who can print and who cannot, in the words of Hicky's Bengal Gazette, "we shall then be in the condition of the sheep". And when the press is gone "our house may be robbed whilst we sleep".

The following excerpt is from Hicky's Bengal Gazette: The Untold Story Of India's First Newspaper, written by Andrew Otis, Copyright 2018 by Andrew Otis, Published by Tranquebar, an imprint of Westland Publications Private Limited. 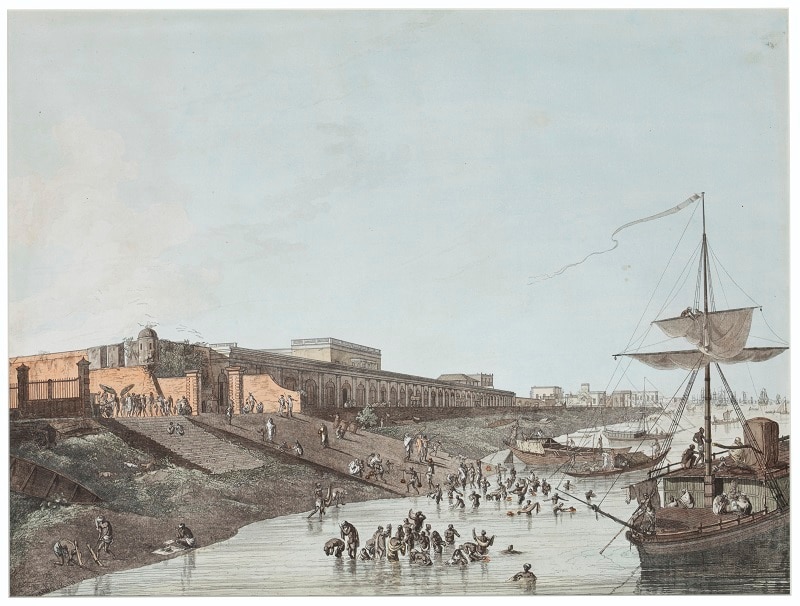 Old Fort Ghat in 18th century Calcutta, where Hicky would have landed upon arriving in the city. (Painting from Thomas Daniell's Views of Calcutta, 1786)

A Daring Bid To Silence Hicky

Hicky woke with a start, and stumbled over to his bedroom window. He peered into the blackness, bleary-eyed and confused. He heard yells and screams from below. "[What is] the cause of so much noise?" he opened his window and yelled.

He saw figures running in the dark. Three men were trying to break into his house. Two were Europeans and had cut open the rope that held his back gate shut with curved knives.

He rushed downstairs. But the men had fled before he made it down. He asked his servants who these people were. They said one was Frederick Charles, the owner of a public house in the city, and Messink's assistant at the theatre. Hicky had bad blood with Charles. When he had practised medicine in his first years in Calcutta, Charles had once refused to pay for a surgery he performed. He had to sue Charles to get his money back. Hicky pondered for a second.

Why would these people break into his house deep in the night? Why would they wish to attack him?

Then, everything came together like pieces of a puzzle. Behind Charles, he saw Messink. And behind Messink, he saw Hastings.

He was convinced it was an assassination attempt. Or, if not, at least a threat to silence him. He feared another attempt on his life, so he hired sepoys to guard his home and told his servants not to let anyone in without his express permission.

The warning might have scared some men, but it made him bold. If it was a warning to silence him, then he would do just the opposite. He was not intimidated. He would fight till every muscle in his body failed him rather than surrender his right to print.

He saw himself as the scourge of tyrants, the defender of free speech, and the protector of the people ... In a place where fundamental rights had been overturned and where the people lived in slavery, he believed [that] someone like him, someone with a free Press, might restore the people's rights and redeem their freedoms.