Bringing care to those who need it most, these extraordinary Indians are putting humanity first To Each, a Second Chance

The atmosphere is sombre this December morning at the New Ark Mission of India in Doddagubbi, north of Bengaluru city. Six residents—all of them elderly, terminally-ill and alone in the world when they first arrived—had passed away the previous night. People speak in hushed tones; the air is still. Only the voice of Thomas ‘Auto’Raja, New Ark’s founder, cuts through, dissipating the gloom.“It is a large number, even for us,” he says while waiting for the mortuary vans to arrive and other formalities to be completed.

Despite the sadness, the burly,bright-eyed 54-year-old seems able to find some acceptance in the knowledge that at least the Ark was able to offer the departed come dignity in their last days. Otherwise, “most of them would have died on the streets before being discovered by municipal workers,” he says.

In 2022, Raja will complete 25 years in the service of the homeless and destitute in the city of Bengaluru. The Ark’s large facility at Doddagubbi is home to 750 people, each of its three floors serving as a large dormitory. Lined in rows, the beds—some still in their bare metal frames—indicate room for more residents. As Raja walks the halls, a fragile, elderly woman, looks up and smiles at him in greeting. He goes over to those who call out to him and shares a quick chat in eitherKannada, Hindi or Tamil.

“I named the Mission New Ark after Noah's Ark,” he says, inspired by the Old Testament story. Biblical Noah may have been one of blameless piety, but not Auto Raja. In school,he was a bully, robbing classmates of their pocket money; his after-school activities included petty theft or gambling with people much older to him. He dreamt of becoming a donin Bengaluru. “I think I was like that because I never got love from my parents,” he says. He was kicked out of school, and his parents asked him to leave the house when the complaints from their neighbours and his victims became intolerable. He was in his late teens at the time.

Raja ended up in Chennai where he recalls robbing his place of work and even the home of an elderly couple who were kind enough to shelter him. They caught him in the act and handed him over to the police. Thirty days in prison as an undertrial changed Raja’s life. “It was hell. I realized this was not the life I wanted. I prayed and prayed, asking God to show me a way out, a way to atone for my sins,” he recalls.

Once released, Raja was determined to make a change. He took to driving an auto rickshaw for a living in Bengaluru and became an active member of the auto union, participating in many protests against unfair practices. Though he did end up in jail again, it was never again for misdemeanours like theft and burglary. Despite the 360-degree transformation, Raja was still unhappy. One day, he came upon a semi-clad woman, sleeping next to a public urinal on the streets of Bengaluru. “She was covered in filth, and people were holding their noses when they walked past her. Her very existence was offensive to them.When I went to her and held her hand, she smiled. It seemed like it had been a very long time since somebody had considered her a human being and touched her,” he recalls. That turning point led him to bring other homeless people he met to his house.Here, he fed and bathed them, tended to their wounds. Now the volunteers at the Ark do the same. Having started with 13 people in a rented house, Raja later expanded and built a separate home for disadvantaged children.

One of the more remarkable effects of Raja’s work is in the way he inspired others to give. One noteworthy example is T. V. Ravi Kumar, who is now a security guard at the Ark.Turned away by his brothers after returning from a mental-health facility, he found a home with Raja.When his brothers sold off family property in the city, Kumar’s share came to `80 lakhs. He poured the entire amount into the Ark’s account.He also refuses to take a salary for his job. “That money is worthless for me.I don’t know what to do with it. Here, I have a purpose and I am treated with respect,” Kumar says. 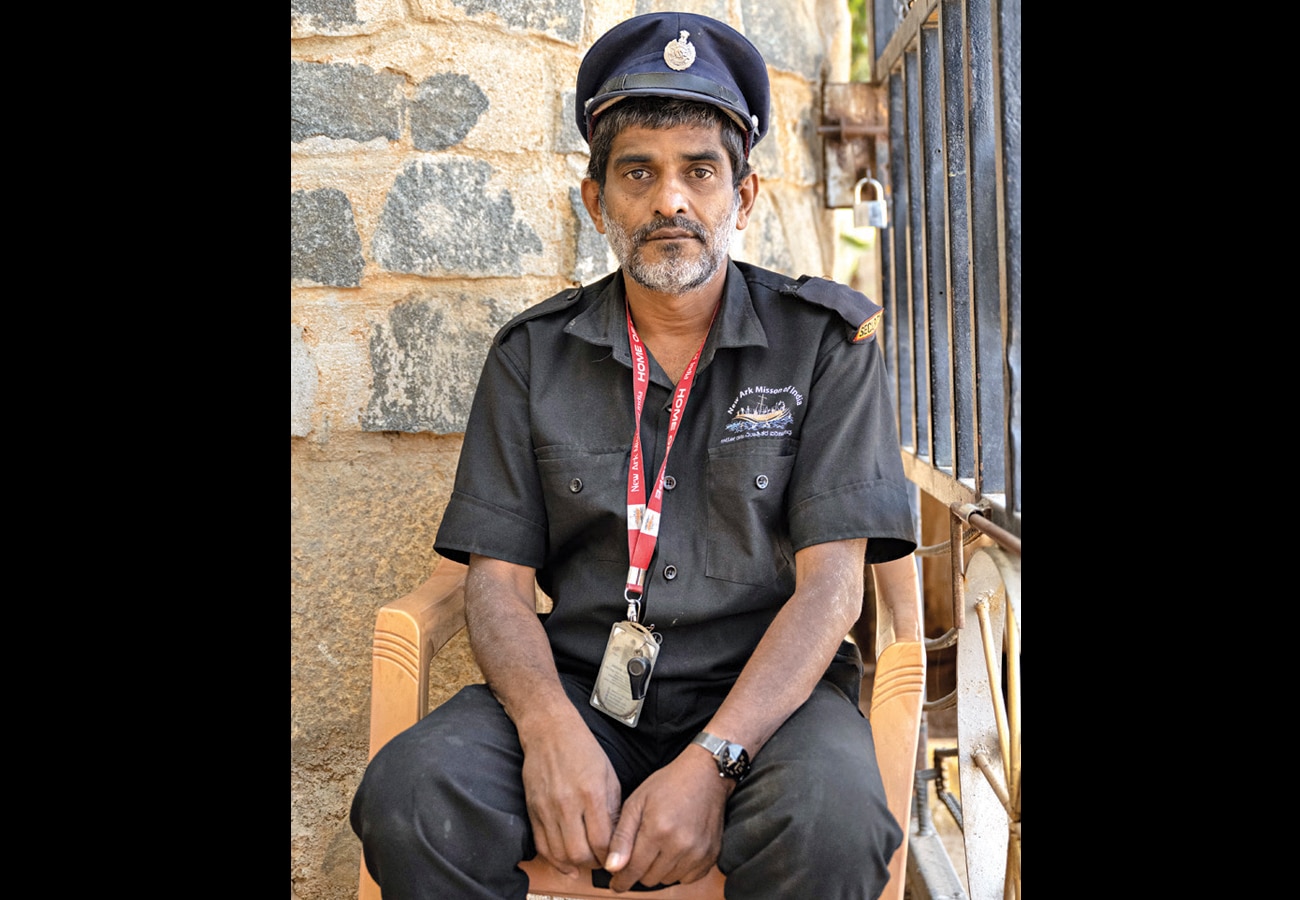 T. V. Ravi Kumar donated his `80-lakh inheritance to the Ark, where he now works as a security guard.

Raja’s vision for the Ark is that it be a home where the poorest of the poor—regardless of age, gender or religion—are given a chance to live a purpose-driven life. “We have brought pregnant girls here who were as young as 12. We brought in women in their twenties and thirties who had mental-health conditions and were living on the streets. Most of them have recovered and they are now volunteers at our home,” he says.Of his decades-long journey, Raja says, “My family once suffered greatly,and I didn’t take care of them. But this is my way of becoming worthy of the second chance I was given. This is God’s mission, and He chose me to serve these people. I don’t regret a single second of it.”