THE 100 FUNNIEST TWEETS EVER! Happy birthday, Twitter! The social networking app turned 15 this year, and thank goodness it isn’t older. Imagine if Ben Franklin had had a Twitter account. America’s funniest founding father would have spent his waking hours tweeting witty gibes against the king of England instead of helping Thomas Jefferson with his grammar. The United States might still belong to England.

Of course, Rodney Dangerfield would have had his unique brand of humour amplified in 280 characters, too, as would Dorothy Parker, Moms Mabley and George Carlin. Prior to 2006, the preferred humour networking platform was a vaudeville stage, a Catskill nightclub, or the Late Show with David Letterman. Today, the only stage required is a cell phone. Anyone can do it, but only the best appear here. See if you agree.

Does every Indian fridge have a half-cut lemon in the door compartment? @rubberneckin

If you are good at something, the Indian parent will ask you to prepare for an engineering entrance exam. @oinkoo

19-year-old neighbour keeps bragging about how much she loves ‘really old’ Bollywood films of the 80s. Wants it as her birthday theme. I just convinced her father to surprise announce her engagement with his business partner’s son right after she cuts the cake. @sonalkalra

Third wheeling a really toxic couple is so hard. So anyway, I’m out with my parents. @effemmelll

To the guy who stole my antidepressants, I hope you’re happy now. @EddyElfenbein

Sick of having to go to two different huts to buy pizza and sunglasses. @Leemanish

Honestly, Officer, I wouldn’t have pulled over had I known you were just going to criticize me. @bridger_w

I was once thanked by a grieving family member for coming to a funeral. I responded, “No, thank you.” @JAMIECLAIRITY

Just tried a coat on in T. J. Maxx. It was the coat of a customer trying on another coat. @LITTLECHIEF1982

Crabs always look like they’re walking themselves out of an awkward situation. @GreenishDuck

I’m not sure what’s more confusing, that we would celebrate killing two birds or that we would need to conserve stones. @RCKruseKontrol

I Drink, Therefore I Am

It’s a 10-minute walk from my house to the pub. Weirdly, it’s a two-hour walk from the pub to my house. @funnyhumour

Growing up, my mom would often say, “If you kids didn’t cost so much, I could drink wine that comes out of a bottle.” @Earth’ sOpinions

If I was stuck on a desert island with only one record, I would want it to be the record for being able to swim the farthest. @GuyEndoreKaiser

What do you mean I didn’t win? I ate more wet T-shirts than anyone else. @PeachCoffin

If I ever say the words “my fantasy football team,” just know it is code for “I’ve been kidnapped please help me.” @LauraBenanti

Every class is drama class when you’re in high school. @timothybird186

I interrupted their moment :(. @maevexob

Told my boyfriend I was going to start my period, and he said, “Again??” It’s like, you know what, you’re right. I’m canceling my subscription. @cULTMOTHER

Done with dating sites. I’m now focusing on pizza delivery guys because at least I know they have a job, a car and pizza. @LindaInDisguise

Till Death Do Us Part

Decided that the one phrase I do not want in my obituary is “died before his Botox doctor could revive him.” @ConanOBrien

My parrot died today. Its last words were “Darn, I think my parrot is about to die.” @SamGrittner

Weight Watchers Do people who run know that we’re not food anymore? @IamEnidColeslaw

Honestly, my biggest fear about becoming a zombie is all the walking. @gashleymadison

The serving size for pizza is ‘until you hate yourself’. @samir Eleanor Roosevelt once said to “do one thing every day that scares you.” Today, I’m going jean shopping. @jake_40k

Every neck tattoo should read “I’m not getting the job, am I?” @bazecraze

I bet when the first guy wore glasses everybody was like “Oh la-di-da, excuse me Mr I Need TWO Monocles.” @robfree

Haircuts are great because I did none of the work but get all of the credit. @ludwig

Liking the same stuff is one thing. But hating the same things? True friendship. @thisisjendoll

I’ve invented Twofacebook, the antisocial network. You start being friends with the entire world and defriend people one by one. @AndyBorowitz Insults

The most cutting thing you can say is “Who’s this clown?” because it implies they’re a) a clown and b) not even one of the better-known clowns. @skullmandible

Probably the worst thing you can hear when you’re wearing a bikini is “Good for you!” @ElizaBayne

Sometimes I want kids just so I can eat fish sticks for dinner. @ThatSusanBurke

My five-year-old hasn’t said a word in the car after I convinced him that the volume control on our stereo ejects his car seat. @Brianhopecomedy

I like having conversations with kids. Grown-ups never ask me what my third favourite reptile is. @SIMONCHOLLAND

My five-year-old after I explained the concept of breastfeeding: “Can you squeeze Capri Suns outta those things or just milk?” @tragicAllyHere

Sometimes at night, after my son has gone to bed, I go into my room and finish all my sentences. @PAULAPOUNDSTONE What should we call this giant advertising board? Phil: A philboard. Bill: I have a better idea. @InternetHippo

One of life’s great pleasures is to watch two idiots agree on something and then hear one of them say “Great minds think alike.” @RealSudoNim

When someone tells me “Great question,” I never hear their answer because I’m busy congratulating myself for asking such a great question. @DamienFahey

Great news: I got a 100 on my son’s geometry test. @RodLacroix

My mom said, “You know what I need? A selfie stick. So whenever I see someone taking a selfie, I can hit them with the stick.” @ManikivanaS

My grandpa covertly followed my mother to the grocery store, walked behind her until she put pickles in the cart, and screamed, “We’ve got pickles at home!” @bananapeele

Pretty much the most frightening part of my day is when I get a notification that my mother has tagged me in a post on Facebook. @CulturedRuffian

Me: Mom, if you could have any power, what would you want? Mom: Sleep through the night without getting up to pee. @PizzaAndMuffins

Going Mental One of my favourite games to play is “Is my headache from dehydration, caffeine withdrawal, lack of proper nutrition, my ponytail, stress, lack of sleep, not wearing my glasses or brain tumour?” @pmilbs_

All I see is hummus. @SophiaArmen

Tinder Is the Night @paul_lander

Just heard a guy at the dog park tell his dog “NO!” and then more quietly, “We talked about this!” @NicCageMatch

WHEN CATS ARE SAD Bartender: What’ll ya have? Cat: Shot of rum. [Bartender pours it] [Cat slowly pushes it off the bar] Cat: Another. @PhilJamesson

You’ll never be as lazy as whoever named the fireplace. @longwall26

Hi, Grandma? Can you come pick me up from my rap battle? It’s over. No, I lost. He saw you drop me off and did a pretty devastating rhyme about it. @ch000ch

Think you know the golden age of comedy? Prove it! Guess which of the following oneliners come from comic legends and which are from the Twitterverse.

1. The worst part about being a giraffe is having a lot of time to think about your mistakes when you’re sinking into quicksand.

2. I drink too much. The last time I gave a urine sample, it had an olive in it.

3. Why didn’t Han Solo enjoy his steak dinner? It was Chewie.

4. Health nuts are going to feel stupid someday, lying in hospitals dying of nothing.

5. My granddaughter wanted a Cinderellathemed party, so I invited all her friends over and made them clean my house.

6. Our scariest president was probably Rushmore, because he had four heads.

7. I was going to have cosmetic surgery until I noticed that the doctor’s office was full of portraits by Picasso.

8. Russian dolls are so full of themselves.

10. Think of how stupid the average person is and realize half of them are stupider than that.

When my wife gets a little upset, sometimes a simple “Calm down” in a soothing voice is all it takes to get her a lot upset. @TheNardvark

Before marrying someone, listen long and hard to the sounds of their chewing, because that’s the soundtrack to the rest of your life. @LizerRea

You know that guy who looks like that other guy in that show we used to like? He died. —How my wife and I communicate @WilliamAder

Spies like Us We can neither confirm nor deny that this is our first tweet. @CIA Wordsmiths

Just found the worst page in the entire dictionary. What I saw was disgraceful, disgusting, dishonest and disingenuous. @sixthformpoet

Autocorrect walks into a bar. Bartender says, “What can I get you?” Autocorrect says, “I’ll have a bear. A bare. Bier. Briar. Never mind.” @sween

“WHOM WHOM WHOM.” —Owl that never gets invited to parties @aparnapkin

In the Name of ... My daughter doesn’t know the word ‘braces’ so she calls them “tiny jails for your teeth.” @Lhlodder

What do you think Kid Rock and Chris Rock talk about at family reunions? @JimGaffigan

What idiot called it a ‘flyswatter’ and not a ‘splatula’? @mikecanrant

Who called it your foot ‘falling asleep’ and not ‘coma toes’? @chuuew

It Happens Every Time Every time a sexy woman jumps out of a giant cake, there is at least one guy who is bummed about the cake being ruined. @jonahhill

Every time I almost think humanity will be OK, I see someone struggle with the self-checkout for 20 minutes. @capricecrane 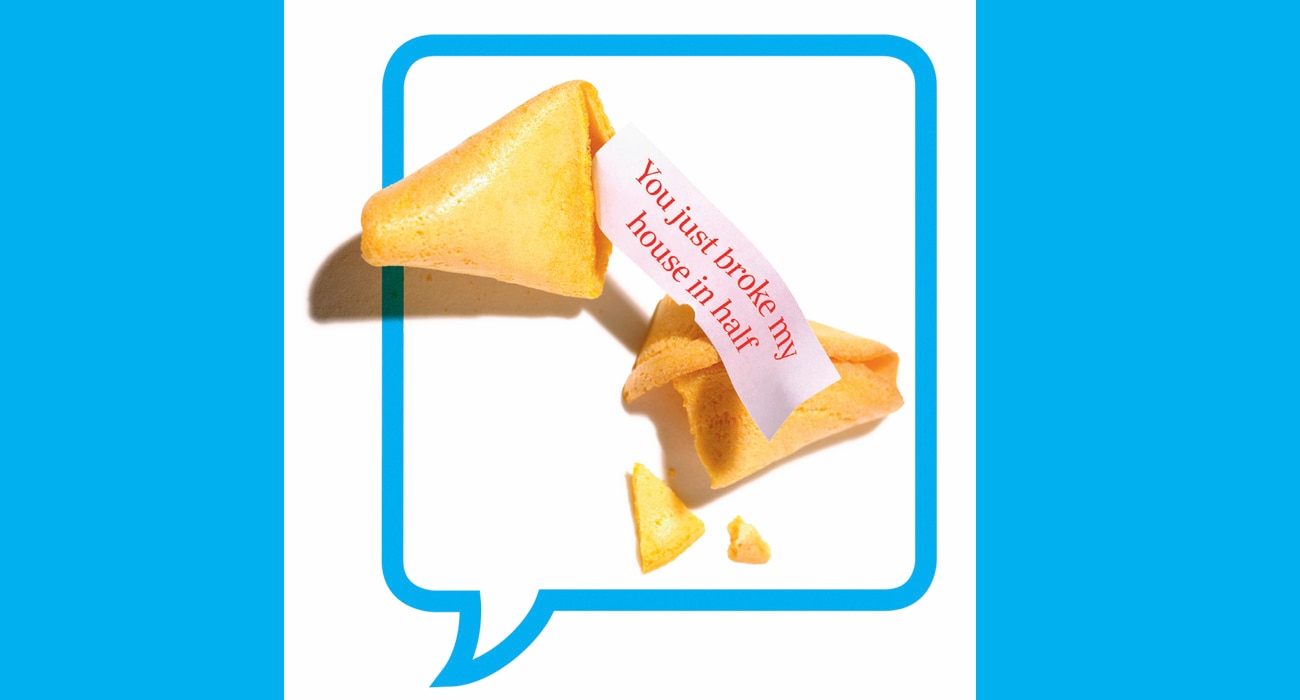 I wanted to go out tonight, but the avocado I bought this week will finally be ripe enough to eat between 8 p.m. and 8:15 p.m., so I can’t. @TanishaLove

Fortune Cookie: YOU JUST BROKE MY HOUSE IN HALF AND NOW YOU’RE READING MY JOURNAL. @BeardSpice

The best way to prepare cauliflower is by throwing it in the trash while ordering a delicious pizza. @NickYoussef

“It was a good thing I was born a girl, otherwise I’d be a drag queen.” @DollyParton

Just bought a book on narcissism. It’s great. It’s all about me. @marcmaron

Mom, Dad, I’m a gatherer. —Caveman coming out to his parents @AristotlesNZ

Weird Science How do they get the hurricanes to arrive in alphabetical order? @KenJennings

T NOW! What do we want? MORE TIME-TRAVEL JOKES! When do we want them? RIGH @johnfreiler

In a thousand years, archeologists will dig up tanning beds and think we fried people as punishment. @oliviawilde