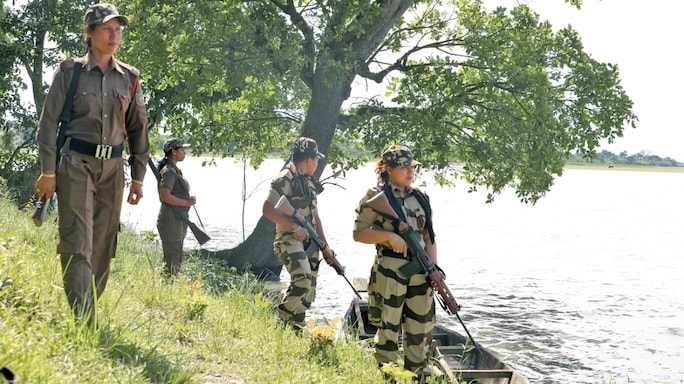 In Burapahar, the western-most range of Kaziranga National Park (KNP), it is the State Rhino Protection Force (SRPF)that guards the vulnerable greater one-horned rhinoceros. Alongside the group's 74 men, there are eight female forest rangers who have made it their duty to safeguard this sensitive region.

When I reach the Burapahar Rangeoffice in early September 2021, I find four of the eight—Jonti Sarkar, Beauty Pegu, Bhagyawati Gwala and Sumala Doley—chatting amongst themselves before duty begins. The women, all in their early twenties, are dressed in crisp, camo uniforms. SLRs (self-load-ing rifles) dangle from their shoulders.

As much as there are far more women opting for frontline forest jobs today, these women still make for a startling sight. While their fingers are wrapped around the comb of their rifles, their nails, I see, are painted;bangles rest alongside waterproof watches on their wrists; neatly bound in beautiful waterfall braids, their hair is carefully tucked under their caps. “But, don’t befooled”, says Jukti Bora, Forester 1 of the Burapahar range, with pride, “they are fierce”.

As these rangers open up to me about their life and work, their senior’s boast is vindicated.

Sarkar, Pegu, Gwala and Doley together joined the SRPF in 2016, and they have since become family. Assigned to Burapahar and parts of Bagori, they have been trained in river patrolling, false fire drills, the handling of arms and other highland duties to deter poachers. They work day and night, on land and on water (especially during the monsoon when Kaziranga famously floods).“I did not leave a single stone unturned when training these girls”, says Pradip Goswami, Burapahar’s former range officer. Because these girls have“junoon” (passion), he says, they often end up doing better than the boys. 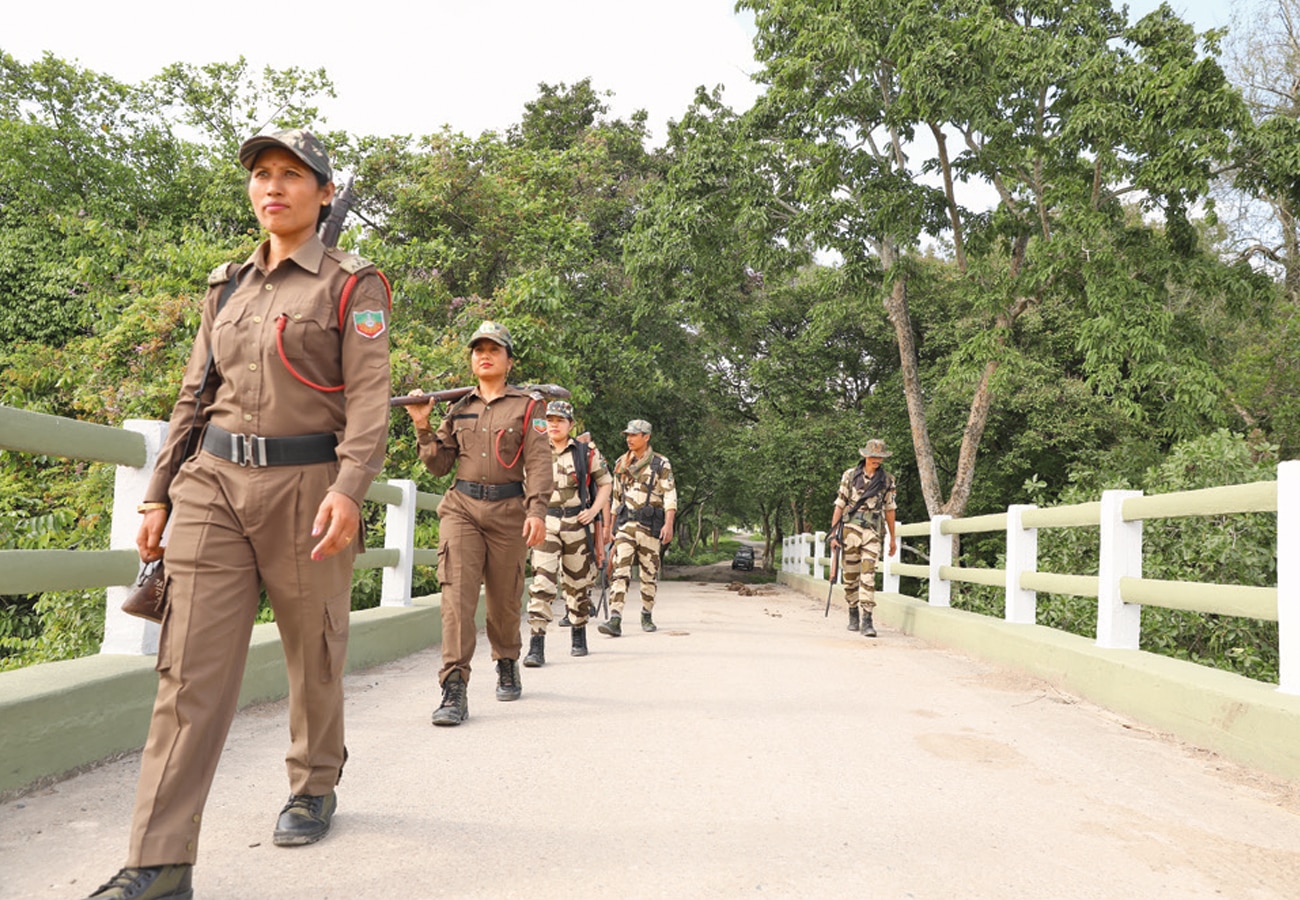 Women not only occupy positions with the forest department as rangers but also with the Assam police. Occasionally police cadets are assigned forest duties and they accompany forest guards along designated patrol routes. Photograph By Ivy Farheen Hussain.

For Doley, learning how to fire a rifle was crucial. Making the case that it helped build character, she says, “Once the bullet is out of the muzzle, no one can bring it back. Much like in life, it is an unforgivable mistake, so we have to be very careful. Firing discipline has changed my life.” Jonti Sarkar smiles and adds that it was the physical training that helped her build strength and confidence. “I tell my guy friends,‘Punch me all you want. I feel no pain!’”She says the joke often, but it still tickles her.

While some of these women rangers in KNP have undergraduate degrees,others have only passed high school.Interestingly, almost none of them have a wildlife or forestry background. They tell me that learning how to protect the greater one-horned rhino is the biggest learning they can get. Indeed, they seem perfectly sensitized to the cause of conservation without ever having attended a single wildlife or forest meeting, webinar, conference or workshop.

“They become experts at a very young age”, says Ramesh Gogoi, Divisional Forest Officer (DFO), Kaziranga National Park. “Almost on a daily basis,they encounter these animals and the opportunity to witness their behaviours. This makes them sensitive to the complexities of animals, and some of these people finally decide it’s their destiny is to protect them.

”Recalling their recruitment, the girls gush about how they were selected from a pool of 2,000-odd women applicants. Gwala tells me, “I was over the moon! I just couldn’t believe our luck.” During joint patrolling with the police, it is the female rangers who invariably end up being the first line of defence. When it comes to keeping the group safe, the police are said to trust them and their reflexes more. Pegusays, “Our police brothers depend on our SLRs, and we depend on them for encouragement. (From the left) Jonti Sarkar, Beauty Pegu, Bhagyawati Gwala and Sumala Doley speak to the author (far right) about their experiences as forest guards at Kaziranga.

”Pegu also likes to underscore how understanding her seniors can be:“When we are not in the best shape, our seniors consciously change patrol routes to accommodate us and our health. We,in turn, end up patrolling with more focus.” It is perhaps because of such conditions that female rangers in KNPdescribe their jobs as vocations, not duty. Doley, for instance, says, “Everyday, I wear my bangles, put on my bindi,pick up my gun and march to the heart of Kaziranga. I’ll not have my life any other way. I was born to do this!”

Gwala calls herself a rebel. Her Adivasi family in Assam’s Biswanath Charalihas for long struggled financially. As the youngest child in her family, Gwa-la’s decision to join the SRPF was nothing short of an open revolt. People in her family and neighbourhood said,“You are not a boy. How will you stay safe? How will you keep yourself safe from animals, from people?”

More than concern, however, it was the mocking of her physique that irked Gwala the most. Thin and lean, she willed herself to run, exercise and swim, eventually becoming even stronger than her brother. Soon enough, she joined the force. Today, she says,“Everyone calls me the ‘Protector of Kaziranga’ back in my village! They are so proud of me.” “Never turn your back to the animals,” the highly trained rangers caution our photographer, as they keep a weather eye on a pair of rhinos grazing with a calf at Burapahar.

Not everyone, though, faces the kind of resistance Gwala did. Bibha Sonowalwas the only girl in her family and decided to work at KNP after she saw that none of her brothers would carry on their father’s legacy in the forest service. Sonowal, who now works as a Forester 1 in KNP’s Kohora range, says no one batted an eyelid at her decision.Her in-laws and two sons, she adds, are extremely supportive as well: “There is nothing I cannot do. I love my sons, my husband, my family and similarly the forest. I look after all of them. I can not exist without either.” If her sons ever express a wish to join the force,Sonowal says she will encourage them fully: “My sons see me in uniform everyday. I’m glad that while protecting the forest, I am making sure I extend its future protection through my kids.

Women rangers like Sumala Doleyare also keen to disprove the assumption that the prospect of marriage and children make women unreliable forest service-people. Doley says she was back at work the day after her wedding.Having married one of her SRPF colleagues, the ranger adds that she and her husband are acutely aware of how risky their jobs can be, and why that makes it important for them both to have a job.

Sometimes, though, a bigger concern for Doley are the questions she gets asked in her hamlet—“Who are you patrolling with?” The four Burapahar rangers together think of Pallavi, a colleague who left in the early days of training, because no one would support her at home. “I urge all mothers to support their girls to follow their dreams. Children need to know their mothers believe in them,” says Doley.“I’m here only because my mother believed in me,” Gwala adds.

Arguing that male rangers are more compassionate than some of the men back home, Sarkar dismisses the barbs she hears: “If there is an emergency in my village, most of the time the men don't come to help. Here, if we are even in a tiny bit of danger, our team brothers don’t think twice before jumping to our rescue. That is what I tell my mom.Men here are better than those back in our village!”

Some of the credit for having built a humane, accountable system must of, course, go to the government of Assam and the Forest Department of Kaziranga National Park. Sarkar, for one,says she is grateful to the government for helping her realize her dream of becoming a frontline ranger. While there is no doubt that the government’s gender-equality provisions have helped strengthen the ranks of women rangers—KNP, for instance, now employs approximately 40 women in its force—there is still a need for greater social participation. 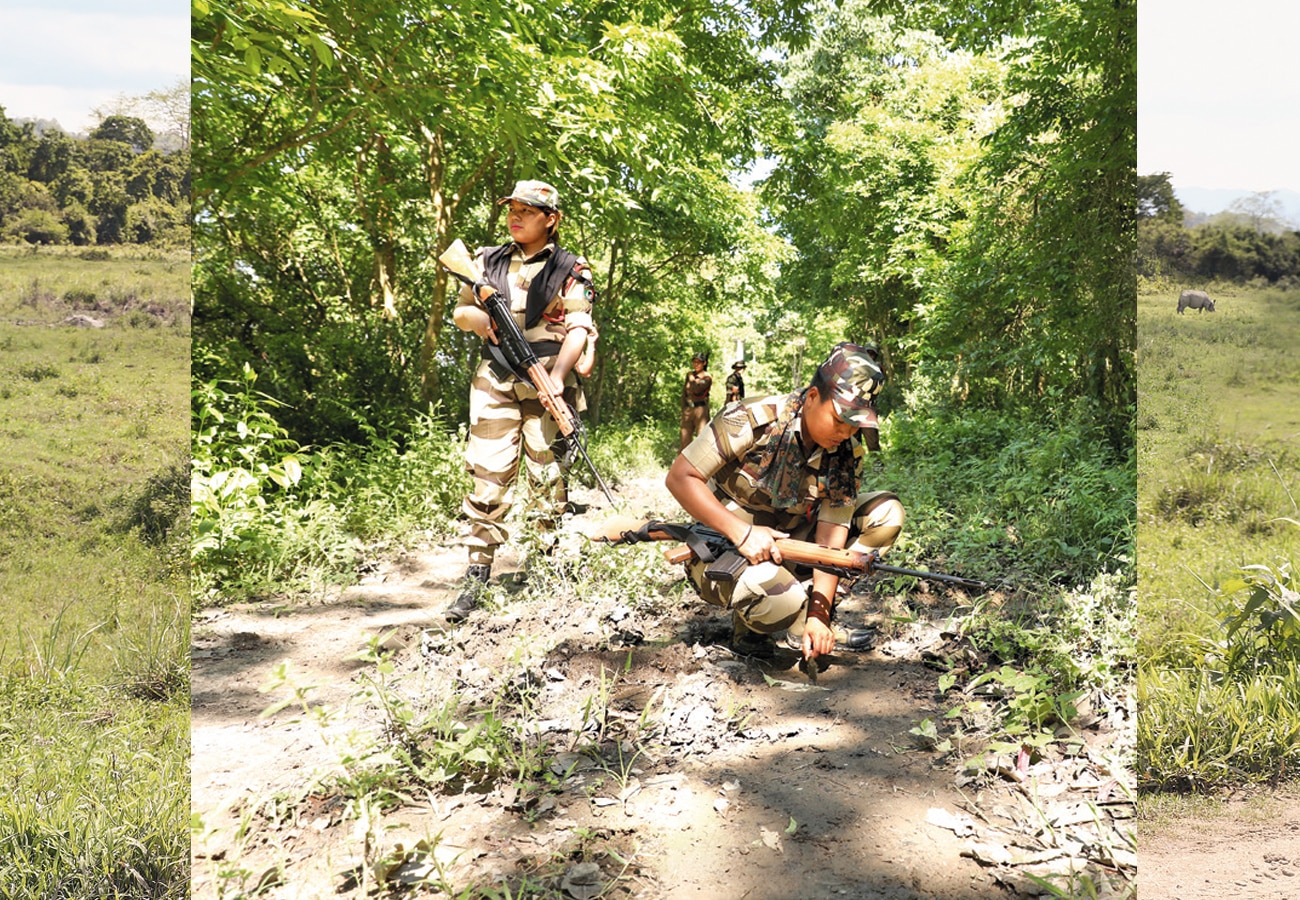 “The day parents will open a savings account for their daughters with both their marriage and education in mind,that is when we know society has changed”, Sarkar asserts. “Money is not everything, yes, but money, in the end,is everything to a deprived household. Girls nowadays need to be motivated to earn their own salaries."

Rohit Singh is director, WildlifeEnforcement and Zero Poaching, WWF Wildlife Crime ACAI. He also serves as president, Ranger Federation of Asia. According to Singh, “Field rangers have been masquerading as this exclusive macho boys club. Gender balance will take a lot more work and interventions.”

For women rangers, the Chitwan Declaration that was passed during the World Ranger Congress in 2019 was a crucial milestone. It recognized “the significant gender gap that currently exists in the Ranger profession”, while underscoring the urgent need to put in place policies that ensured equal opportunities in hiring, promotion and pay. The Declaration also said that appropriate on-site measures—separate facilities, for instance—needed to be taken “to ensure female rangers feel safe”. 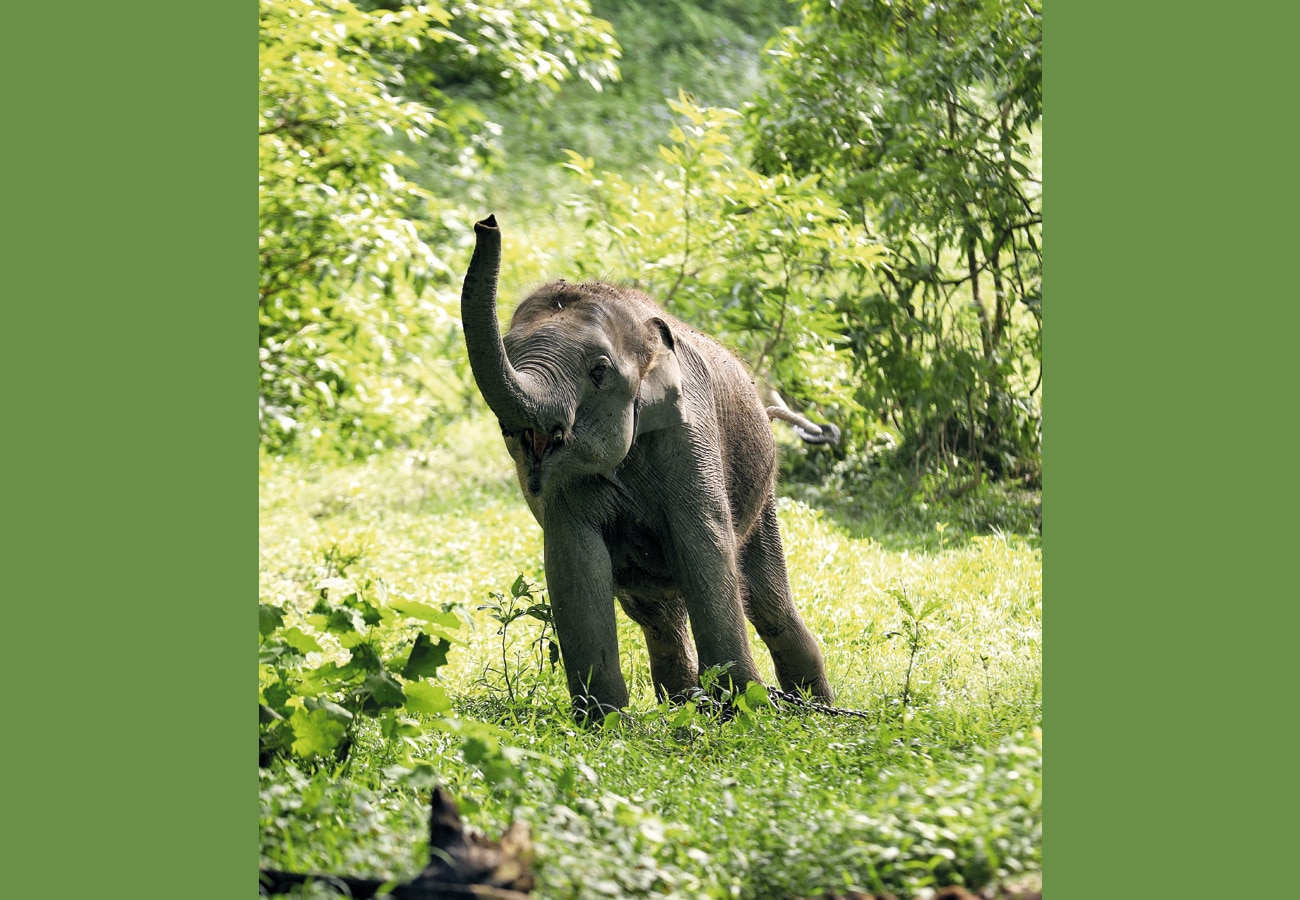 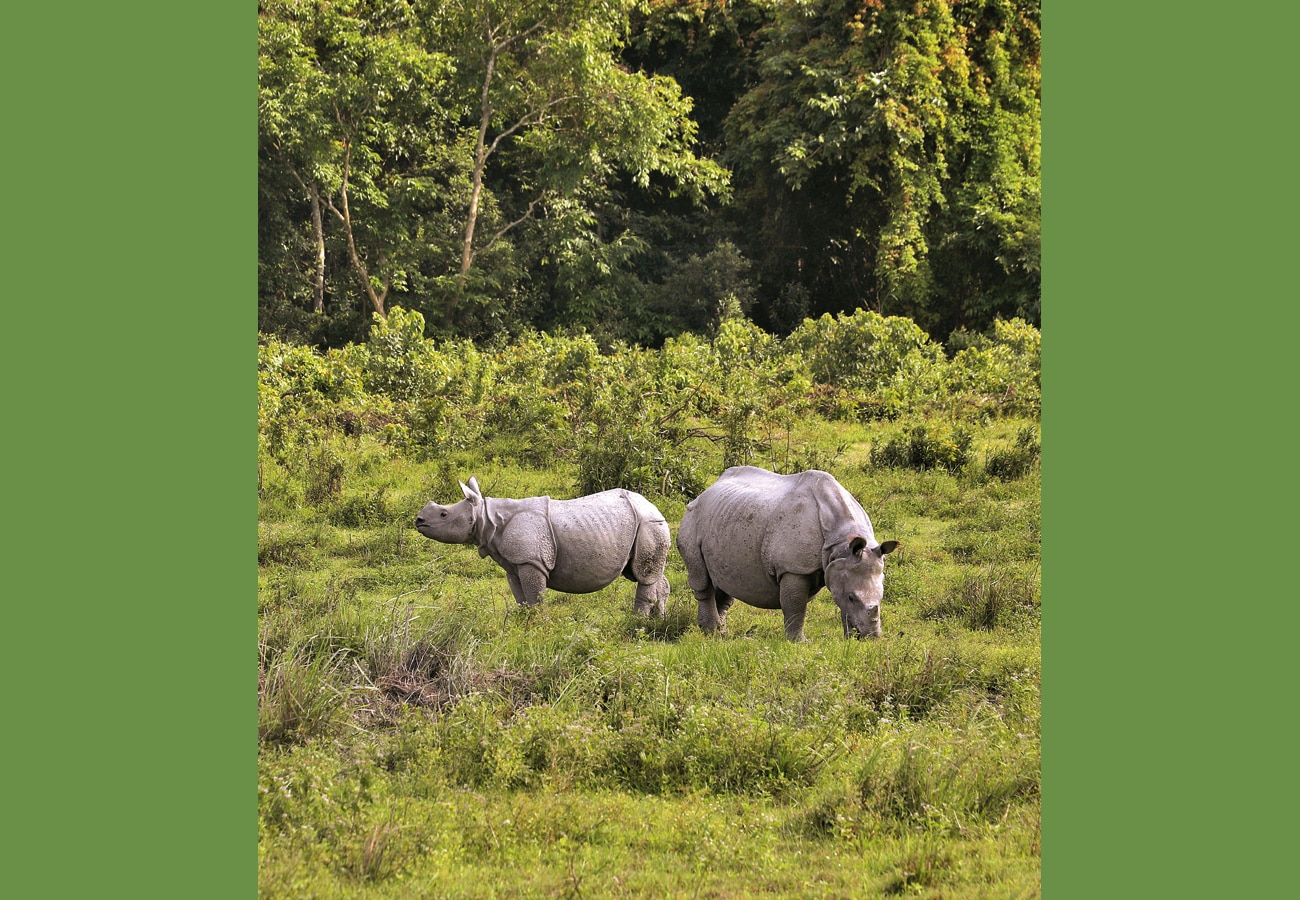 KNP is currently home to the world’s largest population of one-horned rhinos (below) as well as other threatened species such as tigers, elephants, wild water buffalo and bears.

But pointing to the Akashingas of Zimbabwe, the Black Mambas of South Africa and Assam’s SRPF, Singh talks about how these wildlife protection groups are encouraged to think of themselves as the best. Though this is done to create an atmosphere of inspiration, it can have results that are counter-productive. “This gives rise to elitism in the force,” explains Singh.Within Kaziranga itself, there are many women who work in different enforcement agencies—the police, the Sashastra Seema Bal and the Army.

Emphasizing the efforts of one group might demotivate others. This is why Singh takes issue with the celebration of 23 June as World Female Ranger Day: “Without having to create another day for them, what we need is to celebrate women rangers under the current umbrella of ‘Rangers’.” 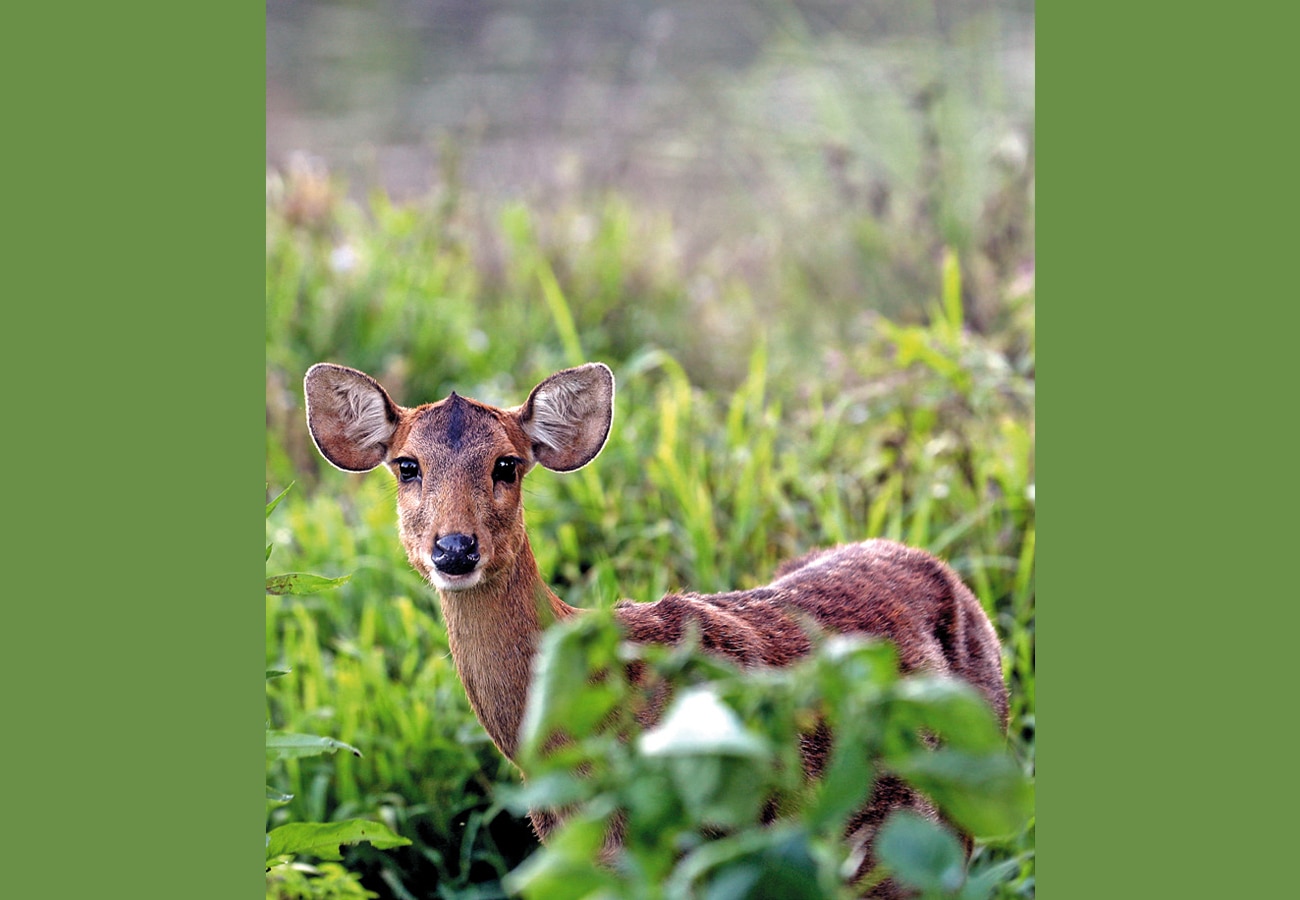 Singh goes on to add, “We don’t need to create additional problems when we already have many unsolved ones.” He remembers well how the first female forest guard from Rajasthan had stood up at a forum and responded bravely to a question from the crowd. When asked how women can be made to feel comfortable in the ranger workforce, she said,“Apne jaisa man lo! (Think of us as one of your own!)”.

At KNP, though, the presence of women enforcers—be they range officers, forest guards, Forester 1s or constables—is now looked at as a positive and a necessity. According to the DFO Ramesh Gogoi, women rangers perform at par with men: “They are as good in management as in command.”

About her juniors—Sarkar, Pegu,Gwala and Doley—Jukti Bora says,“These girls have opened the door of possibilities for not just girls and boys in their villages, but also for parents and children all over the state. From tourists to officials, everyone is astounded to see them work so diligently. Their presence has inspired many.” Bora makes clear one fact: In Kaziranga, it’s the women who are driving change.

Do You Like This Story?
33
1
Other Stories
Please enter valid text
Must Reads
Latest Issue