When Tara Showed Me The Way

This Father's Day, lessons from an eight-year-old on focus, obsession and perseverance 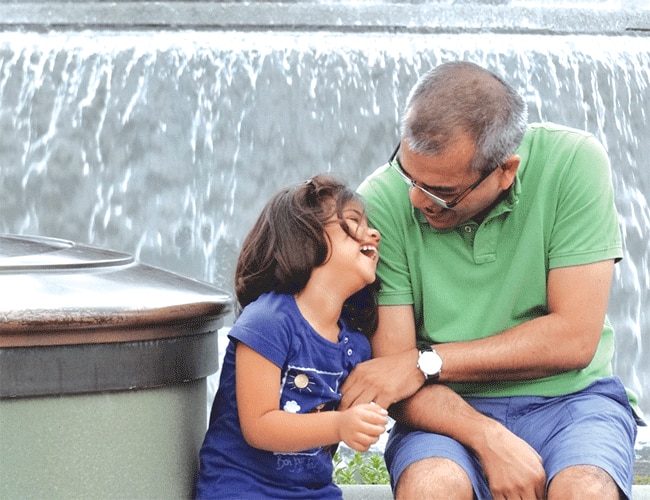 The author shares a light-hearted moment with his daughter, Tara.

Tara is a screen kid. As a baby, she was never really fascinated by those colourful, rotating toys. The day she saw her first moving object on television, she was transfixed. That love affair continues. It started when she was about two years old with shows like In The Night Garden and then quickly moved to Barney & Friends, every episode of which was devoured over and over again. I used to be perplexed by her ability to watch the same thing infinite times. I was told by friends and family, it's normal.

Kids like repetition. But soon I began to form a different theory.

By the time she was four, Tara had moved on to an iPad and the popular YouTube baking show, Nerdy Nummies. For a girl who hated pink, dresses or anything with a lace edge to it, this fascination with baking puzzled me. She was running through our monthly broadband bytes in a couple of weeks. This wasn't repetition---it was obsession. Her concentrated attention to the show was at times stressful as she wouldn't respond to her name being called out, no matter the volume or the frequency (her mother Pallavi is the same and all these years I have been thinking she has been deliberately ignoring me. It's not me, it's the genes!).

One Diwali, when Tara was five, we landed up at a dear friend's home in Delhi. Jiya, the daughter of the house---about five years older than Tara---loved baking. One morning, I noticed the two girls poring over a large box. Objects were being taken out, examined and a serious, almost professional, conversation was afoot. Intrigued, I enquired, to be told by Jiya: "I am showing Tara my baking stuff." "Babi, Jiya didi doesn't have a fondant tool," Tara replied. "Yeah," said the older and wiser Jiya, "must get one." Then they lost all interest in me and went back to their baking box. Until then Tara had not baked a thing, but she seemed to know everything about it.

Then Rosanna Pansino, the hostess of Nerdy Nummies, wrote a cookbook. Tara rarely read at the time. The book was bought and I saw her flipping a few pages but that's about it. One day, when I was picking her up from school she announced she was going to bake a rainbow cake over the weekend and I was going to help her. I nodded indulgently and told her I would, only if she could tell me the recipe. In a clear monotone, a precise step-by-step recipe---with ingredients, measurements, time and oven settings---was recited. It was my own private Nerdy Nummies' episode.

So you think baking is her life now? No, she appears to move from one obsession to another. Almost like she wrings the last detail out of a subject until it screams for mercy and she finally tells herself, "Okay, got that, what's next?"

Nerf guns. Yes, Tara has a dozen of them. Those orange plastic ubiquitous objects that attract a certain type of kid as the North Star draws the intrepid traveller. To me, each gun looks like the next. For Tara, each one is distinct, with its own specific use.

The other day, at a Hamleys toy store, trying to spend her birthday vouchers, we stumbled from one section to the other. We passed rows of toys, until we turned a corner and a sea of orange hit us. Her eyes lit up and her face split into a wide smile. She picked up a gun, caressed it, kept it back. Then coming to a halt, she pointed at it and asked, "May I have that?" It looked exactly like the ones at home.

"What's so special about this one?"

"It has high-precision bullets."

"Really? Why are they more precise than the others? They look the same to me!"

"They have little cuts that make them more accurate," she said pointing them out to me.

Obsession. Focus. The desire to know everything there is to know about what interests you.

So, is Tara joining the army, then? Has she forgotten about her baking? No, we bake chocolate chip cookies. When we visit her aunt, an expert baker, in Abu Dhabi, a day is devoted to red velvet cookie production. She moves from one subject to the next but retains her knowledge of each.

This aspect of my daughter has left a deep impression on me. Without any conscious thought, I have become more focused on my area of work---brands, marketing, strategy. I have started curating a newsletter on my own for business and marketing professionals. I read over two dozen articles a day to make sure my newsletter is the best it can be. It has been an instructional few years and I am a better professional today than I was eight years ago.

The other day, she asked me to type "Greek mythology" into her YouTube browser. Looks like a trip to Athens is coming up!