What Your Pet Is Trying to Tell You 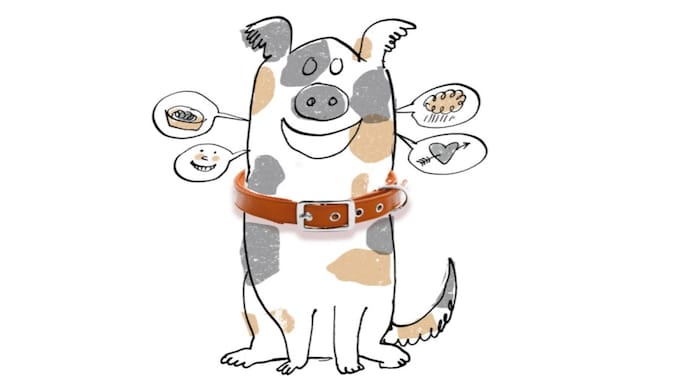 1.Put down your phone! Animals want our attention, and sometimes they’re quite overt about asking for it. Antics are often our pets’ way of telling us to stop what we’re doing and play with them. It’s why Fido constantly chases his tail and why Kitty keeps rolling around.A desperately bored pet may resort to ‘bad behaviours to elicit a reaction—even a negative one!

2.Feed me. Sure,your dog loves you,but that’s not why he's licking your face. A puppy learns to lick his mother's mouth to snag a little leftover food, so Spot isn’t kissing you in our sense of the word;he just wants a snack.

3.I’m stressed.Cat owners also misinterpret their furry friends’ kisses.While a cat might lick you to show affection,sometimes she’ll do it to soothe herself. One way to tell if her licking is stress-related is if it goes on for an extended period of time. Birds also over-groom when they feel anxious. Some will even pluck out their own feathers.

4.My tail tells all.Dogs wag their tails to the right when they see something (or someone)they want to approach,and to the left when they see something they want to avoid.When frightened,dogs tuck their tails in, while cats wrap theirs around themselves. And if a tabby’s tail looks like a question mark, she’s itching to play—especially if the tip twitches.

5.Don’t dismiss my accidents.A house-trained dog that suddenly goes on the carpet could simply be dehydrated,but he could also have kidney failure, liver disease or diabetes.And a cat that sprays outside her litter box might have kidney stones or a urinary tract infection, so mention your pets’ accidents to the vet, especially if they keep happening.Once you rule out a medical issue, try getting another litter box for your cat. If he keeps missing, he probably dislikes the box or wants another. (Cats generally need more than one.)

6.I can’t even look at you. At some point you've probably uttered these words to someone who made you angry. Dogs think similarly, avoiding eye contact with anyone who spoils their mood. Another sign of ire: yawning. A yawning pup may not be tired but agitated,not bored but stressed.Similarly, lip-licking—when there isn’t food around to trigger it—is another sign of duress.

7.Let’s stay in.You might think your pooch is running around the backyard, having the time of his life while you're away. But the reality is that he most likely just sitting in one spot for hours,anxiously waiting for you to return. Dogs actually prefer to be inside, ideally with their owners.

8.But I do need alone time. If your dog seems scared (because he’s hiding, say, or excessively panting), but showing no obvious signs of distress, try giving him a break from people—yourself included. Even the most attention-hungry hound can benefit from having a calm space of his own to relax in,even if it’s just a crate.

9.Take my rear end in your face as a compliment. When a cat presents you with his behind, it means he sees you as a maternal figure, since he used to do that as a kitten to get his mother to groom him. Another sure sign you've won his heart is if he blinks slowly while looking at you. He isn’t tired: He’s showing that he's comfortable letting his guard down around you. Likewise, a dog that shows you his belly isn't just inviting a rub.Rolling over is a sign of submission, which is how dogs convey trust.

10.My tummy hurts. If your dog arches his back while tucking his belly up, he’s in pain—likely gastrointestinal discomfort, but it could also be his back. A crouching cat could also be hurting, usually in the chest or abdomen. But if a tabby tilts her head to one side,it might mean she has pain there. If any of these postures persist,have your vet help you pin down the issue.

11.A storm is coming. When your dog bugs out, pay attention—especially if you live near a fault line. Even if you see clear skies, your pup might be sensing barometric pressure changes or even smelling the impending rain.The Max Planck Institute of Animal Behavior found that dogs can detect earthquakes up to 20 hours ahead of time.

12.I might be depressed.Pets have mental-health needs too. Disinterest in food or favourite activities is a tell tale sign of depression. A dog that pulls her ears back is likely experiencing anxiety(though she could also be suffering from a near infection). Mention these behaviours to your vet, and don’t be afraid to ask about pet anti-depressants.

13.But you make me so happy!When they wiggle and wag their whole bodies, your dancing dogs and bouncing bunnies are literally jumping for joy. Birds that bob up and down and cats that come when you call them are showing their appreciation foryou. And when your pets put their paws on you, seemingly for no reason, they're gently showing you their gratitude.