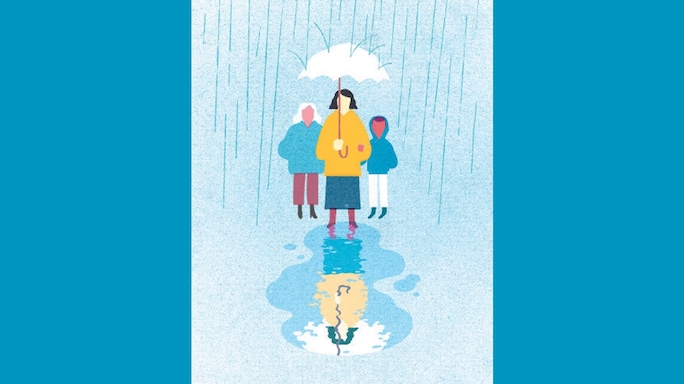 Dolores Pian didn’t want to believe her friend could be a bad person. They’d been close since 2000, when the two met at an event for work. About five years ago, though, the 59-year-old interior designer started questioning why this friend was always mean to her—and only to her— at get-togethers. When Pian’s feelings were obviously hurt by an insult, the friend would respond by buying Pian a gift or taking her out for dinner.

Somewhere along the line, Pian started rationalizing her friend’s behaviour: If her pal could recognize her bad behaviour and make amends, surely the next gathering would be better. Or maybe if Pian was even nicer herself, the nastiness would stop. Pian stuck around, a response she says came from the high expectations she’d had early on for their bond. “You kind of create a lie to keep the illusion,” she explains.

We deceive ourselves from time to time—or sometimes on an ongoing basis—about major parts of our lives. We do it to stay comfortable or to avoid the inconvenience of making a big change. Ultimately, though, learning how to be honest with yourself can pay huge dividends.

According to a 2016 study in Social Psychological and Personality Science, when it comes to self-perception we tend to assume others view us positively, and usually correctly guess when someone feels that way. We are less adept, however, at recognizing when we leave negative impressions. As a result, it’s easy to stay deluded about our undesirable traits unless we’re directly told otherwise.

Although Pian’s friend was the cause of her self-deception, those in our communities can often be the key to seeing ourselves more clearly. “Develop a support network of people who are honest and have integrity,” suggests Tatiana Sean, a certified clinical counsellor based in Abbotsford, British Columbia. “People who are comfortable giving you feedback even if you don’t like what you hear.”

One thing this network can be especially useful for, says Sean, is noticing what you are defensive about. She points out that if you find yourself repeatedly justifying your choices or actions to the people in your life, it would be good to take a closer look in the mirror. They might be giving valid criticisms that you don’t want to acknowledge. For example, it’s normal to get defensive when your friends call you out for potentially dangerous behaviours such as budding alcoholism, but Sean says, “Ask yourself, would they say things to hurt you just for the sake of saying them?”

Even better, instead of becoming immediately guarded, Sean suggests following up with open-ended questions: How did you come to that conclusion? Why are you telling me this? What do you think I should do? According to Sean, asking friends for specific examples of your behaviour can help clarify the issue.

Once you’ve become aware that you’re lying to yourself, the next step is figuring out why. Kathryn Bollich-Ziegler, an assistant professor in the department of psychology at Seattle University who researches self-knowledge, explains that self-enhancement—when you try to make yourself out to be greater than you really are—is one of the most common ways that we partake in self-deception. “Typically, people see themselves as better than average, are overly optimistic about their futures and claim credit for successes, while dismissing failures,” she says.

This type of distortion of the truth can have serious consequences. For example, Bollich-Ziegler says a person who holds an unrealistic view of their health might opt out of preventive treatments. Or, she says, “They may try to discredit the expertise of a doctor who suggests a behavioural change like dieting or exercise.” On the other hand, if they can admit they’re lying to themselves and seek help, they might actually have a chance to become as healthy as they pretend to be.

Lee Weisser, the director of career services at the Toronto office of Careers by Design, says that many people tell themselves they’re satisfied with their work even though it’s only the security of their job that keeps them there. “They may stay because of the promise of a pension even though they hate the work environment,” she says. In her 10 years advising clients, though, she’s found that when she coaches them to clearly articulate their accomplishments to themselves, they become more willing to take risks. And those leaps of faith have big payoffs—her clients not only find more fulfilling work, but also become more confident in their lives overall.

While a counsellor can help you explore whether you’re just pretending you’re satisfied, you can dig deeper on your own, too. “One thing that often helps a client see their situation differently is when I ask, ‘If you had a friend in this position, what would you tell them?’” Once you figure out what advice you’d give your friend, you might find fewer excuses not to take it yourself.

If you come clean with yourself, you’ll have a better sense of what actions to take to align your life with your true desires. In Pian’s case, she eventually had enough of trying to appease her mean friend. “It was like coal to a furnace. You keep throwing coal in, but the room is never hot enough,” she says. In an effort to understand the root cause, she began tracking the times her friend was mean and discovered that it was always when she was drinking alcohol. When Pian confronted her friend about the pattern and it didn’t change, she began to see her less in order to create a healthier boundary.

Nowadays, Pian abides by what she calls “the rule of three” when she reflexively blames herself for an uncomfortable dynamic. Once or twice may be a coincidence, but “three is an established pattern,” she says. When that’s confirmed, she knows to question the internal voice that says it’s her fault.