Pick Up A Ukulele To Bring Out The Musician In You

If you are a beginner, a ukulele can be the perfect string instrument for you to learn music 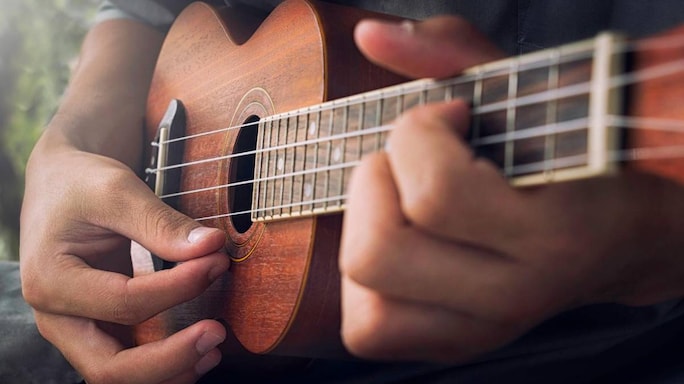 Music is known to have therapeutic effect. On a stressful day, listening to your favourite song can help lift your mood. Some research suggests that learning to play a musical instrument can improve your brain’s ability to “master tasks” that involve language skills, memory and attention.

If you want to learn to play a string instrument, you can perhaps consider a ukulele. It looks like a miniature version of a guitar with four strings, but music aficionados would call it a travesty if you were to compare ukulele with a guitar.

Is it a Hawaiian instrument?

Most people associate ukulele with Hawaii where the instrument rose to immense popularity under the patronage of the royal family, especially Kalakaua, in the late 19th century. The king himself learnt to play the instrument and ukulele became an integral part of the Hawaiian culture.

However, the musical instrument traces its roots to the Portuguese braguinha. Legend has it that a Portuguese immigrant on reaching the Hawaiian shores started singing and strumming his braguinha. “The crowd of Hawaiians were so impressed by his fingerboard prestidigitation that they called the instrument “ukulele,” which translates to “jumping flea”,” writes Marion Jacobson for The Atlantic.

While the nature of the body determines the ukulele’s sound, the neck features the four strings. And, there are different kinds of ukuleles—soprano, concert, tenor and baritone. The standard or regular ukulele is the soprano version while the concert ukulele is roughly two inches longer than its soprano counterpart. The other two variants are longer than a concert ukulele and offer more volume and deeper tones.

For beginners, one of the factors that work in favour of a ukulele is its affordability. The instrument became extremely popular in the US during the Great Depression years. “As sales of pianos, accordions, and other pricey instruments soared, saving and scrimping Americans helped boost the ukulele to peak popularity in the 1930s,” writes Jacobson in The Atlantic.

It is also an accessible instrument unlike a piano or a guitar that can intimidate beginners. Thanks to its small size and soft nylon strings, it is easier to play a ukulele than other instruments that come with metal strings.

So, pick up a ukulele and learn to play your favourite songs on the instrument!